Stardate 5928.5
The U.S.S. Enterprise races to Camus II, where several archaeologists exploring the ruins of an ancient alien civilization have fallen ill due to deadly radiation poisoning.
The scientist team leader is Dr. Janice Lester (Sandra Smith), who once had a tumultuous romantic relationship with Captain Kirk (William Shatner), but covets his success as a Starfleet captain.
With the aid of her lover, Dr. Coleman (Harry Landers), Dr. Landers engineers a plan to get Kirk alone, and then use an alien transference device to switch bodies with him.
This strategy goes as planned, and when Captain Kirk awakens after an assault, he finds himself trapped in Janice’s body.
Janice, meanwhile, has assumed command of the starship Enterprise.
Soon, however, the Enterprise’s top officers begin to detect disturbing changes in the captain’s personality, and attempt to talk with the defensive Lester about them. When Spock learns that Kirk is trapped in Lester’s body, Lester arranges a court martial on charges of mutiny, and plans the execution of Spock.
Scotty (James Doohan) and Dr. McCoy (DeForest Kelley) attempt to intervene, but Janice Lester plans to hold them on charges of mutiny, as well. 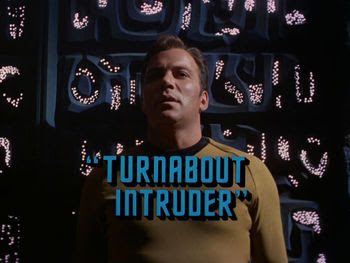 “Turnabout Intruder” boasts some strong, powerful moments, yet overall is a sad and ugly way to end the run of such a brilliant series.
As Star Trek’s final episode, “Turnabout Intruder” is notable.  Yet it is also notable for being one of those rare Treks that loses sight of the series progressive philosophy, and relies instead on dated 1960’s social context.
Here, for example, Janice Lester is a “mad” woman who simply doesn't know her place. She takes command of the Enterprise by illicit means because Starfleet apparently doesn’t have any women captains, and then is revealed – because of her womanhood -- as a person temperamentally incapable of the duties of command, thus validating Starfleet’s admission policy.
The episode’s coda – the last “new” moment of live action Star Trek for a decade – sees Kirk musing that Janice’s life could have been as rich as any “woman’s, if only...” 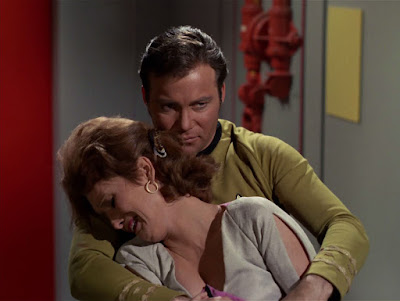 Perhaps it is better that he didn’t finish that sentence.
If only she knew her limitations?
If only she had set her sights lower?
If only she had realized women can’t be starship captains?”
If only she'd accepted the hand biology had dealt her?
Because of Kirk's trailing off, Star Trek fans, for generations have attempted to fill in the gap in a way that isn’t sexist or offensive.
They have tried to ret-con the episode in a way to make it fit in with the universe we know Star Trek tried to depict, but -- if we are being totally honest -- sometimes fell far short depicting.
But the intention of the episode is clear, to disqualify women as captains, or leaders. 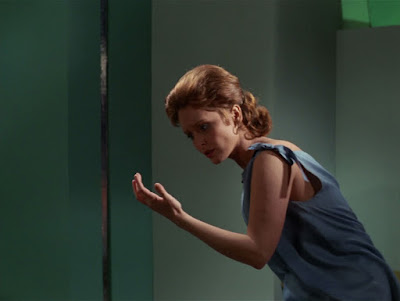 Star Trek is so forward-thinking in so many ways, but we have nonetheless seen some terrible moments directed at women in the series' three seasons. “The Changeling” had a notation from Spock about women being a mass of conflicting impulses. “Elaan of Troyius” had Kirk stating that Vulcan was the only planet in the galaxy that could claim that it had logical women.
And here, we get a woman who doesn’t know her “place,” and doesn’t accept the role that her gender has assigned her.
As much as I deeply respect the series' lead actor, this episode is made exponential worse by Shatner’s performance. He plays Lester’s Kirk as a prissy, nail-filing temptress, who gives into fits of hysteria and bug-eyes rage. I understand he was ill when this episode was shot, so I won’t belabor the point. 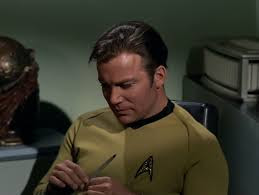 Sandra Smith, by contrast, does an excellent job of playing Kirk in Lester’s body, coming off as a highly believable and grounded incarnation of the good captain.
So why did I write, above, that “Turnabout Intruder” has some powerful moments?
Well, Mr. Sulu (George Takei) gets one of his best moments in the entire series in "Turnabout Intruder," refusing to stand-by and take orders while an execution has been ordered. This is a powerful statement of individual principle, and one that arrives at the height of the Vietnam War, to boot.  Instead of "just following orders," Sulu refuses to go along with the impostor Kirk's orders.
Scotty also comes off beautifully in this episode, planning a “mutiny,” and thinking out the ramifications and repercussions of every step the mutineers must take to save the real Kirk, and Spock from execution. I wrote about this aspect of the series two weeks ago, but it was clear that Scotty was becoming much better developed as a character in the third season.

Not unexpectedly, the Spock-Kirk friendship is also reinforced brilliantly here, as Spock shares a mind-meld with his friend, and recognizes him, despite the unusual physical shell that houses his identity. Once Spock knows what has occurred, he becomes a tireless advocate for his captain and friend, just as he once was for Christopher Pike in “The Menagerie.”
There may even be some social grounds upon which one can gaze at the episode as forward thinking.
Consider poor Dr. Coleman for a moment. He is a man who fell in love with Janice Lester as a female. He completely commits to her (crazy) plan, which means that -- if Lester is successful -- she will be a man for the rest of her life. Yet Coleman is presumably attracted to her as a female, not as a male. 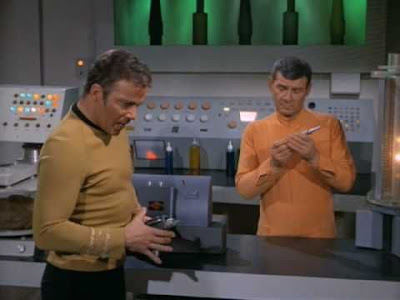 So Coleman’s love, while misguided, is oddly loyal in a way. He is willing to put aside his own needs and desires in the relationship, so that Janice Lester can achieve hers needs and desires.
In some weird way, "Turnabout Intruder" also suggests that gender can be defined by more than one’s set of genitals. Kirk’s identity -- as a starship captain and man -- is confined inside Janice’s body. But there is no doubt that he remains Captain Kirk, no matter his outward appearance.
Finally, if one is looking for some -- any -- grounds upon which to view the episode as not horribly sexist, one can gaze at the fact that Janice Lester is a brilliant scientist, and the leader of her team. She has risen to command, and proven that a woman can command.
It’s not much, but it’s what we have to hold onto here. “Turnabout Intruder” is an apt name for the episode. The egalitarian, equality-seeking Star Trek we all know and love is replaced, temporarily -- brutally usurped -- by this backwards-looking, heavily-dated final episode.
This is a weak note to go out on, and a sad chapter for a brilliant, inspiring science fiction series.
at September 10, 2022