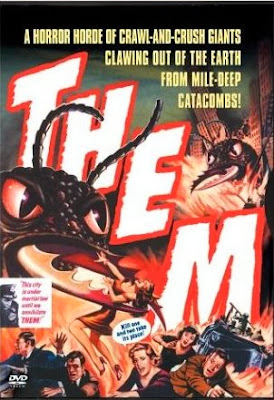 "When man entered the atomic age," warns Dr. Harold Medford -- our oracle of wisdom and science in Gordon Douglas's sci-fi chiller, Them! (1954) -- "he opened a door to a new world."

And what terrors exists in that "new" world?

Well, according to Medford, "no one can predict..." But if Them! is any indication, our planet today should be overrun by gigantic, whistling, man-eating ants...

Since I was a kid, Them!, starring James Arness and James Whitmore, has been one of my absolute favorite 1950s horror flicks. Like It Came From Outer Space, directed by Jack Arnold, the film regards  the terrain of the desert as a strange, alien place where mysteries hatch in secret. "The wind is pretty freakish in these parts," one character explains early on, and indeed much of the film's first hour involves the desert, and its unknown terrors.

Is that the wind howling, you may ask, or the whistle of a giant, malevolent ant? 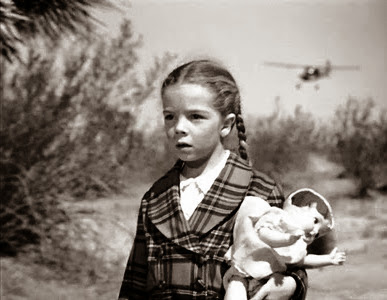 Them! commences with an impressive aerial shot of an adorable little girl thoughtlessly clutching a baby doll as she walks aimlessly through the vast desert, until rescued by the police.

This little tyke survived an attack by giant mutated ants, apparently created when the U.S. government detonated an atomic bomb in the sands of New Mexico nine years earlier.

This fantastic mutation, caused by "lingering atomic radiation," represents a new breed of pest: a savage ant colony where the smallest warrior is still nine feet in length.

If these ant colonies aren't destroyed quickly, mankind will become an extinct species within a calendar year.

"We may be witness to a Biblical prophecy come true," Harold Medford realizes with slow-dawning horror... 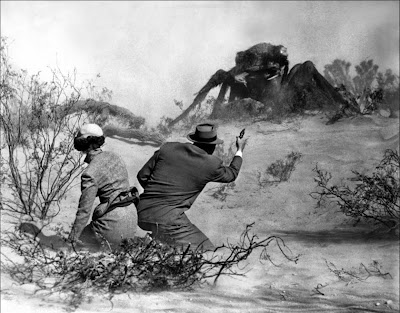 A lean 94 minutes in length, Them! jumps confidently from strength to strength. For the first half-hour (or at least 28 minutes), there is no monster ant in sight; just the wrecked aftermath of the insect attacks, and that ubiquitous desert. We see a trailer in the arid no-man's land, peeled open like a tin can. Then Gramps' general store, similarly ripped asunder.

And finally, before we see even one of the giant critters come nosing up over a plateau, we hear something: that horrifying, signature whistle...a screech once heard it's never forgotten.

These first thirty minutes of the film prove crucial in erecting a mood of tension, suspense, and terror, and indeed, this is precisely the kind of atmosphere missing from many a horror flick these days. These thirty minutes grant Them! a sense of place and texture; a necessary pre-condition to being scared.  The audience must know the know the terrain before it knows to be scared by the secrets lurking there.

After the first confrontation with the ants, the film leaps into action-mode with the effective government response (unlike real life, probably...) wherein a mission is launched to destroy the somewhat-larger-than-ordinary ant-hill.

This is the point in Them! when one of my favorite - and one of the grisliest - images occurs. There's a macabre shot of one of the colossal ants standing astride the opening of the nest, a human rib-cage clutched in its over-sized pincers. The ant tosses down the bones, and the camera pans down the ant hill to a substantial collection of human skeletal remains, including a skull, and the holster of Peterson's missing partner.  This moment signifies the beginning of a new order, an order in which humans are literally tossed down to the bottom of the food chain.

You'd think that a movie made almost sixty years ago would seem positively antique today, but Them! holds up remarkably well, even in the special effects department. The giant ants look surprisingly mobile and realistic. I think this is so because Douglas and the special effects men wisely keep the ants in motion at all times. They rise from their ant-hills, nose into frames, bear down on prey, and so forth, and so we never get the chance to observe them at rest and detect their phoniness in the actual film (although stills are a different story...).

The editor did a remarkable job integrating these shots, and some sequences remain staggeringly impressive. For instance, I love the multi-layered shot of a ship's communications room, where we can see ants attacking behind an opaque, wall-sized window.

In the midst of the shot, our attention is diverted.  The ants crack the glass, breaking in, and then, suddenly, another ant lunges into the shot from the left and rapidly crushes the radio man. By keeping these monsters (these special effects...) kinetic, and by seeing the frame as three-dimensional, the artists behind this film have kept their threat lively and viable, even a half-century later. 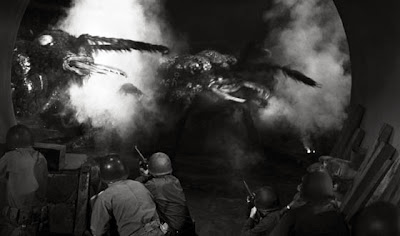 And I challenge anybody to watch the finale of this film (set in the Los Angeles sewers) without getting at least a little uncomfortable. Robert Graham (Arness) has found the ant stronghold there, but the ceiling has caved in behind him, leaving him with just one machine gun as a line of defense against the ants, who are gathering at the lip of the nest before him. The ants jut into the frame with their razor-sharp pincers, attempting to grasp him...and his gun jams. He dodges, but another ant attacks from the opposite side.

Again, the sense of the ants in constant motion and the vulnerability of our hero make this moment remarkably suspenseful

Perhaps this scene works so well because Them! has so assiduously constructed the terror of the ants, right down to, essentially, an informative background video on them. At one point, the film's action veritably stops to give us a long, five-minute documentary-style premise on the nature of ants, using real nature footage. Watching real ants scrap and scrape, wage war, and move heavy obstacles (like rocks...) from their path, the viewer is....disarmed. A little suspension of disbelief, and suddenly the thought of gigantic ants really is terrifying. These little guys wage strategic campaigns, take slave labor, and protect their own, and it's clear that we ignore them because of their minuscule nature.

Well, just imagine that they were indeed, nine feet tall.  Their strengths -- their organization, their loyalty, their coordination -- would dwarf mankind's.

In some ways, Them! also seems to forecast modern hits like Aliens (with a cleaning out of the enemy nest, and a military response to an insectoid threat...).  It's one of those "the soldiers-go-in-to-destroy-monsters" movies, and still one of the best, at that.
at October 28, 2013