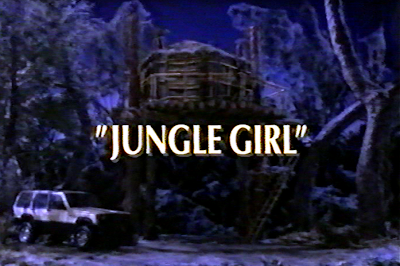 This week’s episode of the Sid and Marty Krofft Land of the Lost remake (1991 – 1992), “Jungle Girl” is a vast improvement over last week’s installment “Shung the Terrible.”  In this story, an alignment of the Land of the Lost’s three moons causes all the denizens -- including Stink and Tasha -- to head lemming-like in a stampede towards “The Valley of Death.”  There, they will fall over a high mountain precipice to their deaths, in the vast boneyard below.

The Porters and Christa race to save their friends from this terrible fate, even as Mr. Porter seeks to learn more about Christa’s past, and her early life in San Francisco.  Christa dismisses her memories of Earth as “just dreams,” but Mr. Porter suspects she came to the Land of the Lost the same way his family did… 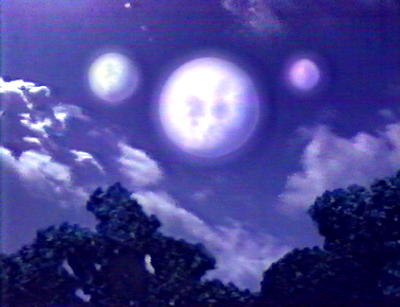 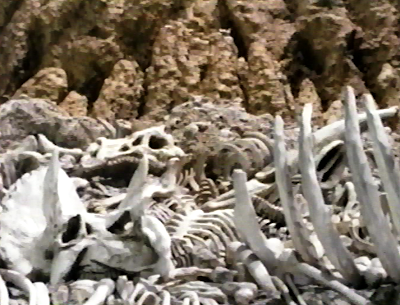 “Jungle Girl” feels authentically like a throwback to the Original Series in many ways.  In particular, there were many episodes of the 1970s Land of the Lost in which some environmental mechanism of the Land of the Lost broke down and caused the creatures living there to react erratically.  Sometimes it was an eclipse, sometimes a sun that wouldn’t go down at night and sometimes the Skylons, devices which warned of weather variations.

Here, the alignment of the three moons jeopardizes Tasha and Stink, and the Porters and Christa react out of love to save them.  In other words, the Porters care for the members of their “extended family,” much as in the original series, Rick, Holly and Will came to care for Dopey in episodes such as “Tar Pit,” or for Chaka.  The difference here, in terms of Tasha, is that she has moved in with the Porters, something that didn’t happen with Chaka until the third season of the original Land of the Lost.  In other words, the Porters are a “blended” family more quickly, and this reflects the change in family units in America in the nineties. 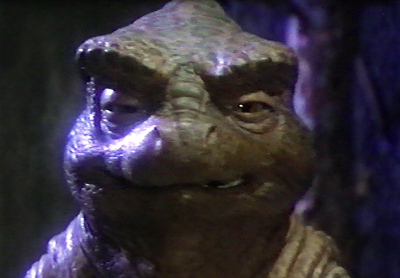 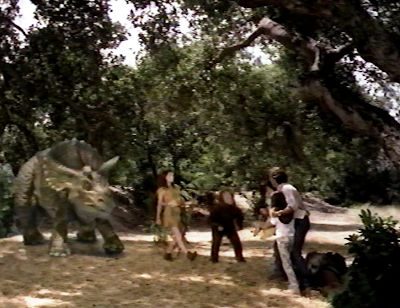 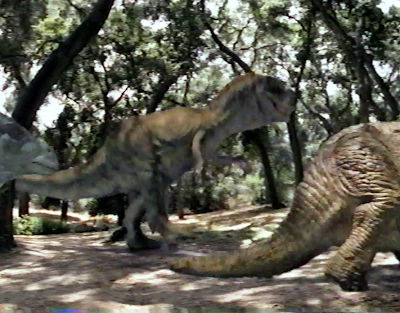 In terms of the specific threat in “Jungle Girl,” Mr. Porter theorizes that perhaps the alignment of the moons is “warping the light rays” in the sky and causing the valley-wide trance.  Perhaps, he suggests, the dinosaurs emerged from an ancient ocean that once existed at the bottom of the mountain (in the   Valley of Death), and somehow the light programs them to return there, to that same spot. The only thing that’s hard-to-swallow about this is idea that both Pakuni (mammals) and dinosaurs (reptiles) are impacted in the exact same way by the alignment.  On the other hand, this trance might impact all denizens of the Land of the Lost, since only Earthlings -- the Porters and Christa -- are immune.

In terms of the episode’s resolution, the Porters use their car again, and break the eclipse spell by honking the horn and stopping the stampede.  This is a believable solution, but this makes “Jungle Girl” yet another story (the third out of four, I believe…) in which the Porters’ car is utilized to save the day. That makes it officially a writer’s crutch at this point.  And it’s so bad a dramatic resolution because at some point the car’s gas has to run out…and the vehicle isn’t going to be an option.  Either that, or the writers are going to ignore that eventuality totally, and the series then has a problem with continuity and logic to contend with. 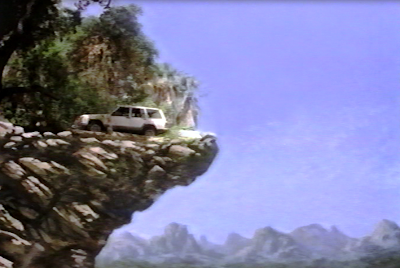 Still, I liked this episode more than last week’s because it brings everybody together, gives us some more background on Christa (we know she has Polaroids of her family, and her pet dog, Princess…), and doesn’t rely on one-dimensional villains like Shung and his sleestak stooges.