In “Safe,” the fifth episode of Joss Whedon’s Firefly (2002), Serenity delivers its payload of livestock (picked up on Persephone in the previous story “Shindig) to dealers on the colony of Jiangyin.
The transaction is interrupted by the police, however, and Shepherd Book (Ron Glass) is accidentally shot in the resulting melee.
Mal (Nathan Fillion) is forced to leave the planet and seek Alliance help to save the Shepherd’s life, while Simon (Sean Maher) and River (Summer Glau) Tam are inadvertently left behind, and captured by the denizens of a backwater town in the hills.
Those denizens desperately need a town doctor to tend to their sick, but the parochial hill people also suspect that River is a witch. and decide that she must be burned at the stake  along with her brother… 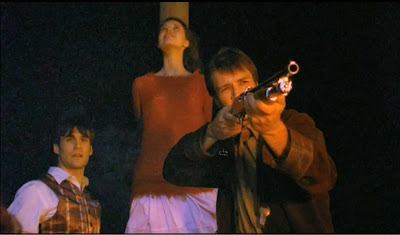 Your mileage may vary, of course, but “Safe” is -- for my money -- the least interesting and least notable Firefly episode in the canon thus far.  It repeats a central threat from the pilot episode -- that of a crew-member getting shot during a confrontation -- and even reruns the notion of a “business transaction” that turns violent, or otherwise goes astray.

Similarly, the flashback sequences in “Safe” involving young River and Simon (Zac Efron) don’t really cover any new ground, or provide information that audiences don’t already know, or can’t intuit.  In previous stories, Simon has already explained rather thoroughly how we grew worried for River while she was away at school, and how he endeavored to break her out of the Alliance’s grip.  Seeing some of that history played out here doesn’t really add anything new to the mix, save for the depiction of Mr. Tam, the siblings’ father 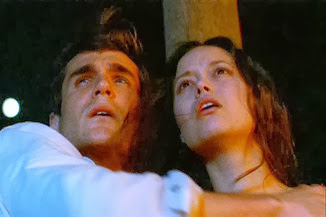 Likewise, the episode’s final point -- that Mal is loyal to his crew -- is pretty much a foregone conclusion from the beginning, and so doesn’t spark any strong feelings or emotions, or even register as very memorable.  “Safe” isn’t just the episode’s title, then, it’s a description of the episode itself, which plays like a placeholder between extremely dynamic installments, namely “Shindig” and “Our Mrs. Reynolds,” up next.
Getting to specifics, in “Serenity” it was Kaylee (Jewel Staite) who was shot, nearly died, and required medical attention, and here it’s Shepherd Book.  The point with both injuries is the same: life is dangerous on the periphery of the law (and on the frontier), and doubly so without easy access to state-of-the-art medical facilities.  But the point doesn’t have to be made twice in four episodes, for certain.

The most compelling aspect of “Safe,” is by far the continuing bread crumb trail regarding Shepherd Book’s past.  Here, it is discovered that his “Ident Card” establishes him as a man of some importance in the Alliance (a former Operative, perhaps?).  When the Alliance Goons read his card, they treat Book like a V.I.P. and really hop to it.  This is a notion that the series didn’t get to fully explore before cancellation came, but which is nonetheless compelling.  Who was Book before he became a Man of God?  What bad deeds did he commit that turned him towards a life of prayer and reflection?

Regarding Simon and River, I feel it is very hard to get both of their characters exactly “right,” and that this episode ever so slightly misses the mark. For instance, River possesses that special TV brand of insanity -- which Walter Bishop also suffers from on Fringe -- namely that she is sane, lucid and wise when the story requires her to be, and nutty, dangerous and confused when the story requires that aspect of her personality to come to the forefront.  I call it selective insanity, and it tends to magnify whenever there is some threat that could be easily avoided save from the wrong word or action by River.

As for Simon, we learn in this episode that he gave up his entire future as a physician to help his sister, and that’s admirable indeed.  However, Simon still comes across in the present day scenes as entitled, abrasive and selfish.  “Who cares about my future?” He asks, for instance, obsessing on his own problems.  We know he is struggling with his decision to save River and give up his career, but he isn’t especially sympathetic or likable in this installment.

I’m not saying that “Safe” is a bad episode, mind you, only that not much really happens in the story that seems fresh or new, and that, therefore, the episode isn’t one of my favorites.

In particular, I don’t think that the writer, Drew Greenberg, is particularly strong in making the shift from the hill people as backwards, doctor-needing-rubes to Fire-and-Brimstone Villagers and religious fanatics.  It seems a little too pat, and a little too manufactured a threat.  On the other hand, the scene with River breaking loose and dancing -- care-free -- with the locals, is quite beautiful, and poetically-rendered. 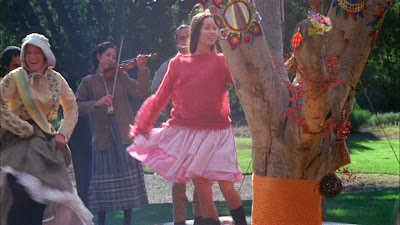 Next week, a humdinger of an episode gets us back to the spiky surprising Firefly that we all love: “Our Mrs Reynolds.”
at October 27, 2013