Ask JKM a Question: The Conjuring 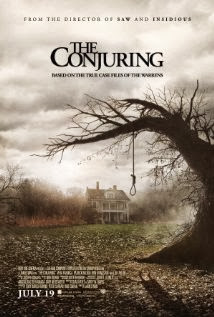 "Any chance of you reviewing James Wan's The Conjuring any time soon? For me it's one of the most effective horror movies of the last few years. Yes, some of the scares were straight out of the 'haunted house' playbook, but rarely if ever have they been so well done.

Also, what do you think of Wan turning this into a series about the Warrens, Formiga/Wilson reprising their roles in a sequel which hopefully will explore another real-life investigation (hopefully Smurl/Snedeker/Amityville)?"

Jez, I will be reviewing The Conjuring this Thursday afternoon to celebrate Halloween (along with a review of The Invoking)!

I finally saw The Conjuring last weekend, and I while I had some issues with the narrative's coherence (as I'll explain in the review), I can't quibble about how effective many of the scares turned out to be.

In a sense, that was the exact same argument I made about another film from the same director: Insidious. It often seems to work in-spite of itself.

I am torn, I must admit, about the notion of a series of horror films about the Warrens, because I feel the subject matter would work better as a TV series.

A TV series could allow more depth, and would be relieved, essentially, of the horror film's obligation to play with structure.

I worry that a series of movies about the Warrens won't, ultimately, prove that scary, because we are guaranteed their survival.

The same would be true of a TV series, I guess, but there's a different set of expectations there.  We know we are going to follow the same characters, week-to-week, and thus suspend disbelief about their survival or the episode's sense of surprise.  Horror usually fails to be scary, if it becomes too familiar.

That established, this isn't a dig against Wilson or Formiga.  Both of them did an excellent job in the film.  I felt their performances were top-notch.