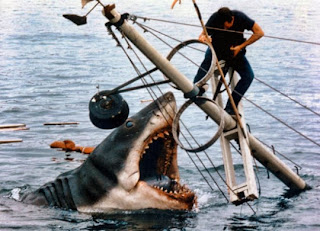 Reader Duanne Walton gives us our last list of the day.


Anyway, here we go...
10. The Blair Witch Project. I was sort of ambivalent about this movie at first, since I didn't find it scary at all. But I've developed an appreciation for it due to the details they put into the backstory (told through the website) and the filmakers' intentions.
9. Disturbing Behavior. Another movie where I appreciate the filmaker's intentions. Too bad the studio executives didn't. If any movie deserves a director's cut, it's this one.
8. The Abominable Dr. Phibes. A classic black comedy with a classic horror anti-hero, as only Vincent Price could play him.
7. Carrie. Another classic horror anti-hero, courtesy of Sissy Spacek. The best monsters are the ones you root for in some way.
6. Psycho. And here we have another classic horror anti-hero, one of the best: the ultimate mama's boy, Norman Bates.
5. Rosemary's Baby. Some things are scarier when you don't see them and your mind fills in the blanks. This movie does that very well. The Lord moves in mysterious ways, and sometimes Satan does too.
4. Bram Stoker's Dracula. Bela will always be the definitive Dracula. But this movie may very well be the definitive version of Dracula.
3. An American Werewolf in London. This one was the game changer for me. My first modern horror movie. Having been raised on a steady diet of Universal classics up to that point, I was completely unprepared for what this movie had in store for me. Those two guys sitting behind me in the theater definitely got their money's worth.
2. The Baby. The first time I tried watching this, I shut it off after the first eighteen minutes and wouldn't touch it for two weeks. This is one of those movies that crawls under your skin and stays there!
1. Jaws. The shark is pretty much the only movie monster that actually scares me.
Well, there you have it. And I have to say it felt odd having to leave out the movies of the thirties, forties, and fifties. I'm guessing that's because 1960-2000 is more your time period?

Also, I have a real love of horror films from the 1930s and 1940s such as Frankenstein, Dracula and The Wolf Man, and it seemed odd to lump them into a direct competition with films like The Exorcist and Halloween. It just didn't feel right to me.  So that's why I erected some barriers so far as dates are concerned.  I can understand why it may seem arbitrary, but hopefully those reasons make some degree of sense.

I'm also glad you felt empowered to create the list you wanted to see: that's what this exercise is all about. There should be no pressure to conform to anyone else's notion of the best films.  We all want to know what you think, and that's what you gave us.  Part of this list-making on the blog is, for me, absolutely selfish, because I get introduced to films I haven't seen, or re-introduced to ones I need to see again.   So, please, don't be shy!!!

In terms of your list, I am most thrilled by the presence of Blair Witch -- everyone here knows I'm a huge advocate for that film -- but also The Abominable Dr. Phibes.  I love both Phibes film, and wish there had been a third.  I think if there had been, Phibes would be right up there today with Freddy, Jason and Michael as "Big" modern monsters.