From Great Britain -- the home of Dr. Who, UFO, Blake's 7, Space:1999, The Prisoner and Sapphire and Steel -- came this 1970s TV serial about homo superior, a new brand of "evolved" human beings.

The CW has remade the series, and the new show will be airing beginning this coming Wednesday, October 9.  Today, a look back at the disco-decade original.

In the first five-part serial of The Tomorrow People (1973 - 1979), penned by series creator Roger Price and Brian Finch and directed by Paul Bernard, we join the first three tomorrow people in the middle of a rescue mission, in media res.

In particular, Tomorrow People leader John (Nicholas Young) -- a serious, fast-talker -- and his companions, Carol (Sammie Winmill) and Kenny (Stephen Salmon), have set out with the help of their friendly computer, Tim (a more kindly version of HAL) to bring a young boy named Stephen (Peter Vaughan-Clarke) into the fold.

Stephen is in the delicate process of "breaking out" (an experience analogous to puberty in humans), wherein his mental skills as a "tomorrow person" are coming to the forefront of his psyche. Among these powers are the three "T's" of the tomorrow people: telepathy, teleportation and telekinesis. When Carol visits Stephen in the hospital following a "brainstorm," she informs Stephen of his destiny as an evolved human being, a tomorrow person.


Because they share a mental link, "tomorrow people are never alone." Also, tomorrow people are totally incapable of killing. They can defend themselves, but they cannot commit murder under any circumstances. Fortunately, their advanced minds as well as their technology help them complete their tasks (locating and educating more tomorrow people, and communing with alien races...), and we see examples in this first serial of their tools of the trade.

For instance, The Tomorrow People carry nifty stun guns (which don't kill), and also wear belts that help them "jaunt" back and forth from one location to another through hyperspace. Jaunting, in case you were wondering, is "the instant transmission of bodies from one point in space to another" (like beaming up). The tomorrow people operate from a central headquarters in an abandoned underground station (where a geological fault was detected...), and the base is equipped with view screens, computers, a jaunt pad and more. 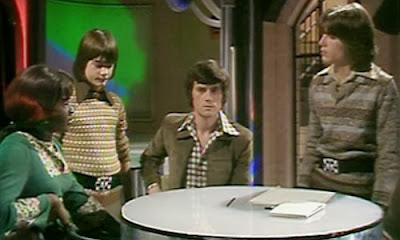 Tim (Philip Gilbert) is the best technology of all. "I'm a biological computer," he informs Stephen. "I don't have disks and tapes." The high-tech "machine" is fully capable of original thought, and he also cooks...materializing food instantaneously (sort of like a replicator in latter day Treks). In this first serial, we see Tim make some executive decisions when the young tomorrow people can't. In an especially dangerous situation, he overrides the jaunt pad so that all the tomorrow people can't be put into danger at once.

The Tomorrow People also reveal to Stephen in this episode that Earth is a "closed world;" that aliens are not supposed to visit the planet, though they occasionally do so. And that fact leads into the central intrigue of "The Slave of Jedikiah:" a mysterious bearded man also wants to get his hands on Stephen for some mysterious purpose, and abducts the boy to rural Bentham Hall with the help of a comic (and annoying..) motorcycle gang. The Jedikiah squelches Stephen's telepathic ability with a "silencer band," which soaks up mental transmissions.

The Tomorrow People set out to rescue Stephen and solve the mystery of the Jedikiah (who calls the Tomorrow People "younglings"). They soon discover that there is some truth Homer's Odyssey, particularly in the character of Polyphemus. Seems that Jedikiah is the (robotic, shape-shifting servant of a green alien cyclops aboard a damaged spaceship in Earth orbit. The Cyclops requires the help of telepaths to help him get his ship into hyperspace, because his own telepathic slaves died in an accident. While evading Jedikiah (rendered out-of-control by a stun-gun shot to the head), the Tomorrow People attempt to send the alien Cyclops back to his planet. In the process, they learn that, according to the alien, "Earth has a bad reputation."

"You are always at war," he tells them, and every time an ambassador is sent from other worlds, "he's slain."

"The Slaves of the Jedikiah" ends with Stephen on track to join the Tomorrow People in future assignments, and a friendship forged with the comic motorcycle dudes. 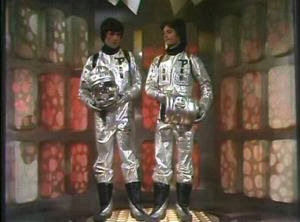 "The Slaves of Jedikiah," The Tomorrow People's introductory serial, is one that grows less and less interesting the longer it lasts. The first portions of the narrative (thru Part III or thereabouts) serve as splendid set-up of Price's interesting and unique universe, but by episodes four and five, we're deep in "runaround" territory (a failing also of early Doctor Who), with Kenny getting kidnapped and rescued, and the robotic Jedikiah roaming endlessly through spaceship corridors. The good will and curiosity forged by the serial's fine beginning is pretty much squandered by the end. You watch episode 5 and you're ready to move onto the next serial already. You like the characters; you like the settings...you just want a better story.

What works so beautifully about The Tomorrow People (termed a children's show at the time) is the central premise (one shared, in various ways by modern franchises such as Heroes, Prey and Mutant X). It's the notion that mankind is evolving into something better, and that people with special abilities walk among us. Because this series was created in 1973, the next step of human evolution depicted here - homo superior - is idealistic, anti-war (this was the age of the Vietnam conflict after all) and intensely pacifist. The Tomorrow People boast the idealism of the Hippie Movement, but the characters have the technology, science and power behind them to exploit their skills in clever, useful and entertaining ways.

Even the central threat in "The Slaves of Jedikiah" arises not from deliberate alien malevolence, but rather from misunderstanding and fear. Carol asks Ranesh (the Cylops) why he didn't just ask for help, rather than trying to force the Tomorrow People to come to his aid, and his answer concerns human nature and human history. Yeah, it's a "message," but it isn't preachy. It's in the fine tradition of The Day The Earth Stood Still or Star Trek.

I also love the idea so prominently placed here that any child in the world can "break out;" can become a tomorrow person. That's an enormously appealing idea; the notion that one day you can make an impact; change your world for the better. And there are no exclusions on your abilities based on Earthly prejudices like sex, race or (presumably) orientation. It's an immensely positive idea to impart to kids (and grown-ups too, perhaps). 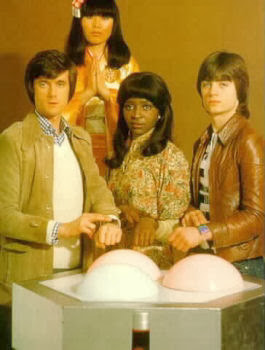 If you've watched 1970s British science fiction television before, you know that (excepting UFO and Space:1999) there are often limitations in terms of budget, and therefore in terms of visualizations or production values. The same is true here. The robot Jedikiah turns into is very, very lame (a sort of cardboard box creation). There's a lot of what appears to be chroma key work ...some of it good (the jaunting), some of it not so good (the hyperspace sequence). The "futuristic" space helmets appear to be football helmets, down to wire mesh over the eye slits. Still, I enjoy the look of the Underground HQ (a great set...), and I appreciated the retro-style jaunt control belts.

For a so-called "children's show," The Tomorrow People does absolutely zero talking down to the audience, which is also a really fine quality of British si-fi.  This serial, "The Slaves of The Jedikiah" explains in rapid-fire succession such adult genre concepts as hyperspace, teleportation, shape-shifting, biological computers, telepathy, and even Darwinism. The imagination of the ideas far outstrips the special effects and that's a trade I'm happy to make.

I will be interested to see how American television of 2013 re-parses The Tomorrow People.  I'm expecting angsty, doom-n'-gloom adolescent super-models, and a more Earth-based story-line. But I'm also keeping my expectations in check, and seeing what the new program has to offer as a variation-on-a-theme. I hope the show is good, and a smashing success...
at October 06, 2013