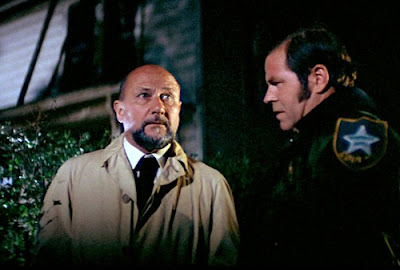 Reader and friend Kody Zimmermann starts us off with the Reader Top Ten -- Greatest Horror Films circa 1960 - 2000 -- this fine Thursday afternoon.

“Not an easy list to put together.  Almost feels like I'm snubbing a family member when I chose some over others.  But here you go:

7. The Fly (1986) (I almost swapped this out for The Thing, both touching on the loss of humanity, but in the end, as great as The Thing is, Cronenberg makes me cry every time I watch I watch Brundle's dive in the abyss.  My wife is always there to taunt me.)

I have a feeling a lot of these titles will repeat… many horror films are made, a handful make it to myth status…”

Kody: I love your list, and it is great to see The Changeling, directed by Peter Medak, make the list.  That is one of the most terrifying haunted house movies ever made, and one thing that makes it so unusual is that The Changeling arrived right in the midst of the slasher film cycle.  It was out-of-step with its brethren, and yet brilliantly-crafted.

I believe this is also the first appearance on a reader list of Candyman, which I count as one of the ten best horror films of the 1990s, without question.
at October 24, 2013