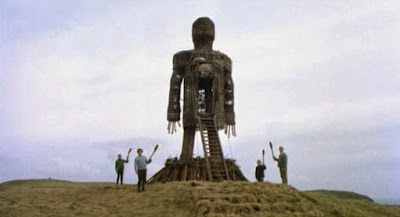 "Hoo-boy, John, this was a tough one. Even with the 1960-2000 constraint, as I started compiling my Top Ten, I felt like I was going to have to include about a thousand Honourable Mentions ... I had to draw some boundaries!

I remember reading an essay by John Skipp and Craig Spector that argued that every movie could be viewed as a horror movie, or, as they put it, "Horror is the engine that powers every movie you ever loved". They use Amadeus as their "Exhibit A", but I'd also offer such diverse movies as Goodfellas, Blue Velvet, Time Bandits, and heck, even Disney's Snow White as examples of "non-horror" movies that are pretty darn horrifying. (And isn't Assault on Precinct 13 one of the greatest all-time zombie movies, without zombies?)

So I decided to concentrate on supernatural horror, which meant reluctantly dropping such titles as Silence of the Lambs, Jaws, Misery, and even the original Halloween. (See how I'm sneaking in my thousand Honourable Mentions?) I also decided to shy away from two of my favourite sub-genres: sci-fi horror (sorry, Thing and Fly and most of David Cronenberg's early work) and horror-comedy (bye-bye, Fright Night and Spider Baby).

So for my Top Ten Arbitrarily Constrained Supernatural Horror Movies Circa 1960-2000, the first two entries are:

1. The Wicker Man (1973) ... Aaaand right off the bat I'm bending my own rules! Okay, there might not be anything explicitly supernatural going on here, but the residents of Summerisle sure think there is (and who knows, they might be right). I consider this a nearly perfect film, with every piece of the puzzle sliding into place at just the right moment. It also may be Christopher Lee's finest performance, and the ending is truly devastating.

2. Vampire Circus (1972) Kind of cheating again. Although this quirky entry is one of my personal favourites, I'm really using it as a stand-in for the whole cycle of Hammer horrror films from the late 50's to the mid-70's. I've often felt that during that period, what Hammer was doing for horror was a lot like what the Beatles were doing for rock'n'roll. (And how brilliant was it to focus their Frankenstein series on the Doctor, rather than the monster?)

The remaining eight, in chronological order:

- Captain Kronos, Vampire Hunter (1974) Another Hammer, but very different in tone from most of their other output. Too bad the planned franchise never came to be.

- The Evil Dead (1981) I've never really been a big fan of cabin-in-the-woods movies (notable exception: The Cabin in the Woods) but Sam Raimi really broke the mold in terms of imagination and sheer terror. The sequels were pretty decent, too, even as they spun off in different directions. I haven't felt the need to check out the remake.

- The Howling (1981) Made the Big Bad Wolf scary again. Barely edges out American Werewolf in London if only because I find the end of that movie such a mess.

- Angel Heart (1987) Kind of the voodoo version of The Wicker Man. Beautifully shot, wonderfully spooky, and with a sly sense of humour. Worth watching a second time to catch all the clues you missed.

- Near Dark (1987) A unique take on the vampire story, in may ways the antithesis of the Hammer flicks, with dust substituting for fog. Kathryn Bigelow's star has been rising lately, but some of us knew way back then that she was one to look out for.

- Naked Lunch (1991) Maybe more surreal than supernatural, but I had to get Cronenberg on the list somehow.

- Candyman (1992) Possibly the best Clive Barker adaptation (though Hellraiser and Nightbreed have their moments).

- Cronos (1993) Yet another twisted vampire story, this time filtered through the unmistakable vision of Guillermo del Toro.

Well, thanks once again, John, for the chance to spout off and pontificate about some of my favourite flicks. And more importantly, the chance to read the other lists and maybe find a few new favourites."

Ampersand: There are some fantastic titles on that list, and your number one choice, The Wicker Man, is having quite a showing in the final tally.  I also appreciated seeing Angel Heart (1987) and Cronos (1993) on the list.    Your selection of Naked Lunch makes me want to go back and see that film again.  I haven't seen it in probably fifteen years, and probably never gave its due...