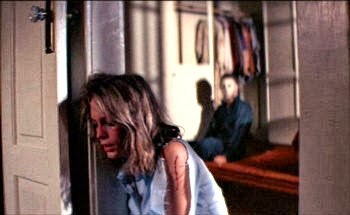 “I've been following your blog for a couple of years but I never quite got around to e-mailing you before or even left a comment on your site. However, these Reader Top 10 lists seem like a nice icebreaker and since horror is probably my favorite movie genre I couldn't really pass this up!
I feel like I should also apologize for any mistakes I might possibly be making in my writing since English is not my mother tongue, but hopefully those are not too numerous. I guess I should also mention that I'm writing to you from Croatia (in Europe, just across the Adriatic Sea from Italy), which is probably a place that you aren't getting too many e-mails from!

Having said all that, here are my picks:

I feel like I should perhaps point out that some of my more peculiar choices (Psycho II and The Exorcist III) are there because those are the sequels that I tend to re-watch far more frequently than the originals so I wouldn't feel right sidestepping them in favor of the original films, as excellent as those are. If this was a Top 20 list then there's no doubt that those movies would have been included as well.

In the end, I'd really like to thank you for all the wonderful work you've been doing on your blog, especially when it comes to giving a more fair and balanced assessment of much maligned movies such as John Carter, After Earth and many others.”

Ratko: I want to thank you for your affirmative words about my work, and say it is a pleasure to meet you, and to read your top-ten selections.  I didn’t see any errors in your English, so don’t give that a second thought.

We share our #1 choice -- Halloween (1978) -- but I also find your other choices to be very strong.  Black Christmas (1974) is often pointed to as one of the pre-Halloween originators of the slasher format, and a deeply creepy film.  Suspiria (1977) is also my favorite Argento film, and an authentically terrifying movie.

Also, I am a huge fan of Richard Franklin.  He’s a truly underrated talent, and has given the genre films such as Patrick (1978), Road Games (1981), Psycho II (1983), and Link (1986). He is a legitimate heir to Hitchcock in terms of both style and mastery, and I’m thinking it’s time to do a retrospective of his work here on the blog, so thank you -- through your selection of a Psycho sequel -- of reminding me of a movie-maker I really admire.
at October 25, 2013