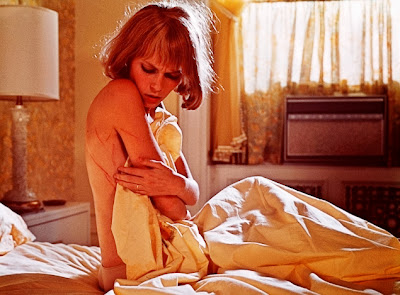 Reader, horror enthusiast and friend, Jeremy Meyer contributes our second list of the day, vis-a-vis the greatest horror films of the period 1960 - 2000.

"Another great question, but one that was almost impossible to answer satisfactorily. I've had to settle for a very personal set of choices and I'm not convinced at all about my ordering - it's changed maybe five or six times over the last 24 hours.

10. Phantasm (1979) [Coscarelli] - Widely regarded as one of the seminal indie horror titles, Coscarelli and his game group of friends proved that a surplus of ideas can more than make up for a shortage of cash. Phantasm is a luridly imaginative and visually powerful metaphor for how children learn to cope with death and accept their own mortality. The closing scene cements this, and unlike similar scenes in other titles (A Nightmare On Elm Street for instance) it is the key to the narrative rather than a cheap scare.

9. The Iron Rose (1973) [Rollin] - The name Jean Rollin normally brings to mind lesbians, vampires and twins, but his best work for me is the simple story of two lovers trapped in a cemetery for the night, 1973's La Rose De Fer. The narrative or lack thereof is largely unimportant; this is a gorgeous visual meditation on the entwined nature of death and love. The inseparability of Thanatos and Eros is the sort of idea you'd expect to be explored by an auteur like Bergman, but Rollin's hugely underrated lyrical gem proves that he had depths people seem to forget.

8. Carrie (1976) [De Palma] - Sissy Spacek in Carrie is surely one of the most inspired casting choices of all time. Spacek has such a strange, ethereal type of beauty that there was somehow no explanation necessary for her outsider status; her looks set her apart from her peers but were alluring enough to utterly engage the viewer. Aside from Spacek, the real star here is the magnificent cinematography and direction - the opening and closing scenes are the stuff of legend.

7. The Shining (1980) [Kubrick] - Like Carrie, The Shining is carried by a sterling performance and outstanding cinematography. Jack Nicholson gives a stylized but unnerving turn as troubled writer Jack Torrance that ranks for me as the second best descent into madness portrayed on screen.

6. The Last House On The Left (1972) [Craven] - One of the most powerful anti-violence movies ever produced. Sure, the direction is occasionally ropey (this was Wes' first feature after all) but they key to its success is how the final third is handled. The frank brutality of the gang's crimes has the audience baying for their blood, but the cold, antiseptic portrayal of the Collingwoods' revenge leaves only a hollow feeling once it's over. Violence dehumanizes everyone, no matter how 'good' or 'just' our intentions.

5. The Wicker Man (1974) [Hardy] - The genius of The Wicker Man is how it manipulates the sympathies of its audience. From the outset Sgt. Howie is stuffy and humorless, whereas the inhabitants of Summerisle are fun loving and free-spirited. Before long however the sinister nature of islanders becomes apparent; the menacing undertone of their bawdy songs and pagan rituals is brought to the fore while the previously unlikable Howie is thrust into the role of righteous martyr. Christopher Lee as Lord Summerisle and Ed Woodward as Sgt. Howie are marvelous, and the music will stay with you for years.

4. Henry: Portrait Of A Serial Killer (1986) [McNaughton] - A film so controversial it languished unrated and unreleased for three years, Henry is one of the very few true horror movies. It coldly oscillates between showing the banalities of Henry's life and the unimaginably brutal crimes he commits to alleviate that boredom. What elevates Henry to the status of a great movie, albeit one that is difficult to watch, is its overt criticism of horror voyeurism. Those lengthy tracking shots circling discarded corpses, that infamous and stunning scene with the suburban family... we are Henry and Otis, re-winding for our own sick pleasure.

3. Repulsion (1965) [Polanski] - Polanski's first foray into English language cinema is one of his best. Repulsion is the most committed and disquieting portrayal of madness on film. Polanski's beautiful, twisted visuals combine with Catherine Deneuve's chillingly catatonic performance to create an inimitable and devastating picture.

2. The Thing (1982) [Carpenter] - The Thing has it all: incredible non-digital effects (courtesy of Rob Bottin and Stan Winston), beautiful location work and cinematography, a fantastic and nihilistic ending, and some brilliant character work from the talented cast. The tension is palpable throughout, and Carpenter expertly juxtaposes feelings of claustrophobia and isolation to create one of the most atmospheric movies ever made.

1. Rosemary's Baby (1968) [Polanski] - One of those rare moments when the stars align and a near-perfect movie is possible. Given Polanski's nature and his previous explorations of female sexuality and the male gaze (see Repulsion), this was the perfect story for him to tell. Couple that with one of history's great performances from Mia Farrow, a wonderfully creepy and overbearing ensemble cast, and a haunting score, and you have one of the finest horror movies in history. Polanski's direction is deliberate and methodical, building tension until it froths into paranoia and then pure terror.

Jeremy: A fantastic list, and two things stick out.  First, your admiration for Polanski's genre work (which I share).  I also think his The Ninth Gate (1999) is extraordinary.  The second thing is that you included Phantasm, a film that I also included on my list, but which hasn't had a great showing here with readers.