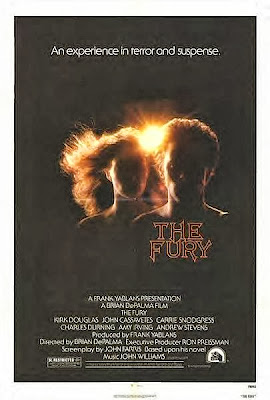 "I don't recall seeing this review back when you were covering De Palma movies a while ago.

Wondering what your thoughts were on this one, which is just now getting the deluxe blu-ray treatment from Arrow in the UK. It's a fav of mine, though a tricky one to defend, given the obvious plot and script problems.

But to me it's one of the most visually compelling horror movies ever made, and every time I watch it, I'm fascinated by how De Palma orchestrates each horror set piece slightly differently from the one before it. Some hit you from out of nowhere, others slowly build to a crescendo; each is unique in terms of lighting and staging and mood. Approached as a silent movie, I think it's a classic--though it needs to be watched with that amazing John Williams score."

Steve, I reviewed The Fury in Horror Films of the 1970s (2002) way back when I wrote the book in 1999, so it's prime time for a re-visit.  I agree with your description of the film's set pieces, which remain awe-inspiring.  The slow-motion escape from the Paradox Institute (featuring Amy Irving) is one of the most brilliantly-orchestrated and edited montages in 1970s film.  Also, the film's explosive ending is one of the most unforgettable in horror history.

And, of course, as you probably remember, Brian De Palma is my all-time favorite director.  Tomorrow, I review his latest, Passion (2013), and then on this Friday, I'll review The Fury (1978).

It's shaping up to be a great week...