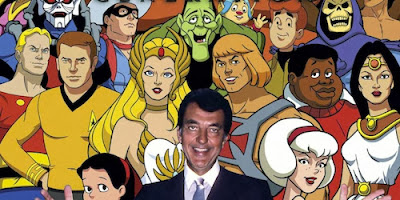 The press is now reporting the passing of Lou Scheimer, co-founder of Filmation Studios with Norm Prescott.

I had the pleasure of interviewing Mr. Scheimer over a decade ago while researching a Cinescape article about Star Trek: The Animated Series.  He had a great sense of humor about his career, and spoke with tremendous passion and energy regarding his life's work.

Beyond his personal exuberance and kindness, many of Mr. Scheimer's TV programs proved a foundation and crucial part of my youth.  Today, my DVD collection is filled with Filmation productions of the 1960s and 1970s, and I've blogged many of those enterprises here.   These shows are unforgettable.

Mr. Scheimer was also responsible for bringing Aquaman, Superman, The Lone Ranger, Batman, Tarzan and other superheroes to animation from the 1960s through the early 1980s.

The production values on these programs (particularly Space Academy and Jason of Star Command) were astonishing for Saturday morning TV in the 1970s, and Mr. Scheimer always made sure that kids got their money's worth.

I can't begin to calculate how many hours of my life I have spent watching and enjoying Filmation genre programs, but I know the total is...a lot.   Mr. Scheimer will be much missed, but his legacy is beyond remarkable: a generation that knows, loves, remembers and cherishes his work...
at October 20, 2013