In “Bushwhacked,” the third episode of Firefly (2002), Serenity’s proximity alert warning sounds as the ship unexpectedly nears a derelict space-craft.  Mal (Nathan Fillion) and others board the ship for purposes of salvage, and discover the entire crew dead, save for one survivor (Brandon Morgan).  As Mal realizes, the crew has been murdered by the brutal Reavers.

As Serenity’s crew grows concerned about the survivor’s health and mental well-being, an Alliance Cruiser approaches with plans to arrest Serenity’s personnel and impound the Firefly class ship.  While the rest of the crew is in held in Alliance custody, River (Summer Glau) and Simon (Sean Maher) don space-suits and hide on Serenity’s hull so they won’t be discovered.

Meanwhile, the derelict’s lone survivor succumbs to the very madness that embodies the Reavers and attacks the green-horn Alliance captain, Harken (Doug Savant), at least until Mal intervenes.

In “Bushwhacked,” the crew of Serenity -- our frontiersen, to adopt the series’ Old West metaphor --comes across the aftermath of a brutal Indian raiding party.

Only in this case, of course, that space-age raiding party consists of the deadly Reavers, who are again defined by Firefly as incomprehensible “others,” blood-thirsty savages about whom very little is concretely known.  The episode also suggests that more Reavers are “born” by being exposed to the Reavers themselves.  It’s sort of like, literally, “going native.” 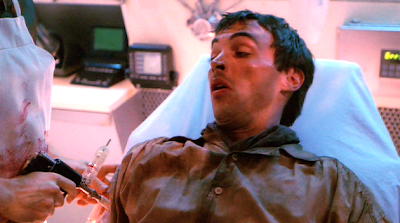 This material doesn’t connect explicitly to Serenity (2005), the Firefly feature film which features a revelation about the Reavers, but it doesn’t exactly contradict what we learn there, either.  In fact, some of the confusion and apparently-conflicting details about the Reavers reflects real-life historical context, particularly white man’s misconceptions about the Native Americans.  There was gossip and rumors about these so-called “savages,” and, of course, many proved not to be true.  But nonetheless, for the East Coast, “civilized man” of the Old West there was a belief, like the one espoused in “Bushwhacked” that the savage ‘other’ was not quite human, not “a man” in the strictest sense or meaning of that word.

Like many other episodes of Firefly, “Bushwhacked” also positions Mal as the voice of knowledge and experience regarding the chaotic terrain of the frontier.  He provides both the crew and the audience most of the background  information regarding the Reavers, and even saves the day by recognizing that the survivor is changing to become a Reaver himself.  Also, Mal saves the military greenhorn, Harken, who though intelligent and educated, has almost no experience dealing with the challenges of the frontier. 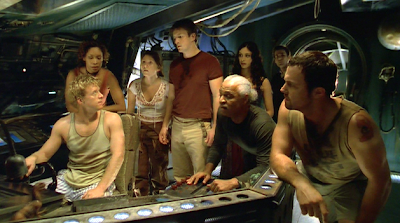 The term “bushwhack” might be defined as “waiting in place in anticipation of an attack, usually in some kind of wilderness.”  Again, this definition leads us back to a consideration of Firefly’s post-Civil War/Old West milieu. Here, Serenity’s crew is metaphorically bushwhacked by the Reavers, who have left a “sleeper” behind following their raiding party’s departure.  Harken might also say to be bushwhacked, since he is literally the victim of a surprise frontal assault from the newly-minted Reaver.

By-and-large, “Bushwhacked” thrives as a pointed contrast between two space captains; between Mal and Harken. One boasts all the benefits of wealth, education, class, and military hierarchy while the other is an outlaw, but a man, as noted above, with incomparable experience.  In “Bushwhacked,” then, it turns out that Mal’s skill-set is the more valuable one, a fact which can also be extrapolated about the frontier in general. There is a real advantage to having been around the block a few times, and that’s one of the core conceits of the Whedon series. Mal transforms his experience in space into survival for the crew again and again, while having almost no other tangible resources upon which to call. 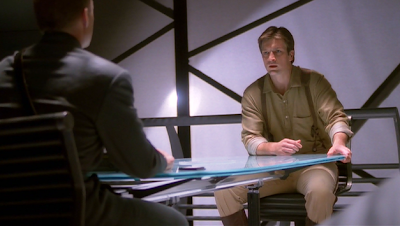 “Bushwhacked” also explores how this futuristic society treats its dead. Shepherd Book demands that the dead crew people be given a Christian burial, and this demand too is part of the frontier milieu.  There’s a scene, for instance, in Michael Mann’s Last of the Mohicans (1992) in which a scouting party comes across dead colonist families and must decide whether to give them a proper funeral, or leave the bodies untouched, as they are, lest they make the attackers aware of their presence.  Book’s subplot here reflects that idea; of trying to bring civilization -- and decency -- to a dangerous frontier.

“Bushwhacked” also features the old sci-fi trope of a crew discovering a “Mary Celeste” in space,  a vessel in which the crew has disappeared, seemingly in a tearing hurry.  The Mary Celeste trope has also been featured (and name-checked) in episodes of series like Space:1999 (“The Guardian of Piri”) and Doctor Who (“The Chase”). Here, the idea of a mysteriously abandoned ship is minimized quickly, however, since the dead crew is promptly discovered 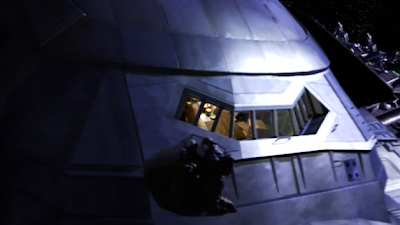 In terms of character arcs, there’s a lot of terrific material in “Bushwhacked.” In the episode’s inaugural scene, for instance, we see the crew relaxing together, playing a game of something that, at least broadly, resembles basketball.  There’s also a terrific interlude later which expresses Simon’s fear of donning a spacesuit and going into an environment without atmosphere.  This sequence possesses a great punch-line, courtesy of Jayne, but also develops and augments the episode’s sense of dread and danger.  On the soundtrack, we hear Simon’s labored breathing as he grows more and more nervous on his walk into the derelict ship. In moments like this, Firefly really excels in making the audience feel that we are there, with the characters, negotiating this crisis, and this dark frontier.