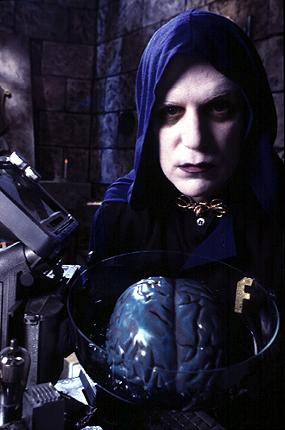 The brain is (according to Wikipedia) “the center of the nervous system in all vertebrate and most invertebrate animals.”  The brain “acts on the rest of the body both by generating patterns of muscle activity and by driving the secretion of chemicals called hormones. This centralized control allows rapid and coordinated responses to changes in the environment.”
In cult-television history, however, the humanoid brain has played a different kind of role.  It has survived death (often in jars filled with colored fluid), and it has been the form of life evolved beyond the need of physical, biped bodies. 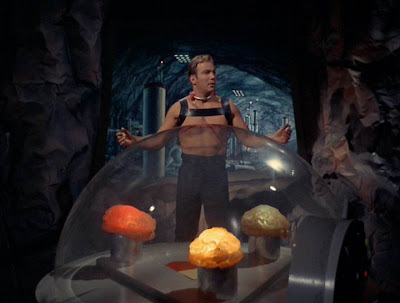 In Star Trek (1966 – 1969), the Enterprise encountered three individuals of highly-advanced brain creatures, the Providers, on the distant world of Triskelion.
In the more notorious episode “Spock’s Brain,” aliens in go-go boots incapacitate the crew and surgically-remove Mr. Spock’s brain so that it can control the faculties of their underground complex on a distant world. 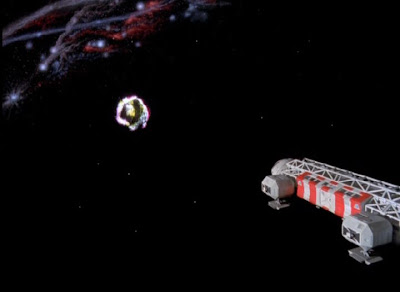 In Space: 1999 (1975 – 1977), Moonbase Alpha traveled through a region of space where a gigantic entity, a space brain, dwelt, in an episode titled, appropriately “Space  Brain.” This brain was capable of defending itself with crushing antibodies and was found to be on a collision course with the errant moon.  A second season story, “Brian the Brain” involved a malevolent robot brain, Brian, who had murdered his human crew.
In the second episode of the short-lived series The Fantastic Journey (1977), a group of travelers on an island in the Bermuda Triangle come across a metropolis where a giant brain controls all the city’s activity – including the capacity to send lost travelers home – in “Atlantium.”
The old trope of the brain in a jar has appeared on Doctor Who, in the serial “Brain of Morbius” and in the Wonder Woman (1976 – 1979) episode “Gault’s Brain.” 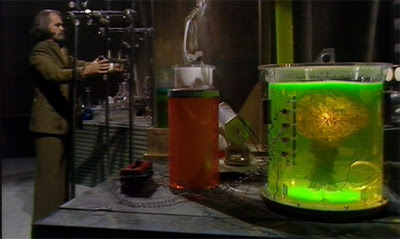 In the former program, the Fourth Doctor (Tom Baker) and his companion Sarah-Jane Smith (Elizabeth Sladen) land on a world where a mad scientist is seeking to place the brain of a Time-Lord renegade into a Frankenstein-like body. 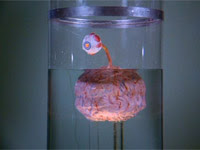 In the latter show, Wonder Woman (Lynda Carter) tangles with Gault (John Carradine), a brain with frightening telepathic powers….
The X-Files (1993 – 2002) featured an episode in its seventh season titled “Hungry” in which a genetic mutant boasting qualities of a shark could survive only by feasting on human brain.
"Brain Guy," (Bill Corbett) meanwhile, was a regular character on Mystery Science Theater 3000 in its Sci-Fi Channel years.  A ghost-faced Observer, Brain Guy carried his brain around -- exposed -- in a pan.
at October 07, 2013