Saturday Morning Cult-TV Blogging: Return to the Planet of the Apes: "Tunnel of Fear" (September 27, 1975)

In “Tunnel of Fear,” this week’s episode of the animated series Return to the Planet of the Apes (1975), General Urko plans a new hunt that will eliminate the humanoid threat forever.

Jeff (Austin Stoker), meanwhile, wants to move the jeopardized and primitive humanoids to a new location where they can be protected from this and all future ape aggression.

Accordingly, Jeff and Bill seek assistance from Cornelius and Zira in Ape City.  The astronauts from Earth’s past return to the city they recently escaped from and encounter a giant spider in the sewer system.

After they reach the chimpanzee’s lab, the astronauts ask for help, and Cornelius, after grappling with his conscience, realizes he can help the astronauts get the humanoids to a new home. He knows just the place too. His archaeological dig in the Forbidden Zone runs near an underground river, and leads into a serene, hidden valley.  It would be the perfect home for the humanoids. 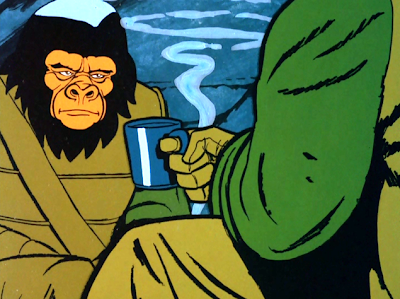 “Tunnel of Fear” opens with two gorilla sentries talking about General Urko and his plans for total ape domination of the planet, while they sip hot coffee by chilly moonlight.  This scene is one of the (many) reasons I appreciate this particular Saturday morning series.  It would have been just as easy to create a scene with Urko himself making his plans (before the council, or his troops, perhaps), but instead we get this boots-on-the-ground discussion of strategy between “grunts” and it seems more like a scene from Shakespeare’s Henry V than a moment on a 1970s cartoon.  Urko’s efforts, after all, impact the men -- er apes -- he leads into battle.

The episode also presents a nice moral dilemma for Cornelius and Zira.  Dr. Zaius trusts the pacifist chimps, and solicits their help in capturing Blue Eyes and the humanoids.

Meanwhile, Bill and Jeff want the same individuals to help them get the humanoids to safety.

Thus Cornelius and Zira need to determine the “higher” morality in this case, and must grapple with feelings that they are betraying Zaius, and therefore their own people.   The scene wherein Cornelius sort of “waffles” -- going back-and-forth from side-to-side -- is especially well-presented t and showcases both perspectives ably.  This scene is especially good for children to watch, as it involves decision-making, and ways to choose when both options might rightly cause harm to some party.  In this case, Cornelius realizes it is better to betray Zaius than to let the innocent humanoids die, and he speculates that someday Zaius and the Planet of the Apes might even be happy that he chose this way. 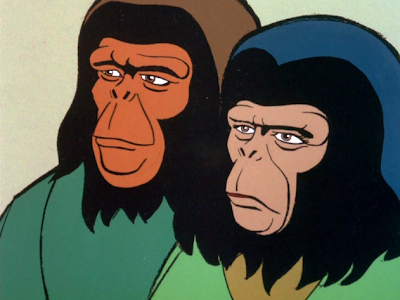 “Tunnel of Fear” features only one overtly juvenile moment. In the sewers, Bill and Jeff encounter the aforementioned giant spider and get trapped in its web, before breaking free.  This is the first outbreak of pulp childishness on a TV series that otherwise avoids such clichés.  The whole idea of a giant spider in the sewers is a silly one. If there were really spiders of this size in Ape City’s sewers, certainly it would be a public health crisis.  And besides, the encounter with the giant arachnid adds nothing to the overall story.  It’s just a “danger” for the kiddies to enjoy between scenes of dialogue. 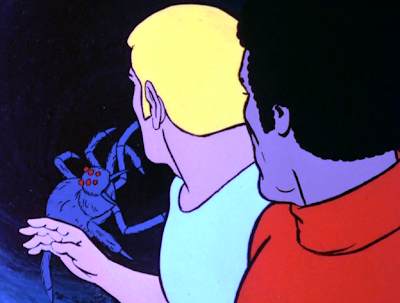 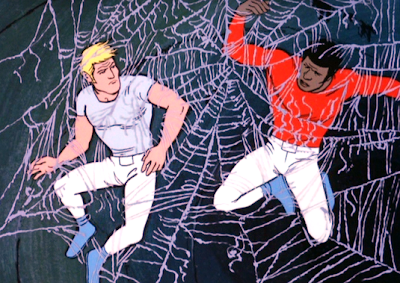