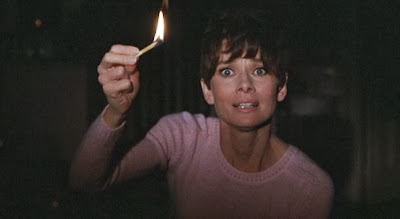 10. Misery (1990)
Misery beats out The Stepford Wives, Rosemary's Baby, and The Silence of the Lambs for the #10 spot just because I've re-watched it more often. Much like my #1 pick, it's driven by the dialogue, not by the action.

8. Se7en (1995)
This dark, twisty thriller would probably be less memorable without the Pitt/Freeman pairing. The way detectives Somerset and Mills are foils for each other makes the movie stand out.

7. The Shining (1980)
The greatest ghost story I've encountered. There's no "restless spirit that can be laid to rest" or possession premises to buy into. The ambiguity of the evil sets the bar for the suspension of disbelief remarkably low.

6. The Texas Chainsaw Massacre (1974)
I first read about TCM in Horror Films of the 1970s and I knew I had to see it immediately, because I had to know if it could really be as crazy as it seemed. It's dated in some ways, but that doesn't lessen the impact of the "no learning" paradigm. Plus, "Look what your brother did to the door!" makes me laugh every time.

5. Funny Games (1997)
Like Benny's Video (1992) before it, Michael Haneke's Funny Games explores the propensity for violent media to desensitize young people and divorce them from reality. In Benny's Video, we are helpless observers, like Benny's parents, trying to make sense of what the child has done. Funny Games develops the same theme as the two young men talk us through their thought processes and show us their version of reality.

4. Night of the Living Dead (1968)
Basically the quintessential horror film. The graveyard opening recalls traditional Gothic horror, the Venusian radiation plot is classic '50s sci-fi, and the whole presentation epitomizes the '60s drive-in aesthetic, but it points to the future of gory violence and the modern zombie concept.

3. American Psycho (2000)
Has more unlikely source material ever become such a pop-culture touchstone? It's scary, hilarious, smart, and cleverly ambiguous. It's a lot of content in a very entertaining package.

2. Psycho (1960)
I'm so glad I got to see Psycho before I had anything to compare it to. It scared me half to death the first time, and only a little less each time after.

1. Wait Until Dark (1967)
Audrey Hepburn is heartbreakingly vulnerable as a conned blind woman, but she summons incredible strength and ingenuity to fight back. Alan Arkin's Harry Roate Jr. (from Scarsdale) could be a Breaking Bad villain. But it's the layers of deception that keep the dialogue interesting over many repeated viewings.

Jackson:  I enjoyed reading your list, and appreciate your shout-out to Horror Films of the 1970s very much!  I also love that your list encompasses both Wait Until Dark and American Psycho, two very-different takes on stalkers/slashers, in terms of content and style.

I’m also glad you call attention to some worthwhile nineties films, particularly Se7en.  That film genuinely upsets me.  The ending is so nihilistic.  And yet, what works about the film is the uneasy sense that it is taking place in a timeless city -- Purgatory? --  and one, perhaps, imagined by Dante.  Bleak and despairing, Se7en never fails to rattle me (and certainly lives up to the Fincher motto of “movies should scar.”)

I like and enjoy Misery a lot as well, especially for the performances and the stand-out “hobbling” sequence.  Thinking of that scene, I figure for next Halloween I ought to do a list of “most terrifying” or upsetting sequences in a horror film.  That hobbling would have to rank high…

Also good to see Jurassic Park make the list. That Spielberg film is a great work of art, and certainly walks the tightrope between science fiction and horror.  The “mad scientist” is a scientist, of course, but also, in a very real sense, a movie monster like a slasher or a vampire.
at October 24, 2013