In 1978, Toho and Hanna-Barbera combined forces to bring Godzilla to Saturday morning television on NBC. This animated or cartoon version of Godzilla, aired from 1978 to 1981, and was a ratings success.

This Godzilla TV series followed the adventures of the crew of a research ship called the Calico.  Aboard the Calico was a scientist, Dr. Quinn Darrien, her nephew, Pete, and her research assistant, Brock.  Running the Calico (think: Jacque Cousteau’s Calypso) was Captain Carl Majors.

The last crew-member was the strangest: Godzilla’s cousin “Godzooky.” 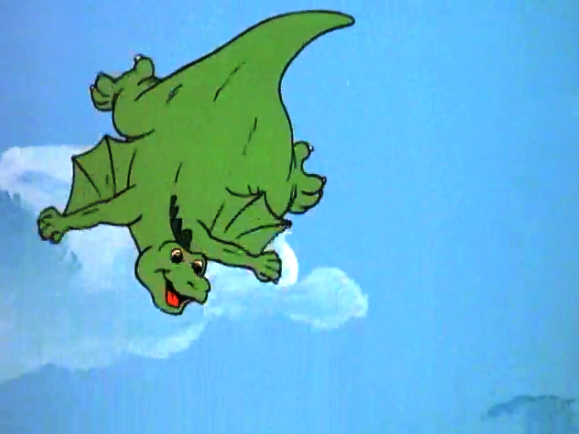 The crew of the Calico always traveled with a kind of distress signal, a Godzila “button” which the crew members could push to summon Godzilla, and get his (virtually immediate…) help.

When Godzilla appeared on the series, his trademark roar was missing in action, and his dorsal spikes didn’t quite look the same as they had in the movies.  In this iteration of the legend, Godzilla could also shoot laser beams from his eyes, as well as breathe fire at his enemies.

The series format in the Godzilla cartoon is fairly repetitive.

The Calico inadvertently gets into danger and encounters a new monster or otherwise giant threat.  The crew calls for Godzilla, and the defender arrives to save the day.  As he fights, Godzilla is cheered on by his human friends (“Watch it, Godzilla…behind you!”). 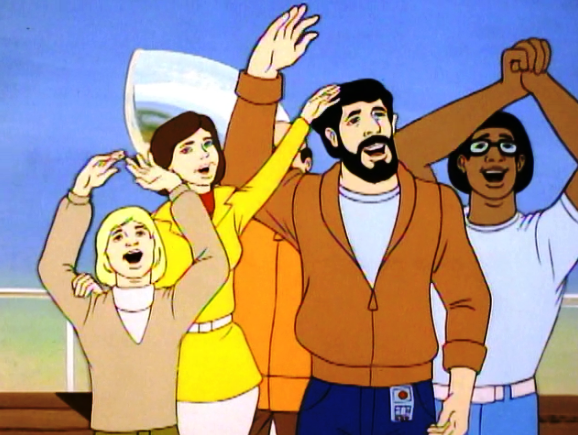 Then, when it is all over, Godzooky does his shtick, usually something comical...but juvenile. 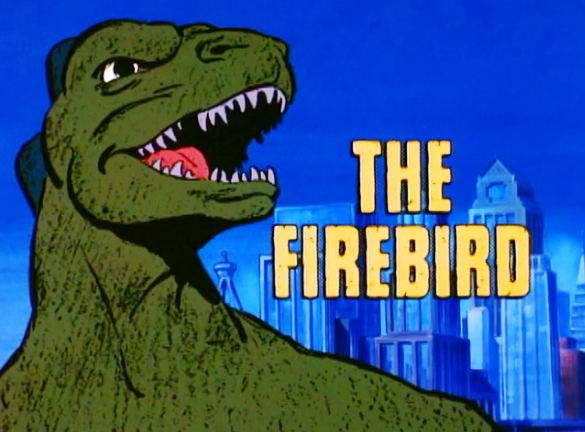 In the first episode of Godzilla, “The Firebird” (September 9, 1978), the Calico – which is equipped with helicopter and hovercraft -- encounters a tidal wave and Earth tremor.

The origin of this disaster is an island in the Pacific. A volcano there has been dormant for millions of years but now it erupts, and a giant pterodactyl (though not Rodan, alas…) emerges from it to wreak havoc.

When the tidal wave imperils the ship, the crew notes “We better call Godzilla, it’s our only chance!” Godzilla shows-up, on cue, and lifts the ship out of the water.

Before long, Godzilla ends up battling the giant pterodactyl for dominance. Quinn worries the creature may be seeking to reproduce, and lay eggs, but Godzilla traps it in a cave and is thus victorious. 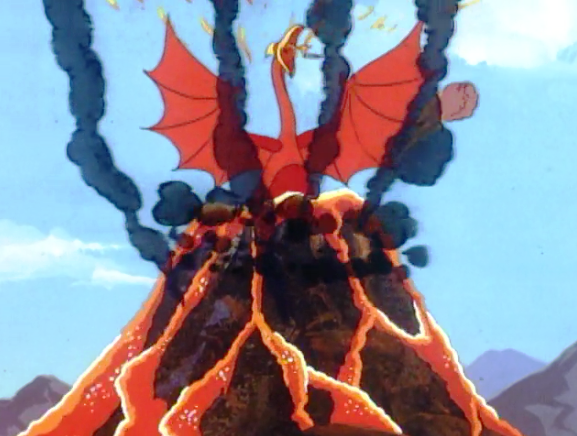 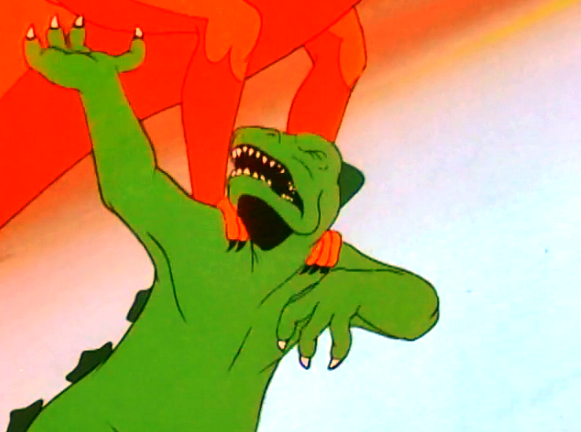 “The Firebird” sets the tenor for the series, in large part.  Godzilla functions, drama-wise, as a pinch-hitter for the humans.  As soon as they are faced with a crisis they can’t handle, they press the Godzilla-button and the atomic lizards substitutes for them.

In animated form -- at least starting out -- this iteration of Godzilla doesn’t seem to have a lot of character or personality, at least in comparison to his live-action counterpart, who would occasionally do something nutty and exuberant, like perform a victory dance (Monster Zero).

Instead, Godzilla largely comes off as a friendly T-Rex.  We don’t know what really motivates him, or why he feels compelled to rescue the Calico.  We get no background on how he met Dr. Quinn or Pete, or how Goodzooky joined up with the crew.  All that material is set in stone by episode one and un-remarked on.  It might have been interesting to explore, during the series, Godzilla's origin, or history.

Thus, the episodes of the 1970s Godzilla cartoon are largely predictable and repetitive, and their prime value is as nostalgia.  It is neat, however, to see different locales (like San Francisco...) get totally in destroyed in cartoon form.