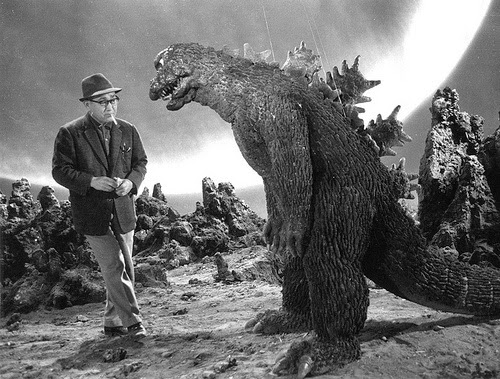 Godzilla's third "father" is the late Eiji Tsuburaya, a  remarkable talent who created Toho's visual effects department in 1939, and then served as its long-time director.

In all, Tsuburaya served in that capacity on over two-hundred films during his impressive career, and also created Tsuburaya Productions in the 1960s: the outfit that gave the world Ultraman.

Revered as a "god of special effects" in Japan, it was Tsuburaya who first devised the idea of dropping stop-motion animation (too expensive and too time-consuming...) for the original Godzilla (1954), and going instead with "suitmation."

This approach consisted of a man in a monster suit, an altered film speed (to suggest weight...), and combined with highly-detailed miniature models for vehicles and cityscapes.

That template became the trademark for the Godzilla series.
at May 12, 2014