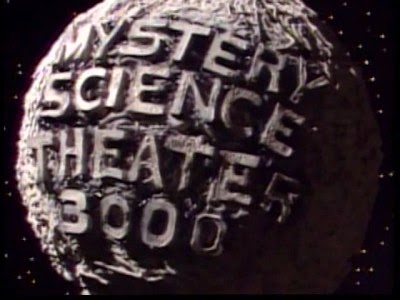 Mystery Science Theater 3000 (1988 - 1999) is a long-standing cult-TV favorite from the mind of Joel Hodgson, a series that simultaneously riffs on "B" movies and also, in some way, showcases a real affection for those genre films of yesteryear.

Over the years, there were many cast changes on MST-3K, and so the introductory montage (and the lyrics to the theme song...) also changed.  Today, I want to take a look back at the first introduction I ever saw, from the early Comedy Central years, circa 1991.

As we start out, we see a black screen and a then a title card suggesting that, if possible, the audience should "turn down" the lights.

This suggestion deliberately evokes the dark of a movie theater and the typical movie-going experience but it also establishes, in some fashion, the gentle nature of the ribbing that the "B" movies will receive. For under the suggestion to down the lights is the written modifier "where applicable."  The choice is up to us. 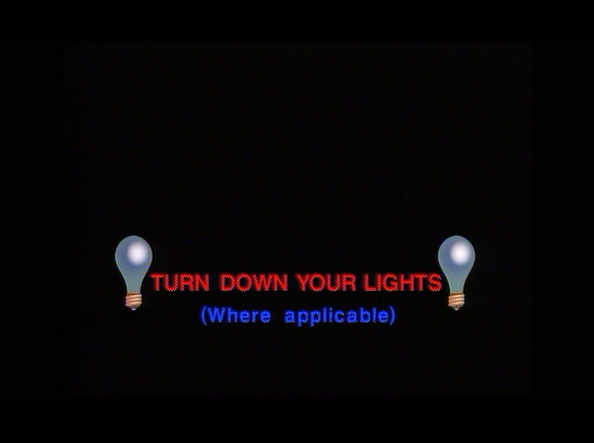 Next, the song establishes the setting for the series.  Mystery Science Theater 3000 is set in the "not too distant future," next Sunday "A.D."

At the same time that we hear these words, we see a miniature landscape or set that demonstrates ingenuity in construction, even if it doesn't look authentic, or particularly convincing.  There's a strong reflexive nature to this landscape.  Many of the movies lampooned on the series also feature unconvincing miniature or model sets.

This visualization makes us understand that Mystery Science Theater 3000 is, in some way, a version of the productions it teases: a way-out narrative with a low budget. 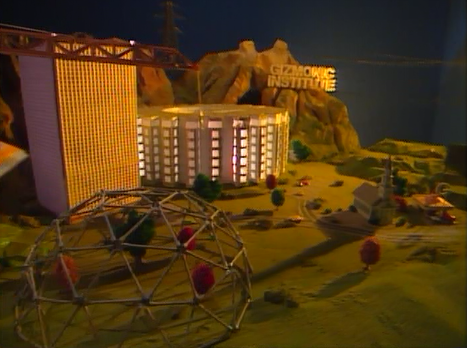 Next, we move in "Gizmonic Institute," (later Deep 13), where the central action is to occur. 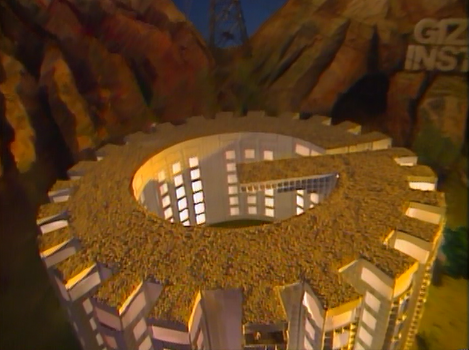 In the following frame, we meet our star: sleepy-eyed, gentle Joel Robinson (Joel Hodgson).  We are informed explicitly by the song lyrics that Joel is "not too different" from you or me, a fact which makes him our easy point of identification, and, at least implicitly, suggests that we all have the capacity, and perhaps even urge, to comment or riff on bad movies. Joel is an Every-Man, but a clever one. In the next frame, we see kindly Joel at work, doing a good job "cleaning up the place." Again, his demeanor is friendly and helpful, which establishes that he is our hero.  Just minding his own business... 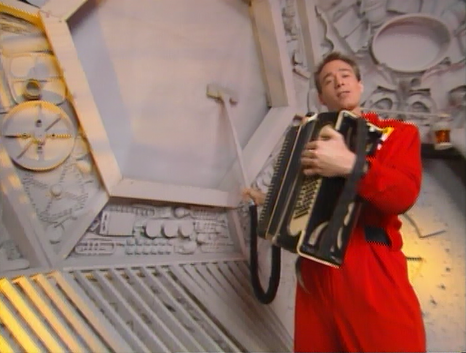 Next, our villains literally rise suddenly into the frame. As the lyrics tell us that Joel's bosses don't like him, this evil duo ascends into the composition, lit from below by a garish green light.

The villains here are Dr. Clayton Forrester (Trace Beaulieu) and TV's Frank (Frank Conniff).  The garish green light -- highlighting and lengthening the shadows on their face, again -- seems like a touch from a B-movie, perhaps of the 1960s. 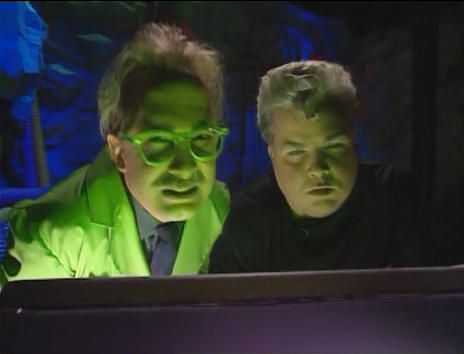 Next, we learn that these antagonists capture Joel and shoot him into outer space, and then we get a wonderfully expressionistic shot of Dr. Forrester's hand pulling down a lever and activating the launch sequence, as electrical sparks fly.

Once more, the nature of the composition is important here: the launching lever is made to look huge and menacing under the auspices of the low angle selected.  Green is also, apparently, the color of evil, as we see the same garish emerald light on the rocks around the lever, and on Forrester's lab coat.

Dr. Forrester's color is indeed green, and since he is in total control of the experiment, that green seems to spill out into the rest of Deep 13. 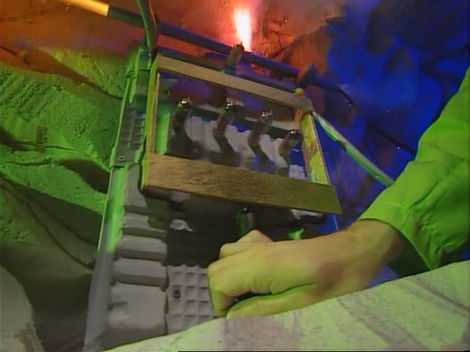 Next up: a view of a building coming apart at the seams and the Satellite of Love -- Joel's ride -- launching. Once more, the special effects are dodgy, though resourceful, and again that quality seems an indicator of the series' commentary on B movies.  Special effects are frequently bad in the films teased, but many also demonstrate a kind of zany, zealous ingenuity. 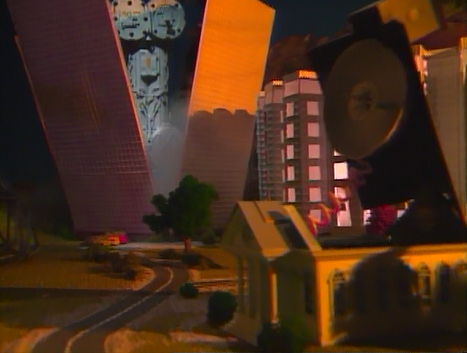 In the following frame, the premise of the series continues to be established.  We learn that Dr. Forrester is experimenting on Joel's mind and sending him "cheesy movies" in an attempt to break it.

Here Frank extends his hands while holding two video-tapes, as if sending us the cheesy movies.  After he does so, Dr. Forrester looms into the composition, establishing visually his supremacy over Joel, Frank, and also the audience.

Yet, his specific words "la la la," don't suggest menace, but humor, and that's MST-3K's particular alchemy indeed. Cheesy movies might be horrific or otherwise strange, but the show will universally treat them...lightly. 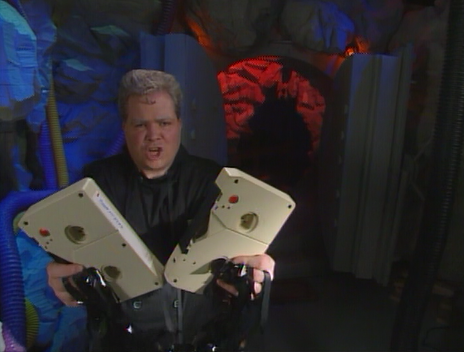 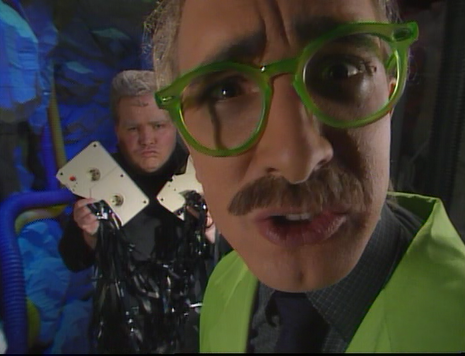 Below, a sample of what we have in store: a clip from one of the cheesy movies. This particular image changes in the intro over the years, but in this case, the image is from The Crawling Eye (1958).

This image is important, because it is also the first view of the auditorium where Joel will watch the movie, and comment upon it.  From the positioning of the camera, it as if we are in the theater behind him, looking ahead at his "front row" as well as the rectangular screen.

The tremendous ingenuity of Mystery Science Theater 3000 is that Joel not only introduces movies -- which the audience watches -- as a kind of host, but he interacts with them.  This trademark "silhouette" shot suggests that three dimensional approach perfectly. We aren't just watching a film: we are watching Joel (and his sidekicks, the Bots) watch a film. 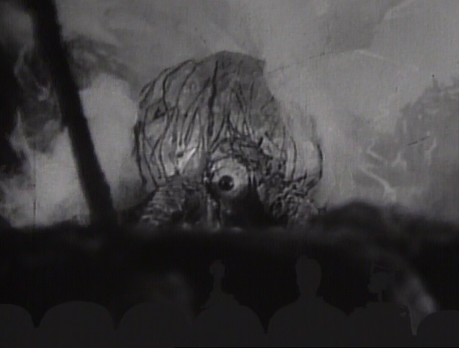 The next several shots show Joel and the gang laughing and having a good time while watching -- a mode for the audience to emulate.  The undercurrent is -- don't take any of this too seriously. 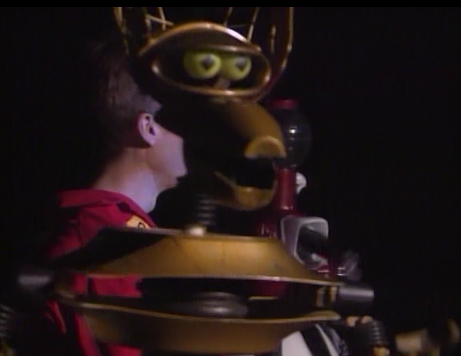 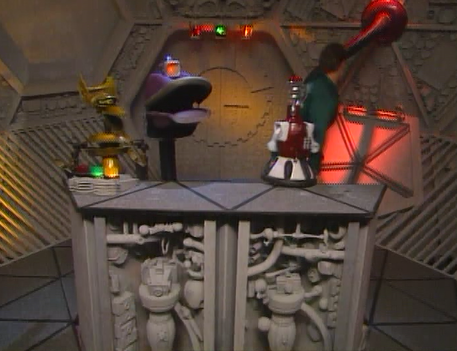 The next shots show the long tunnel towards the auditorium, and nicely build-up a sense of anticipation about the start of the episode. 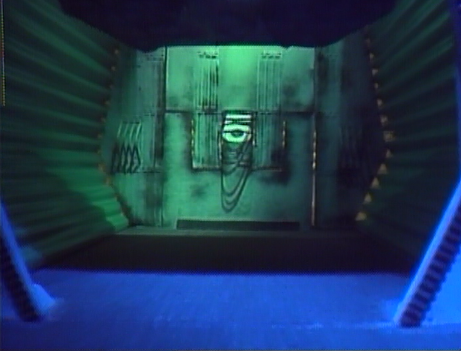 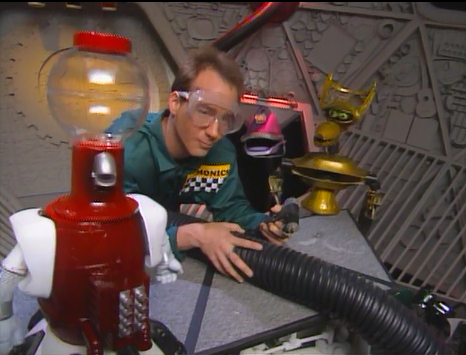 Next, we meet the rest of the crew (or cast), namely Joel's wisecracking robots.  Robot Roll Call introduces Cambot (the guy filming the show...), Gypsy, Tom Servo and Crow. 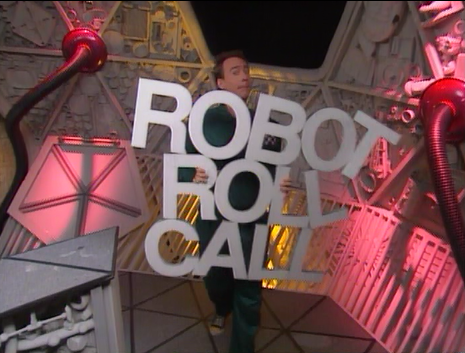 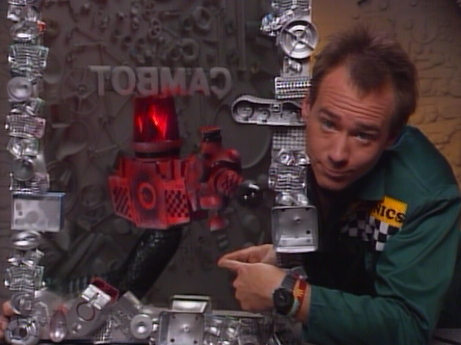 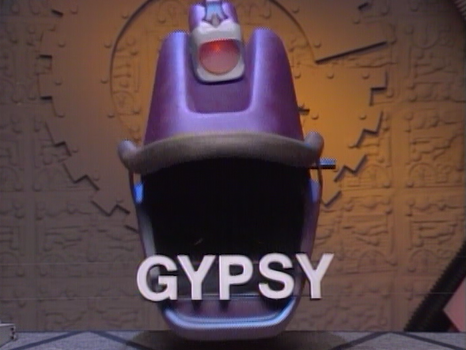 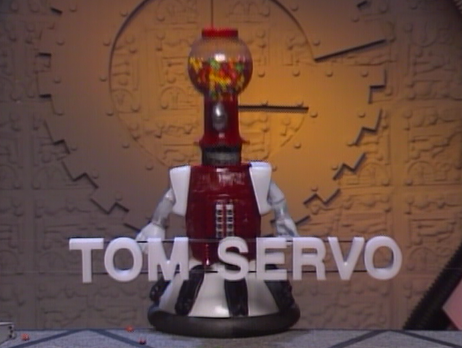 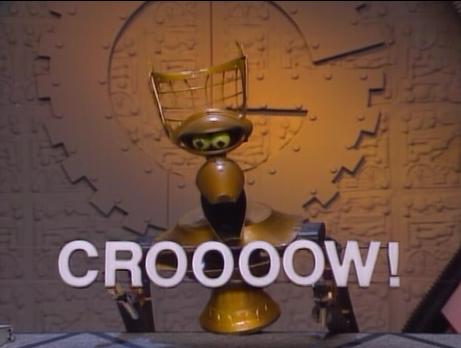 A gentle warning comes next.

The lyrics tell us that if we are wondering how Joel "eats and breathes" and other "science facts" we should repeat to ourselves "it's just a show," and we should "really just relax."

The second frame below visualizes the idea not to take "science facts" too seriously because the show's scientists -- Forrester and TV's Frank -- bop into the lower quadrant of the frame, right after the shot of the Satellite of Love cruising by in outer space.

If we take science facts too seriously, we would have to ask: why is the human scale wrong compared to the ship's? How are Forrester and Frank breathing there in space?

See where this obsession becomes problematic?

The frame featuring Forrester and Frank and the just-passed SOL thus literalizes the concept of not taking MST-3K too seriously: we're just watching a fun show.

In essence, the two characters "break" the illusion of reality that the image of the ship attempts to portray. 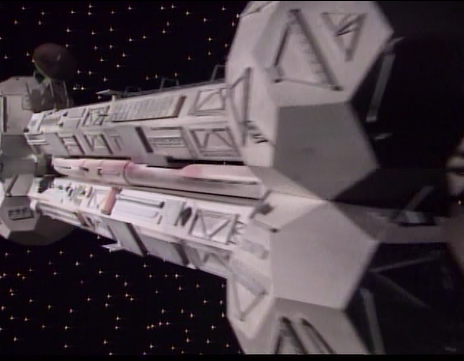 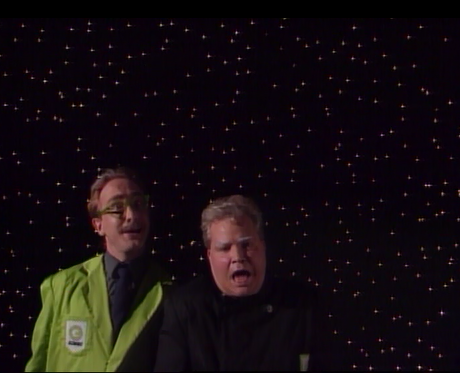 The next series of shots reveal more craziness on the Satellite of Love, and make a visual note, at least tangentially, regarding MST-3K's cultural literacy.  Joel inside the yellow drumming power suit is a clear visual reference to the power loader in  James Cameron's Aliens (1986). 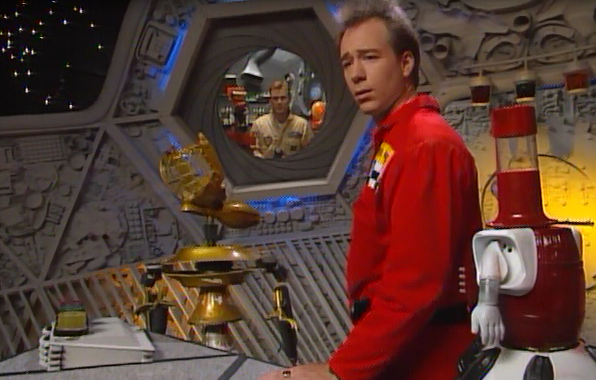 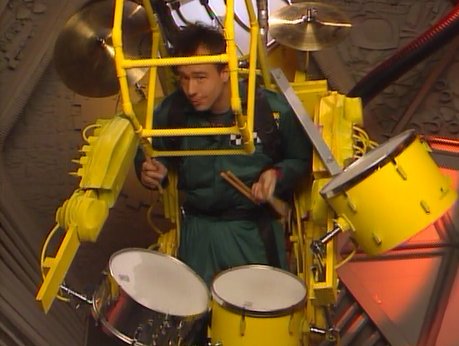 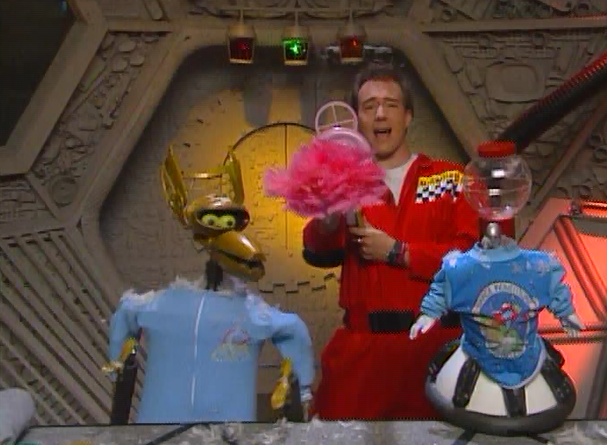 Finally, our title card: an orbiting planet (or ball of string) with the series title on it.  Then, that image recedes, and we're back in the theater hallway, as the show is about to begin... 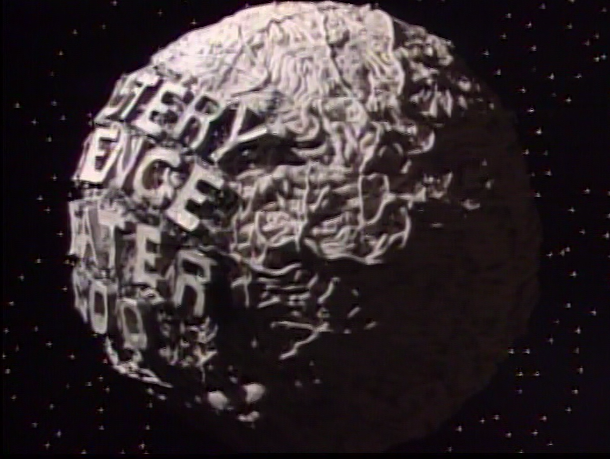 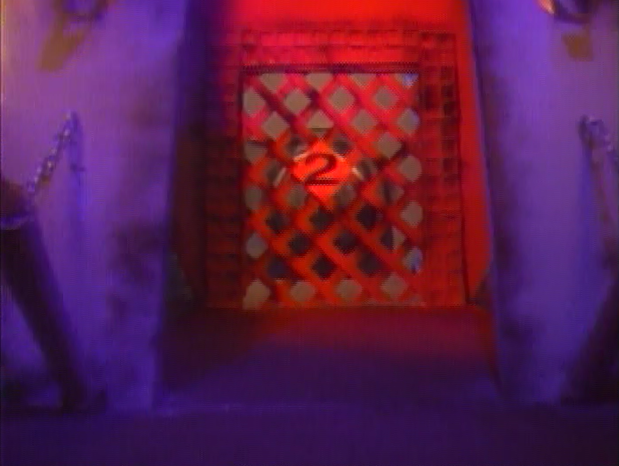 Below is MST-3K's introduction in action, with its catchy theme tune.