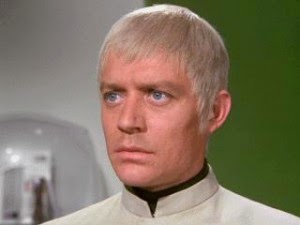 My new article at Anorak is one I have been meaning to write for some time now.

It's all about the conventional wisdom -- and the mistake -- that the characters in Gerry Anderson live-action series are somehow wooden.

On the contrary, I find these characters quite realistic, and that is the subject of "Wooden Tops: The Five Best "Real" Characters You Meet" in the works of Mr. Anderson." 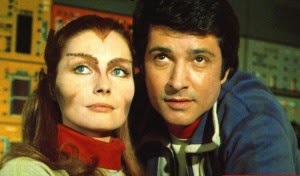 A VERY long time ago — in the late 1960s — a newspaper critic somewhere wrote what he believed was a witty joke.

He noted that the characters and performances in the live-action works of producers Gerry and Sylvia Anderson were “wooden.”

You see what he did there, right?

Gerry and Sylvia Anderson had often worked with puppets on TV series such as Stingray(1964) and Thunderbirds (1965), so this joke was no doubt a clever slam on the actors and writing in the production he was actually reviewing.

Even when they weren’t puppets, Anderson characters were about as real as puppets, the joke went.
In this case “wooden” might be defined as simply “stiff and unnatural”
or “without spirit or affect.”

For literally decades now, this joke about “wooden’ characters and performances has been mindlessly regurgitated, and applied to what sometimes seems every Anderson review imaginable.

But the question we must now ask is, simply: is the oft-repeated slam actually true?

Or is the over-used “wooden” descriptor just a form of conventional wisdom that has gone unquestioned for so long that it has now become mindlessly accepted?

To better answer that question, I respectfully submit below the five “real” people you may meet in the live-action productions of Gerry and Sylvia Anderson.

I consider “real” (as opposed to “wooden”) to mean in this context that the characters showcase a sense of verisimilitude.  They closely resemble people you have encountered and may know in life.

Similarly, a “real” person is someone replete with contradictions and failings (rather than just an affectless avatar for “wooden” dialogue or exposition).

In other words, these folks may look like one thing, but when you scratch
the surface a bit you find there is something deeper, and maybe even a little conflicted going on inside.