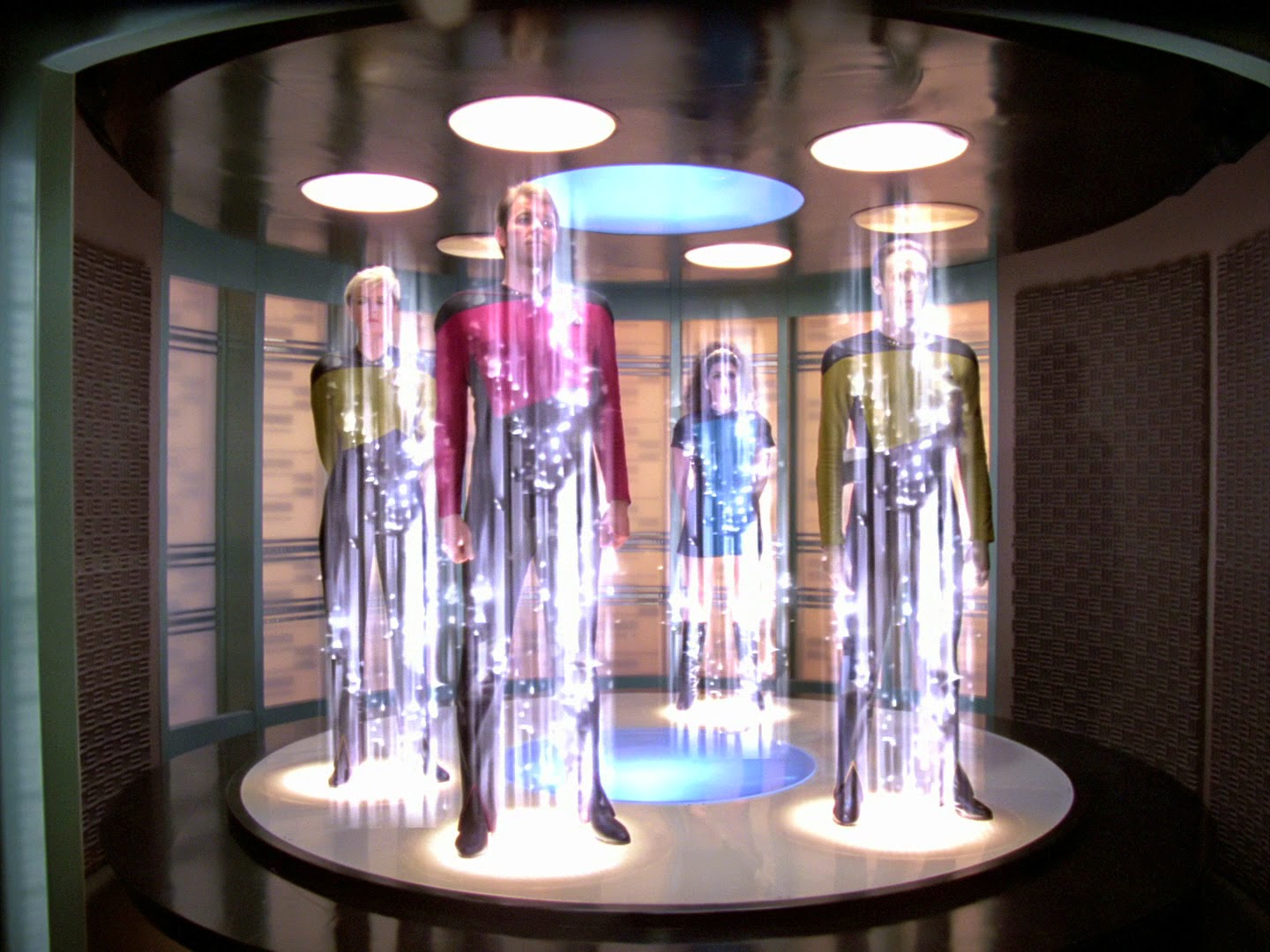 At this point in world history, teleportation is theoretical in nature, but it has been featured commonly throughout cult-television programming.

The most famous teleportation device in science fiction television history, of course, remains Star Trek’s transporter device, a teleporter which sends Starfleet crews “beaming” from a station or transporter room to planetary surfaces.

Originally designed as a budgetary expedient so that expensive model work involving shuttles wouldn’t be necessary, the transporter and its glittery visual effects soon became a trademark of Gene Roddenberry’s universe. 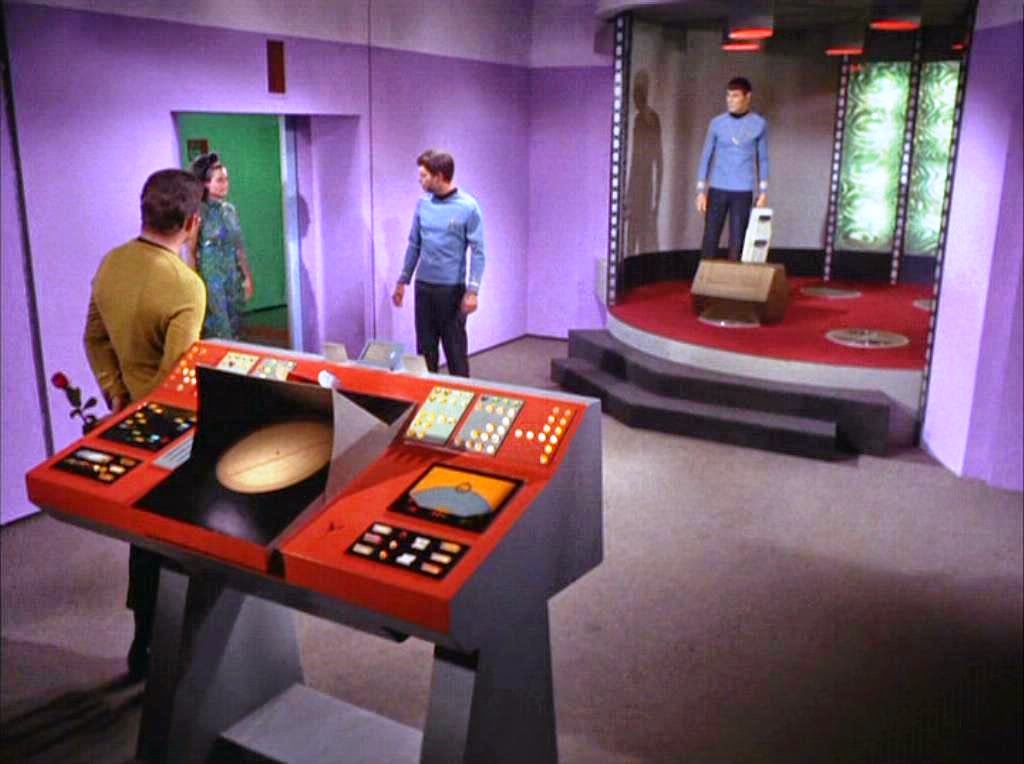 Over the years, the Star Trek (1966 – 1969) transporter also went beyond being a mere teleporter. In one episode of the original series, “The Enemy Within,” a transporter malfunction physically split Captain Kirk (William Shatner) into two beings; one good, one evil.

In “Mirror, Mirror,” interference from an ion storm transported a landing party from out dimension into a parallel one, and so forth.

Late in the series (“Day of the Dove”) the Enterprise crew began to experiment with “intra-ship” beaming, the act of teleporting from one point inside the vast starship to another.

Later incarnations of Star Trek followed along the same approach. One episode of The Next Generation (1987 – 1994) featured an episode about an officer, Barclay (Dwight Schultz) saddled with a phobia regarding transporters.  In the course of the episode, that phobia proved to be well-founded as Barclay began to detect floating alien worms in the transporter matter stream.

Other series have also featured teleporter devices.  Over the years, in serials including “The Seeds of Death” and “The Sontaran Experiment,” in the Patrick Troughton and Tom Baker Eras, respectively, teleporters called “transmats” were introduced. 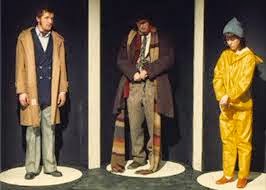 In the former case, the Second Doctor was unable to use a transmat or “T-Ma” device to get to the moon and avert an Ice Warrior invasion, so he must rely on a conventional rocket.

In the latter case, the Fourth Doctor travels down to an abandoned future Earth after leaving the Space Station called Nerva using a transmat. 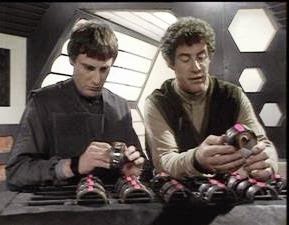 The advanced device is found aboard the alien derelict, the Liberator, Roj Blake (Gareth Thomas) and his men use it for land-fall and fast escapes throughout the first three seasons of the series.  One can call for teleport by wearing a "teleport bracelet" (pictured above).

Amusingly, the Liberator crew often stumbles or trips when it lands on other worlds, via teleporter, a “realistic” touch for the device, and one not featured on the more romantic and idealistic Star Trek. 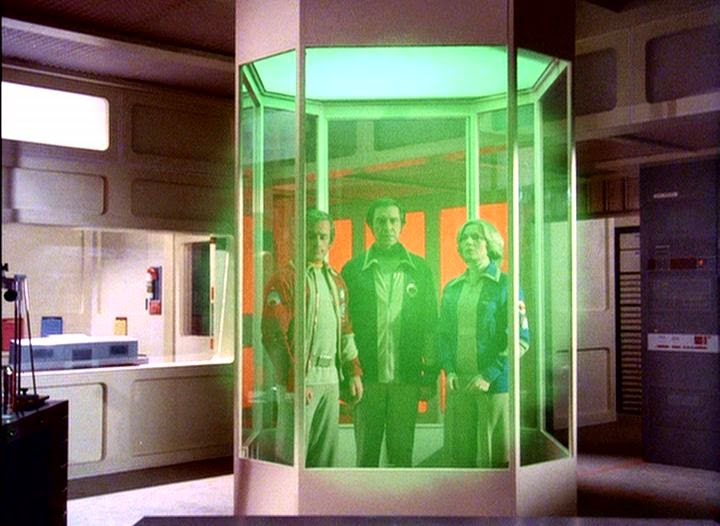 Gerry and Sylvia Anderson’s Space: 1999 (1975 – 1977) also featured teleporters occasionally, though most frequently during its second season.

In “Journey to Where,” Commander Koenig (Martin Landau), Dr. Helena Russell (Barbara Bain) and Alan Carter Nick Tate) travel from the errant moon back to Earth, but the transfer goes wrong and lands them in Earth’s distant past.

Teleporters also appear in “Devil’s Planet,” and in the final episode of the series, “The Dorcons.”