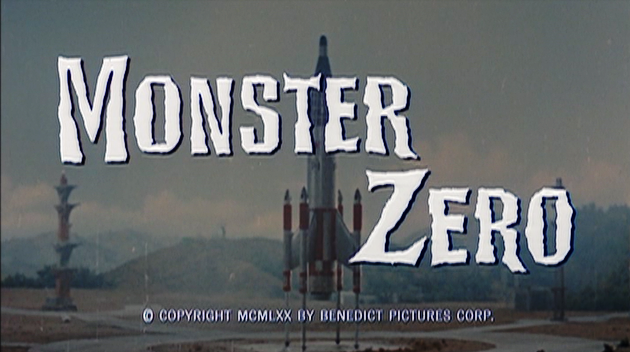 Aliens arrive in the Godzilla franchise during 1965’s imaginative and spectacular Monster Zero, also known as Invasion of Astro-Monster.

The planet’s Controller (Yoshio Tsuchiya) reveals that his world is being ravaged by Monster Zero, a powerful creature which the astronauts recognize as King Ghidorah.

The Controller proposes a trade. The humans will help the X-aliens acquire Monster Zero One (Godzilla) and Monster Zero Two (Rodan), and in exchange for their help, the highly-advanced denizens of Planet X will provide a miracle drug to cure all human ailments.

The humans agree to these terms, and Godzilla -- found at the bottom of a lake -- and Rodan -- hidden deep inside a mountain -- are captured and transported to the distant planet.

But the aliens are not as they seem, and demand the surrender of the Earth, lest all three monsters lay the green planet waste.

And when Godzilla and Rodan are apprehended by alien saucers for example, the huge monsters are trapped inside transparent force-field bubbles, and carried away to the stars.  The effects work for this and other sequences hold up beautifully, even today.  In short, the visuals of Monster Zero are often breathtaking.

There are other classic Godzilla moments here worth noting as well.

When the two human astronauts leave Planet X and the captured monsters behind, Godzilla and Rodan actually look to be worried -- at least to me -- like they don’t want to be left there, so far away from their homes.

This is one quality that I love from the Showa Era: there’s a sympathy and understanding for these monsters in these early films.  They are not just mindless creatures, but beings with personality and identity.

On a far more unique note, Monster Zero is also the film that features Godzilla’s most unique victory dance.

After he and Rodan send Ghidorah off packing on Planet X, Godzilla leaps into the air, crosses his legs, and alternates flipping his hands across his head and at shoulder level.

This is one of the weirdest things you could imagine seeing Godzilla do…and yet, his exuberance makes sense given that King Ghidorah is "the demon of the galaxy" and one tough opponent.