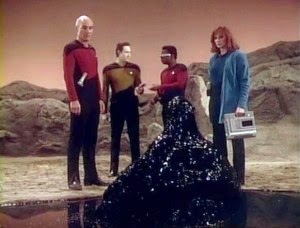 My latest article at Anorak is now posted, and it remembers -- and lauds -- five underrated episodes from Star Trek: The Next Generation.


IF Star Trek: The Next Generation (1987 – 1994) did not have the words “Star” and “Trek” in the series title — or the good fortune to air on TV the year after the box office hit, Star Trek IV: The Voyage Home (1986) — it may never have survived a few awkward, early seasons and come to achieve the reputation for greatness it currently enjoys with fans and reviewers.
The conventional wisdom — which happens to be correct in this case — is that Star Trek: The Next Generation did not really hit its stride until its third season.
The early seasons of the series re-purposed plots from the classic sixties series (“The Naked Now,”) played musical chairs with the Enterprise’s CMO, failed to introduce the series’ new villain, the Ferengi, in a way that made the race of “Yankee traders” seem menacing, and traded in preachy didacticism about the perils of nationalism (“Encounter at Farpoint,”) eating meat (“Lonely Among Us,”) and recreational drug use (“Symbiosis.”)
One dreadful episode, “Code of Honor,” featured a race of primitive black-skinned humanoids, and was absolutely cringe-worthy for its commentary on race. Another equally embarrassing installment, “Angel One,” featured that old genre cliché about a world run by — gasp! — women.
But one fact to consider about conventional wisdom as it regards The Next Generation is that it largely fails to account for the fact that some of the early episodes were also, in their own peculiar way, daring and even experimental.
That doesn’t mean that the following episodes were necessarily complete successes, but rather that they tried things, and in the process attempted to push the franchise in new and ambitious directions.  For that, they deserve recognition, and perhaps even a little love.
Accordingly, below you will find a list of the five most underrated episodes of Star Trek: The Next Generation.
And you’ll notice that all but one of them emerges from the series’ first two highly-uneven seasons, a period of great lows, but also some unexpected highs.