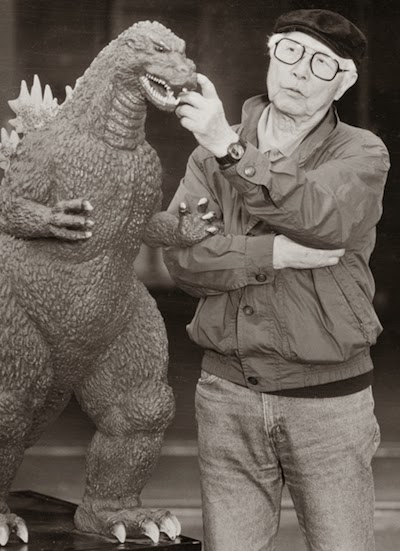 Godzilla's greatest director, Ishiro Honda worked with the legendary Akira Kurosawa (1910-1998) early in his film career as an assistant director before taking on the responsibility of initiating Toho's now-famous giant monster films.

Mr. Honda joined up with Toho before his service in World War II, in 1933, when Toho was still called Photo Chemical Lab (PCL).

One of Honda's most impressive non-Godzilla cinematic efforts is the haunting (and highly disturbing) Matango (1963), a film known in the United States as Attack of the Mushroom People.

This film involves a group of people who are lost at sea and then find an island populated by fungus people. Through consumption of the island's mushrooms, the visitors on the island begin to transform too, losing their humanity. The movie is remarkably stark and uncompromising, and even today -- like the first Godzilla -- packs a punch.

In terms of directorial approach, Mr. Honda -- owing perhaps to his early film work in documentaries, --always brought a strong sense of reality to his efforts. His films often feature long, elaborate tracking shots which preserve a sense of space and geography (rather than fracturing it with cuts), and therefore heighten a sense of truth or reality.