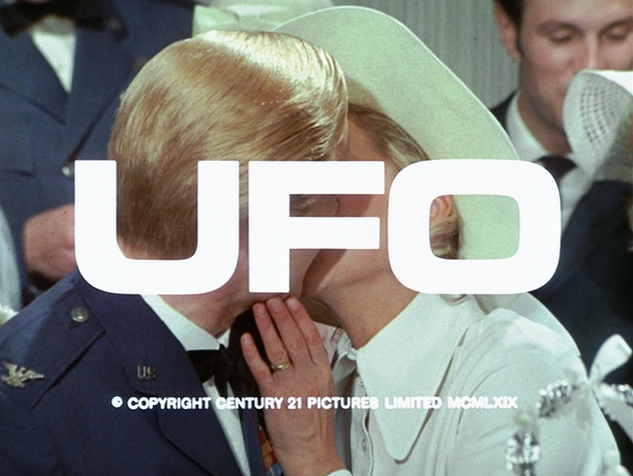 Gerry Anderson’s UFO (1969 – 1970) is a remarkable initiative, in part, because it offers such an unromantic, unglamorous view of Earth’s “secret” war with the aliens.

The program’s lead character is draconian Commander Ed Straker (Ed Bishop), a man who gives and gives, while his mission takes and takes.  Straker is left, finally, a man for whom the “job” has become everything…because every other consideration is sacrificed…lost.

An early episode of the series, “A Question of Priorities” lands Straker in a terrible dilemma.  His son, John is injured when struck by a car.  Straker is in a position to help, but only by utilizing the resources of the war effort; SHADO’s (Supreme Headquarters Alien Defense Organization) resources.

At the last minute, however, an alien incursion on Earth requires the diversion of those very resources, and Straker’s little boy dies.

Many characters in cult-television history are haunted, or grappling with the loss of a child, but I can remember very few programs in which the lead character must endure the death of a child for a broader cause, in this case saving planet Earth.

It’s a dreadful position to be in, and Commander Straker is truly a tortured man, one of the most tragic protagonists imaginable.  UFO is therefore eminently worthy of re-visiting today because of Straker’s journey, and his tragedy.  And, unlike today’s haunted heroes Straker doesn’t act out his grief in angst or brooding.  Rather, he suffers in stony silence. 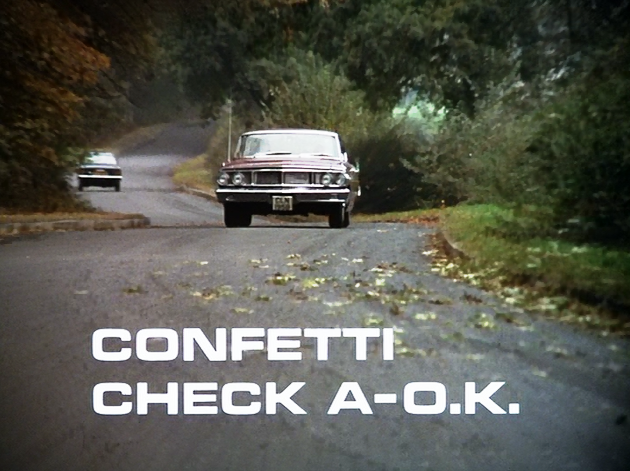 One of the finest episodes of the short-lived series is “Confetti Check A-OK” by Tony Barwick, a flashback tale in which the audience is treated to a view of Ed Straker before he was Commander Straker.  The episode recalls his wedding to Mary (Suzanne Neve), his honeymoon, and the founding of SHADO.

In truth, the episode concerns two births in Ed’s life: John Straker (who is fated to die) and SHADO, which is fated to live.

Again and again, “Confetti Check A-OK” diagrams the contrasts between these births, and Ed’s role in each.

UFO is such an unglamorous series because episodes such as “A Question of Priorities” and “Confetti Check A-OK” both concern a crucial and very unpopular point in western culture.  It’s a point that most TV shows -- designed to entertain -- scrupulously avoid.

Life is limited, certain choices preclude certain possibilities, and no one -- not a soul -- can get everything he or she wants.

Life is all about balancing wants and needs, and “Confetti Check A-OK” concerns Straker’s inability -- because of his responsibilities -- to adequately balance his personal and professional life.

But importantly, Straker’s problem is not one of personal or professional ambition. It’s not about achieving wealth, or gaining power.  Straker’s choice is between leading a happy family life, and fighting the implacable aliens in the way they must be fought.

And even if Straker selected his family over the war effort, would Earth survive long enough for him to enjoy it? 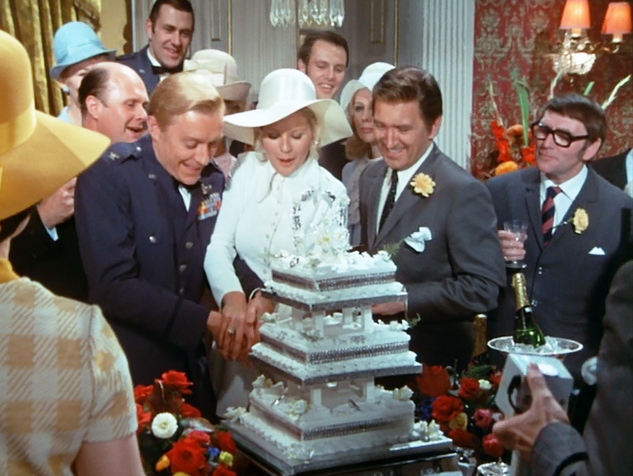 No man is irreplaceable, of course, but it’s clear that Straker has the countenance, the necessary  “bloody-mindedness” to fight the war that it needs to be waged at this point in history.  Another man or woman in his position might not succeed.  At this crucial time, Straker is the (reluctant) warrior the battle requires.

“Confetti Check A-OK” is such an emotionally-wrenching episode of UFO not only because it explores the reasons for Straker’s loneliness -- his status as separate, essentially, from the human race -- but because it shows the audience SHADO’s earliest days.

We meet the first international recruits in the program, see the construction of the underground control center, and even attend the initial meeting with international authorities wherein Straker requests funding to fight the most important war in human history.  We also see Straker’s frustration with the assignment he has drawn. “Sometimes it seems like we’re fighting a ten-headed monster,” he laments.

And fighting a ten-headed monster, alas, leaves little time to be a good husband, or an adequate father.  “Occasionally, just occasionally I’d like to see my husband,” Mary notes with anger.

The tragedy here is that Mary would likely understand Straker’s problem if he just explained the situation to her.  But the war with the aliens is top secret, and Straker feels that to inform Mary is not only a breach of protocol, but an act that could seriously endanger her life.

“Break the rule for once,” Mary implores, but Straker can’t do it. He will not bend, but he breaks his marriage.

Even when Mary suspects that Straker is having an extra-marital affair, he can’t tell her the truth.  He can’t defend himself, or his behavior.  All he can do is watch his marriage -- and his family -- slip away.

And, with clenched jaw and piercing eyes, that’s exactly what he does.  Straker confides in no one about his pain.  He suffers alone, in silence.

In the wraparound scenes of “Confetti Check A-OK,” which take place in the present, Straker, acting as a good leader, attempts to assure that no one else in SHADO will have to contend with his personal demons.   A SHADO worker has just had a baby, and Straker immediately orders the man on leave.

Then, the episode ends with Straker sitting alone -- forever alone -- in his office.

There are a number of genuinely great episodes of UFO, including “Timelash,” “Mindbender” and “A Question of Priorities,” but for my money, the title of best episode must go to “Confetti Check A-OK.”

This episode reveals the man behind the Nehru jacket and punk haircut, and gives us precious insight into Straker’s character.

The power of this UFO episode is such that, even with relatively few stories focusing on the characters, one feels intense sympathy for Straker throughout all 26 episodes.  He’s been through the wringer and given up everything to save the Earth.

But no one in his life (outside the war) knows what a self-less hero he is.

I have always believed that UFO is a science-fiction series about one thing: cost.

Several episodes deal with the monetary cost of fighting a covert war against technologically superior foes.

But some episodes -- such as “A Question of Priorities” and “Confetti Check A-OK” -- contend with the human, personal cost of fighting that war.

We see that cost written on Straker’s face here, as well as in other episodes, and that silent but ubiquitous pain is part of what makes him a great character in the sci-fi Valhalla, and a key element of what makes UFO a great series, even forty plus years later.

The other key element and perhaps the quality that keeps drawing me back to UFO is the feature film-quality cinematography of the series.  “Confetti Check A-OK” demonstrates this quality in spades.

At one point, Straker is seen separated from his family in his house.

Between Straker and the camera is a white window frame (the visual equivalent of bars or a barrier…), and beyond the window is pounding rain. 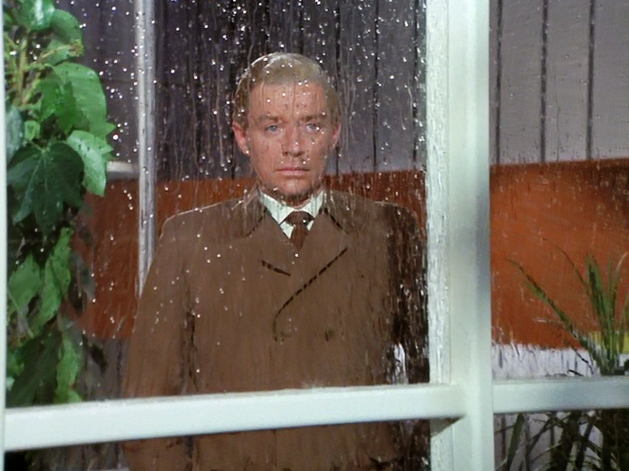 So we see Straker behind two “barriers,” the rain and the window-frame, and thus get the distinct sense of his isolation from those he loves.  Also, he is a man who keeps his emotions close to the vest, and would never be seen “crying.”  In this case, the rain does the crying for Straker; representing his interior emotional state.

Similarly, one of the episode’s closing shots reveals Straker in his office -- alone -- smoking a cigar.  The shot is a long one…from a perch outside his office door.  This composition suggests a final, irrevocable distance from the man.  He has no one to share space with and everyone, even “friends” like Alec, view him from this distance. They may catch a glimpse of "who" Straker is, but they must look beyond the door frame, and a wall-support. 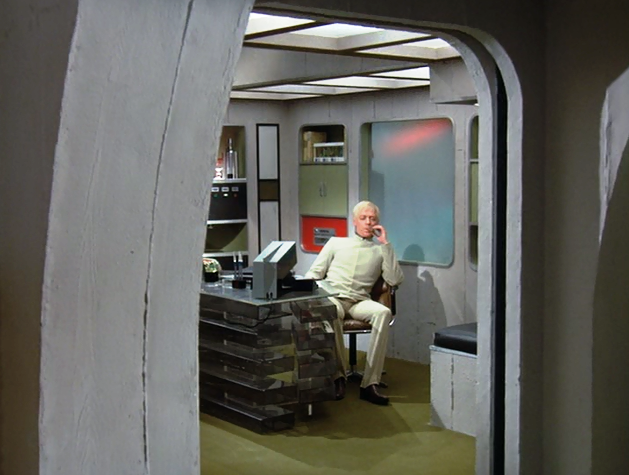 At long last, the camera moves in -- perhaps because Straker is alone and unobserved by the other characters -- and the audience is afforded a close-up look of his sad, lonely face. 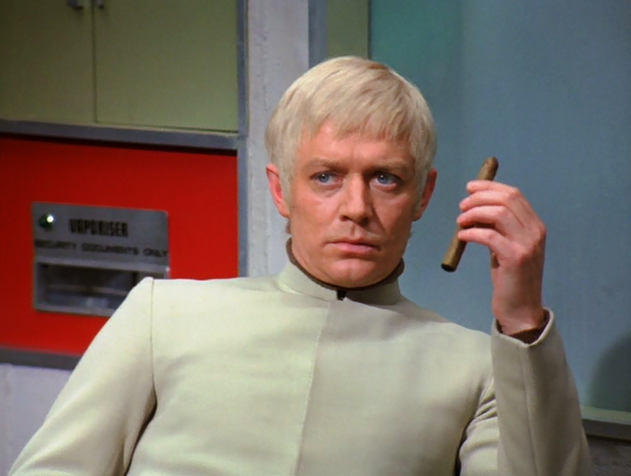