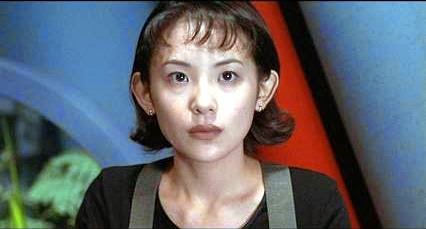 There are relatively few returning human characters in the long-lived Godzilla saga, but one character did appear regularly throughout the Heisei Era: the resourceful Miki Saegusa, played by Megumi Odaka.

Miki, who has been both a military office and a teacher of other young psychics, seems to live a cursed existence ,much like the mythical Cassandra in that she alone among her peers seems to care for Godzilla, and yet is always asked by those very peers to use her psionic abilities to lead him into destruction. 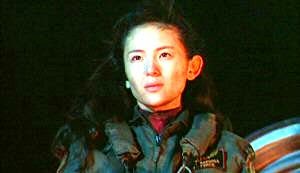 In Godzilla vs. Mecha-Godzilla II, for example, Miki is used by the military to target Godzilla’s second brain, and destroy it. She does so, but Fire Rodan revives Godzilla and its energy repairs his secondary nerve bundle or brain.

In Godzilla vs. SpaceGodzilla, Miki is asked to deploy a transponder that will allow her to use psychic powers to direct Godzilla’s behavior.  She complies with orders (as she always does), but when SpaceGodzilla is destroyed, she frees Godzilla from the implant and sends him on his way.  It is clear that, after a fashion, Miki loves the monster.

Finally, history repeats itself in the most awful of ways in Godzilla vs. Destroyah. Here, Miki is asked to telepathically direct Little Godzilla or “Baby” to Destroyah’s location.

Though the baby will certainly be killed by the berserker, Godzilla will follow his son, and engage the enemy, thus saving the human race in the process.  Clearly, Miki dislikes being used in such fashion,
but again, does what she must…with catastrophic impact on Godzilla’s family.

In Godzilla vs. Destoroyah -- Miki’s last appearance -- she confessed that her psychic abilities and psychic connection to Godzilla and Little Godzilla were waning.
at May 13, 2014