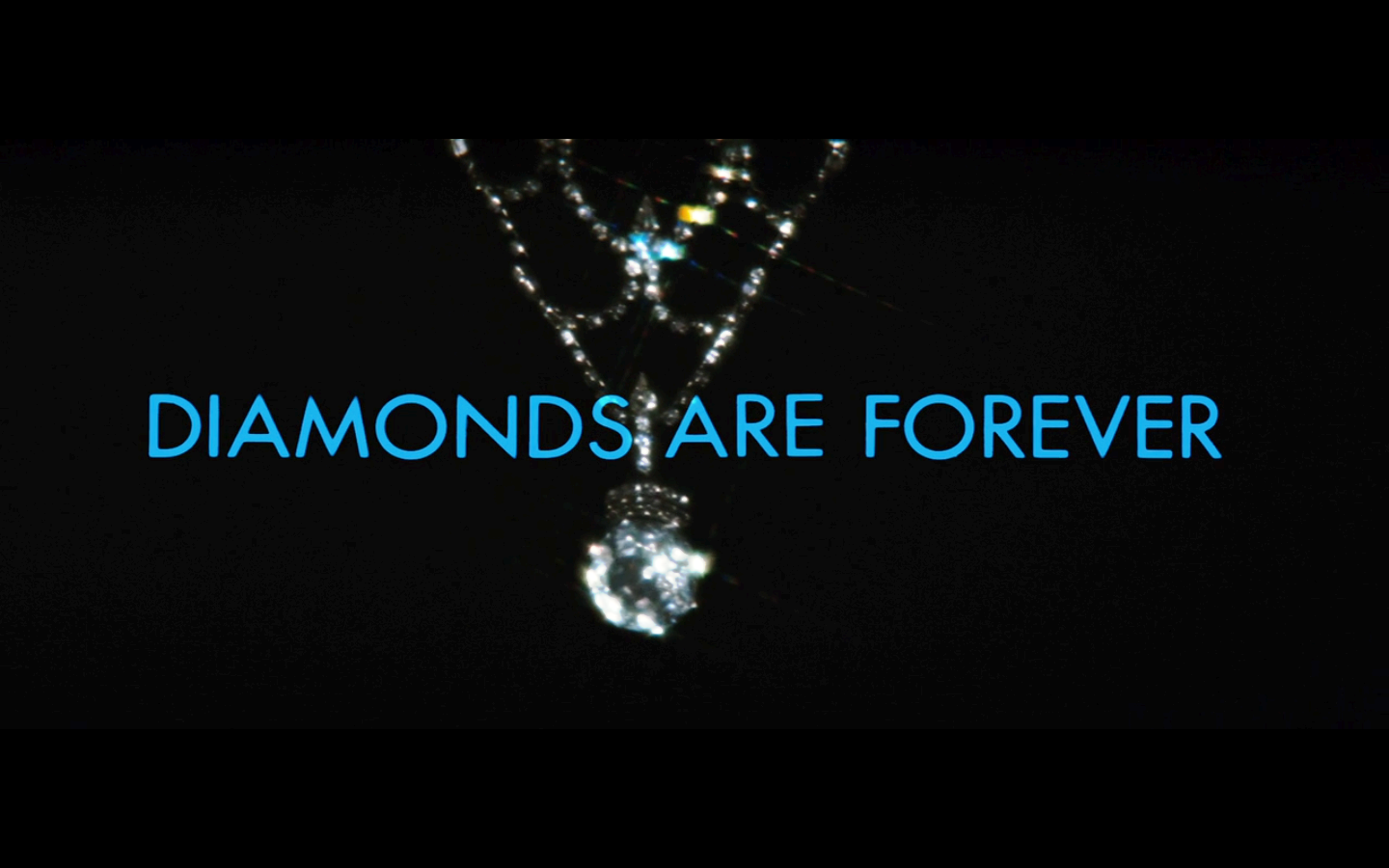 Variety commented succinctly on Diamonds are Forever (1971) -- the last “canon” 007 movie to star Sean Connery-- when a reviewer for the periodical wrote that the entry didn’t “carry the same quality or flair as its many predecessors.”

Christopher Bray, author of a Connery biography, was even more direct when he called the film “as big a bunch of junk as the Bond producers ever threw together…

In short, this 7th Bond film is tedious and overlong, its narrative is confusing, and the underwhelming American settings -- in Las Vegas -- give the film the appearance of a bad, cheesy TV series of the era.

On top of these problems, Connery looks terrible -- overweight and under-groomed -- and seems bored with the proceedings.  Diamonds are Forever also lapses into high-camp with the presence of two hired killers who *might* be gay: Mr. Wint and Mr. Kidd.

The Roger Moore Era that followed Diamonds are Forever had its own issues to contend with, of course, but Connery’s last outing is undeniably a low-point in the franchise, one equaled only by two other dreadful “last” acts: Moore’s A View to A Kill (1985) and Brosnan’s Die Another Day (2002). 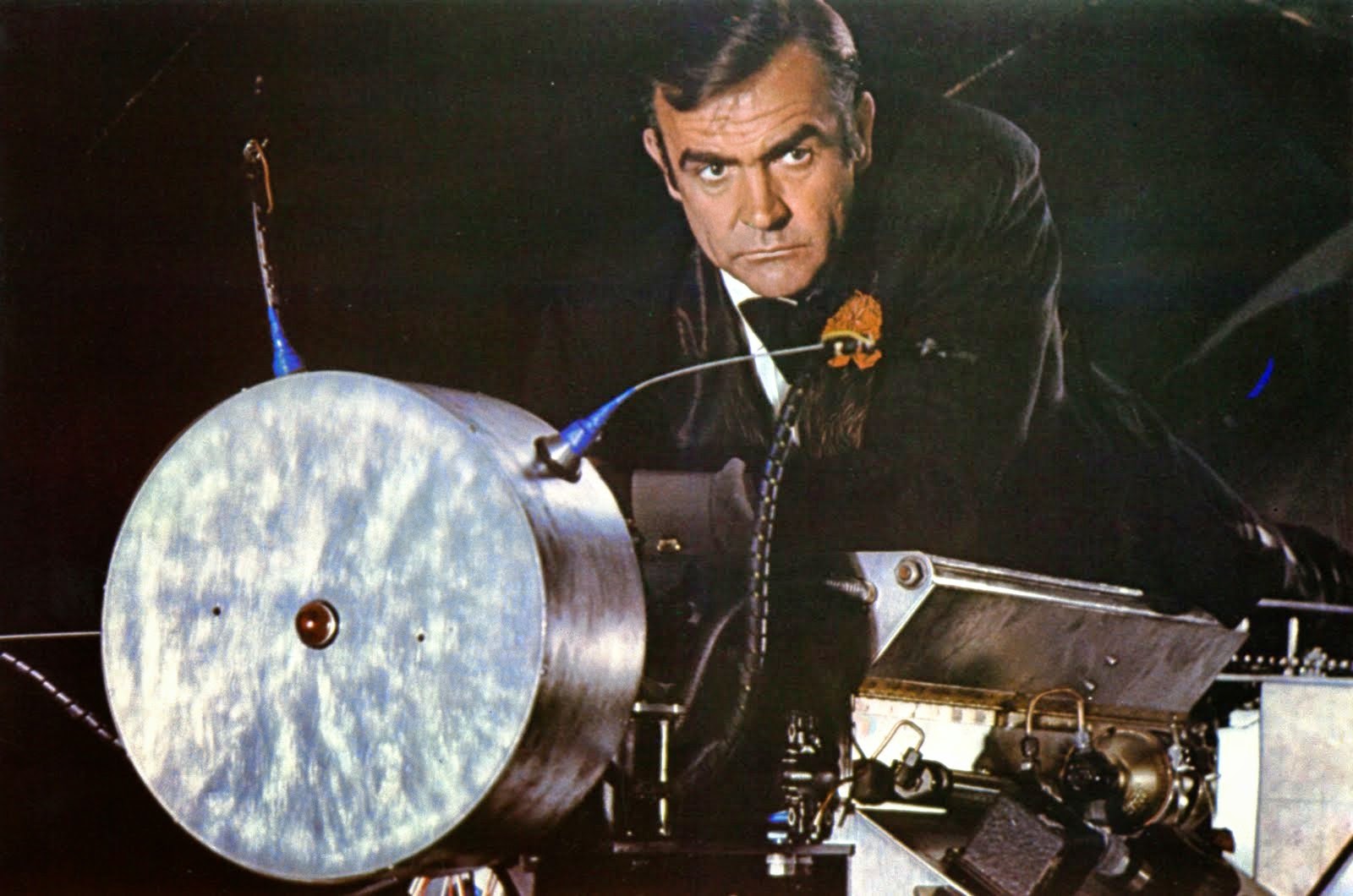 James Bond (Connery), Agent 007, scours the globe for his arch-enemy, S.P.E.C.T.R.E.’s Blofeld (Charles Gray), and when he finds him, kills him with glee.  Or so he believes.

Sometime later Bond is assigned to a case by his superior at the secret service, M (Lee) that involves a diamond smuggling ring.  The investigation takes Bond to Amsterdam, where he meets a beautiful smuggler Tiffany Case (St. John).  Bond impersonates another smuggler, Peter Franks, to get close to her.

Through an elaborate series of connections, however, Bond soon learns that the diamonds are actually connected to the reclusive American millionaire Willard Whyte (Dean), who lives in a penthouse in Las Vegas.

Bond then discovers that the real Willard Whyte is being held captive, and that Blofeld -- having created multiple decoy duplicates of himself including the one Bond killed -- is impersonating the tycoon so as to misuse his fortune.

Blofeld’s new plan is to utilize a diamond-ringed, laser-equipped satellite to blackmail the world.  Bond pursues Blofeld to his new headquarters, on an oil rig at sea, and with Tiffany’s bumbling help, attempts to stop Blofeld once and for all. 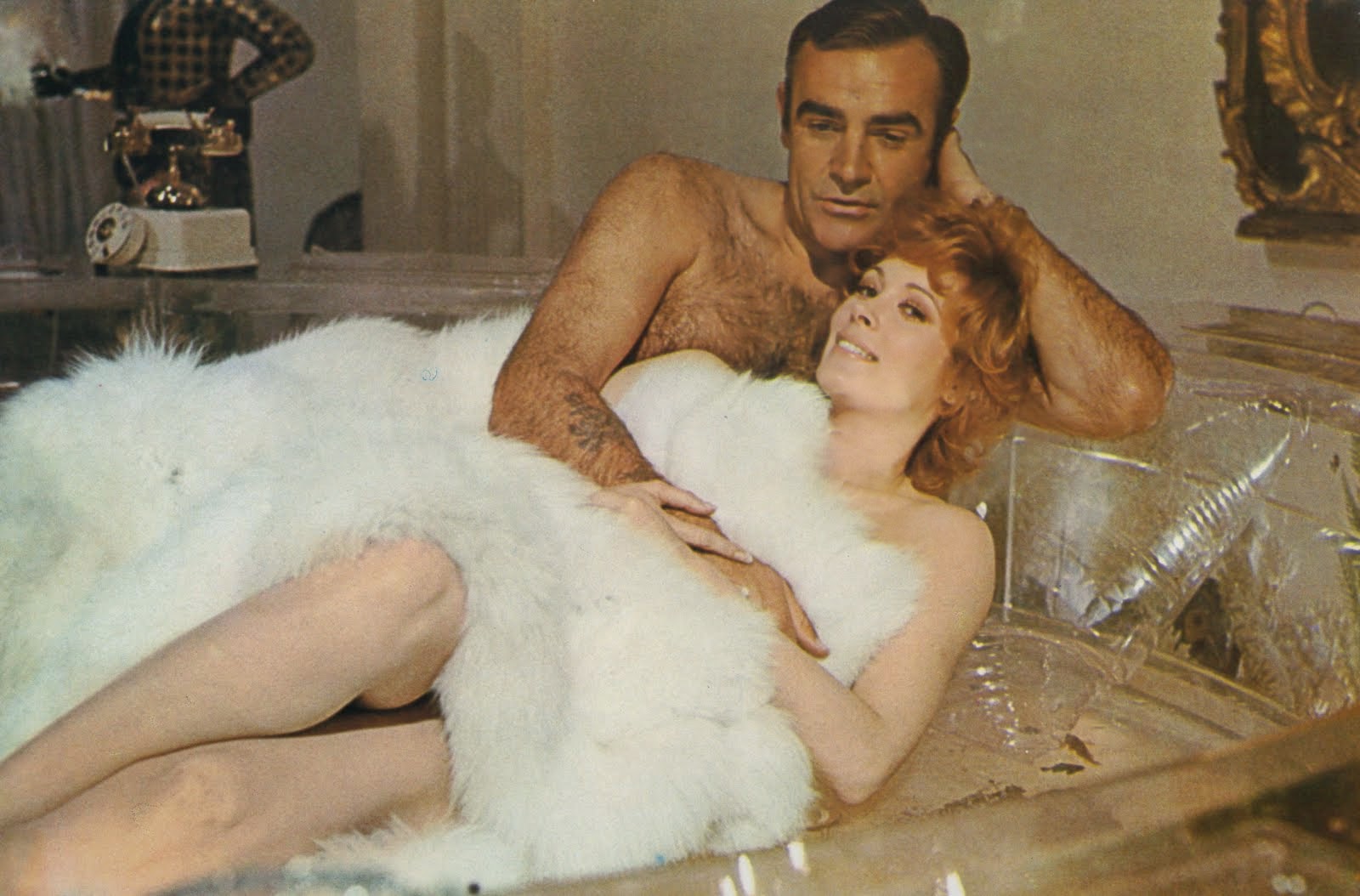 Bloated, overlong, and edited with a feeling of lassitude and resignation, Diamonds Are Forever marks James Bond uninspiring entrance into the 1970s, and Sean Connery’s last turn in the iconic role until 1983’s Never Say Never Again.

Meandering and labyrinthine, the film suffers from its steadfast refusal to clarify some important points about James Bond’s mission this time around.

Specifically, in On Her Majesty’s Secret Service (1969) starring George Lazenby as James Bond, Blofeld (Telly Savalas at that point…) killed Bond’s new wife, Tracy (Diana Rigg) in cold blood. He did it on Bond’s wedding night.

Accordingly, Diamonds Are Forever commences with Bond searching the world for Blofeld, attempting to murder him.

Yet Bond never makes any explicit connection -- or any mention whatsoever -- of the events of On Her Majesty’s Secret Service.   In other words, the film’s writers expect the audience to make the connection, without making the connection themselves.  This way, economically, the film works both for those who did and did not see the Connery-less previous film in the franchise.

For example, Bond never says anything here like “this is for Tracy” or something like that.  He could be pursuing Blofeld so assiduously for any reason whatsoever. Perhaps he’s just tired of pursuing the super-villain.

Is On Her Majesty’s Secret Service being ignored and treated as non-canon?

Are audiences indeed just supposed “to know” why Bond is angry?

Certainly, one would think that in one of Bond’s multiple confrontations with Blofeld in this film, he might mention Tracy by name, or exhibit some kind of personal hatred for Blofeld over the killing of his wife, but it doesn’t really happen.

In fact, Bond kills Blofeld (he thinks…) in a mud-bath in the film’s pre-title sequence and then just quips merrily like its old times as the opening song begins.

Additionally, Sean Connery looks unkempt, overweight, and bored as hell as James Bond in Diamonds are Forever, and is barely able to muster interest in the convoluted, over-complicated plot-line about stolen diamonds being used as components in a deadly satellite.

On top of that, the climactic battle, set atop a real life oil rig, is a debacle from a visual and narrative standpoint.

The rig doesn’t crash down into the sea, or explode into shrapnel in the end.  Instead plumes of fire shoot up into the air obligingly, in pre-selected spots.  Had a miniature been used instead of a real-life rig, the whole thing could have been brought down into the sea with a bit more aplomb.  As it stands, this is one of the most uninspiring final battles in all the Bond series.

As for Blofeld, Bond shakes him around in his submersible by a crane – an ignominious situation for the villain -- but there is no discernible sense of Blofeld being killed or defeated, or Bond’s revenge quest coming to a meaningful end.

Indeed Blofeld -- unnamed as such -- shows up alive in 1981’s For Your Eyes Only, but at least that film has the decency to name-check Tracy (on her tombstone) on the anniversary of her death.  At least there, we understand why Bond is after revenge. 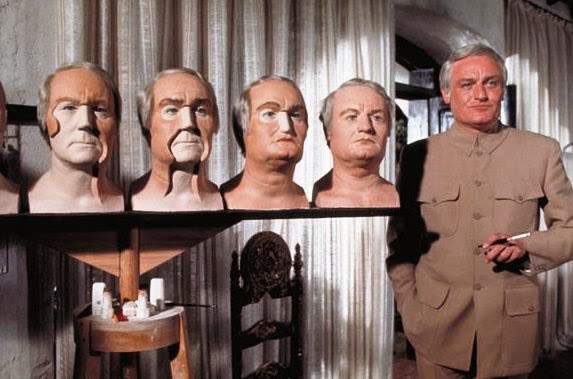 Finally, one last note involving Blofeld: Charles Gray plays the least satisfactory, least-menacing version of the character ever seen.  Donald Pleasence remains the best, in my opinion, though I also like Savalas’s more brutish rendition of the villain.

The science fiction aspects of Diamonds are Forever involve the aforementioned satellite and its death ray capability.  Accordingly, one of the most enjoyable aspects of the film finds Bond infiltrating Willard Whyte’s subterranean space program facility, wandering onto a recreation of the lunar surface, and then stealing a lunar buggy for an extended chase across the desert. The chase scene is undeniably fun, if not exactly exciting, but even in this enjoyable sequence there are questions to be asked.

Like: why do men in space suits move around in slow motion on the mock lunar surface, even though it is just a training exercise? 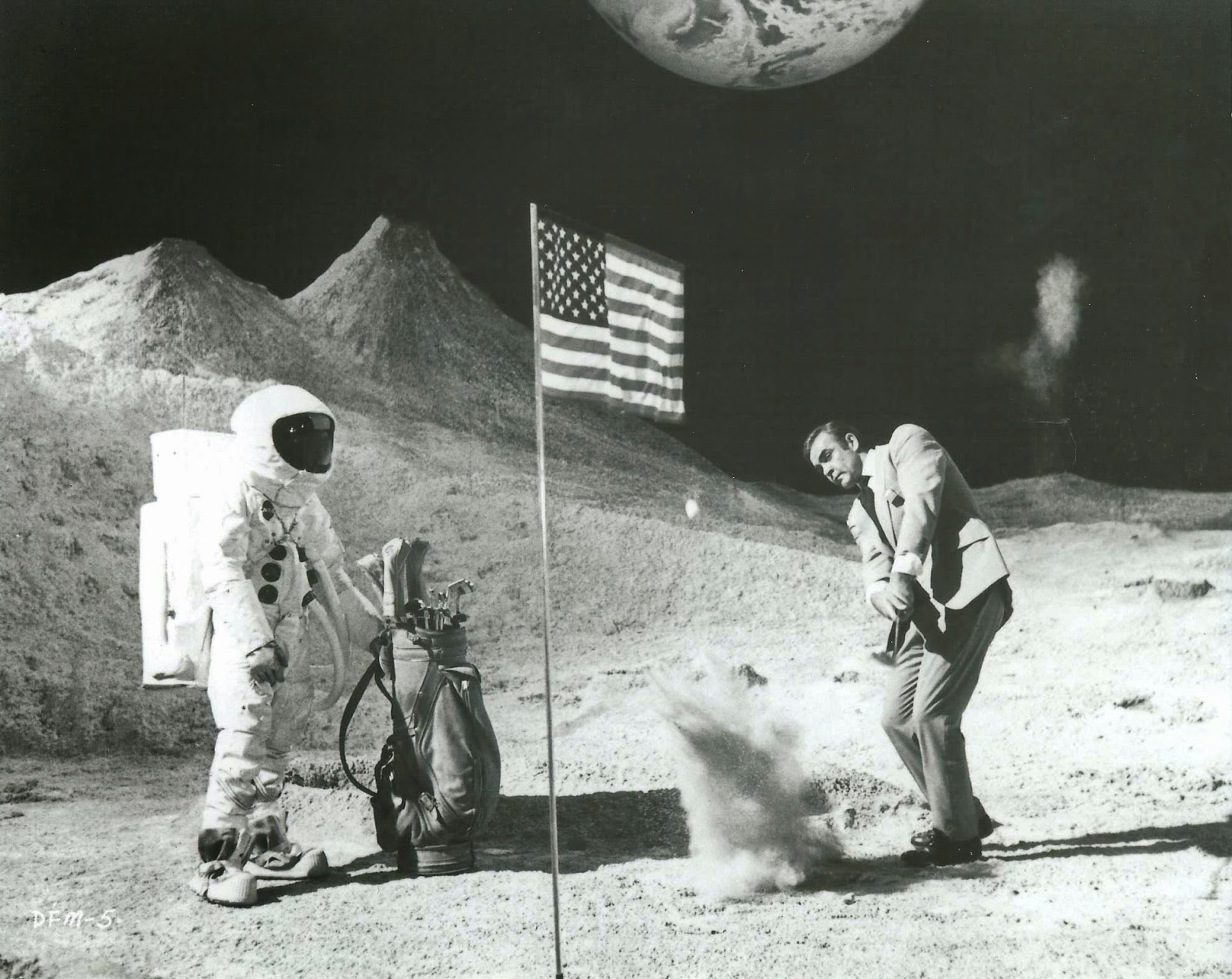 Still, I must give Diamonds are Forever its due. Outside of the space age plot, this Bond film also features one of the best fight sequences in the entire Bond cycle.

Specifically, 007 goes up against jewel smuggler Peter Franks (Joe Robinson) in an extremely tight setting: a cramped elevator compartment.  The setting is so tight, actually, that almost each time a character pulls back to deliver a punch, an elbow shatters glass on the windows or hits a button, accidentally making the doors open and close, and the elevator rise and fall.

This unpredictable fight scene features broken light bulbs and shattered glass panes, and at one point Franks picks up a shard of jagged glass and attempts to stab Bond with it.  There isn’t a lot of quick cutting during this scene or much change in camera position or angle, just two men --  Connery and Robinson (and their stunt-men no doubt) -- slugging it out brutally, sometimes for long stretches.

This is one of the meanest, most down-and-dirty hand-to-hand grudge matches in the long-lived franchise, and one of the best.  I wish it had come to the screen in a better film.

A fight like this belongs in a much better Bond film, and is an out-of-step high-point in what seems a listless and life-less entry.
at May 30, 2014