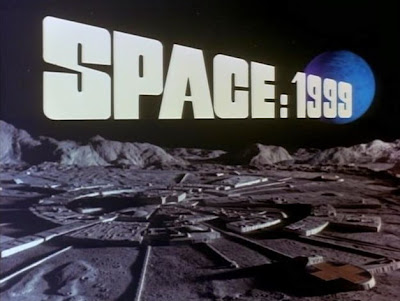 "...Space:1999 is like Star Trek shot full of methedrine.  It is the most flashy, gorgeous sci-fi trip ever to appear on TV.  Watching it each week is very close to being under the influence of a consciousness altering drug. - Benjamin Stein. The Wall Street Journal: "Sailing Along on a Moon-Base Way." 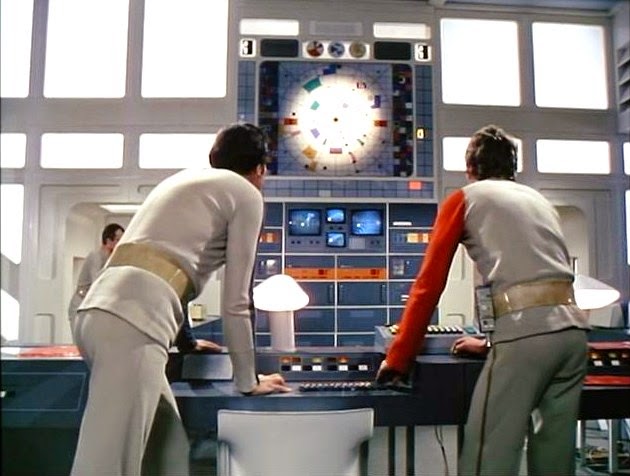 Okay. It didn't quite turn out that way, but you can't convince me that it shouldn't have turned out that way. The sets  for Space: 1999 were created by production designer Keith Wilson, and the exterior miniatures by special effects director Brian Johnson. In both cases, these gentlemen did extraordinary work.  In short, they accomplished three critical things: 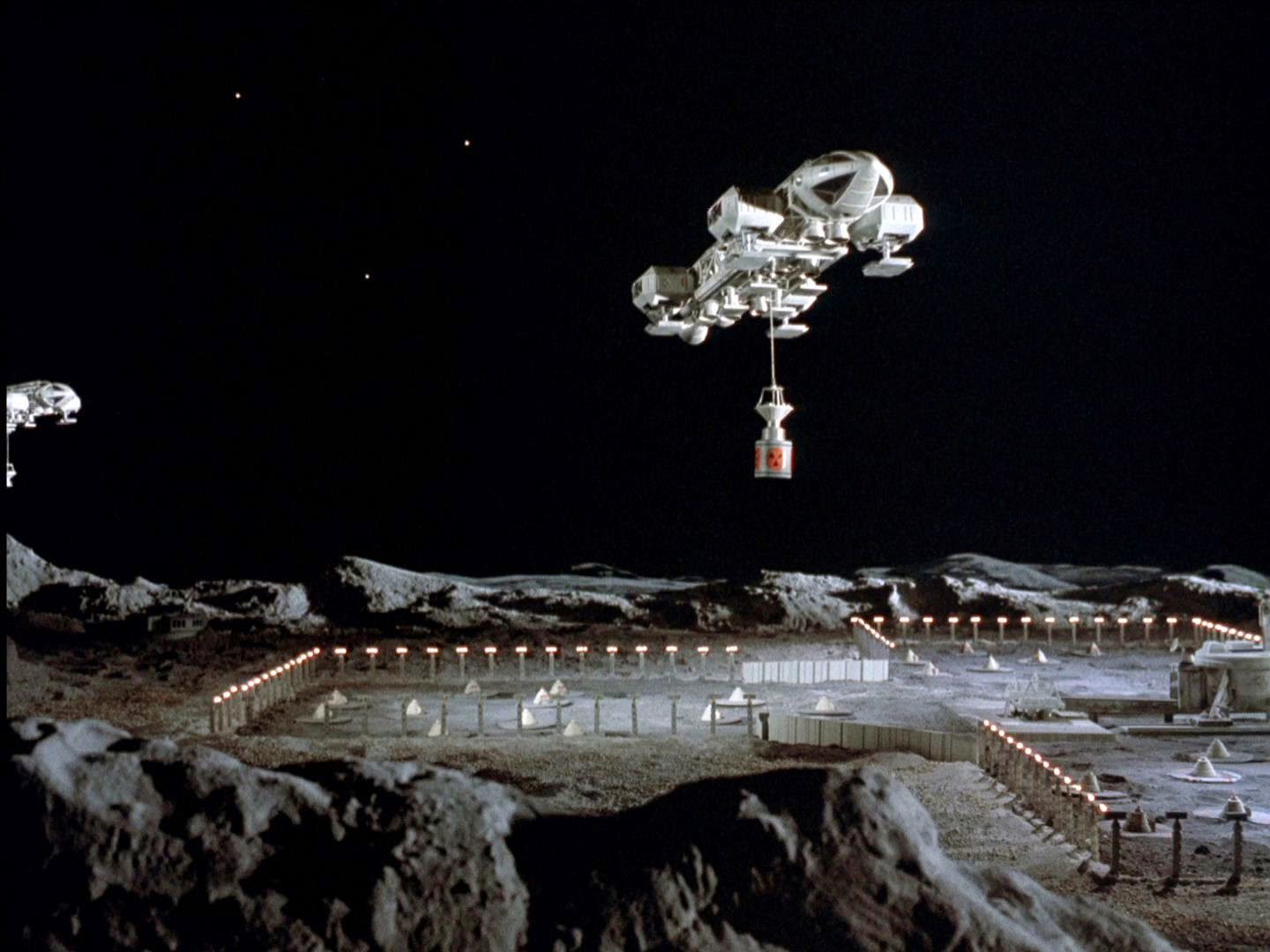 In practice, this is quite an extraordinary combination.  Despite the clean, minimal lines of Moonbase Alpha construction, crew quarters boast a sense of individuality and recognizable humanity ("Matter of Life and Death."), Areas of heavy use such as laboratories, as seen in "Breakaway" and "Voyager's Return," are cluttered and over-crowded.  In other words -- despite the immaculate white conception of Moonbase Alpha -- man will be man, even in the future. He will use the "space" on the Moon in just the way he does here on Earth; and that way isn't always clean and austere...or even neat.  Victor Bergman's laboratory is another example of this design approach. 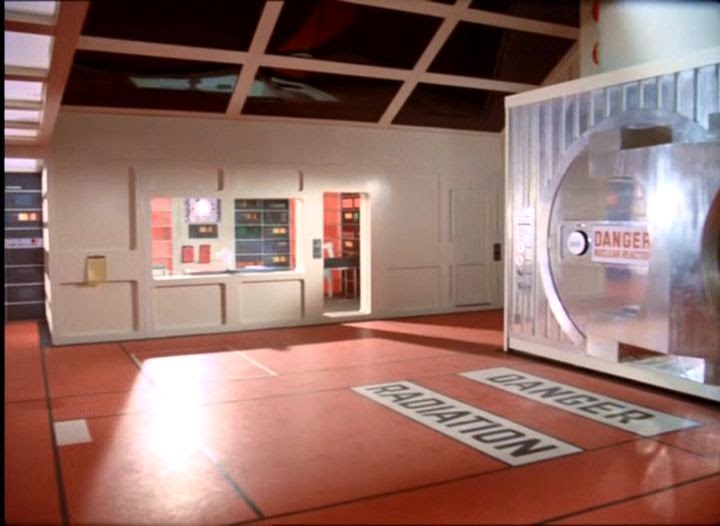 The control center of Moonbase Alpha, Main Mission, is a perfect example of this aesthetic.  It is a vast, two-story affair replete with a ledge and observation area, as well as a kind of mission control pit where analysts toil on a regular basis.  Attached to Main Mission -- with a wall as a huge sliding door -- is the Commander's office.  For privacy, Commander Koenig can shut the door to Main Mission.  In cases of emergency, he can open the door, and his desk overlooks the Big Screen and his workers.

What must be noted about this is that both Main Mission and the Commander's office are vast.   The two (joined) sets present the appearance of a real life, sprawling complex. 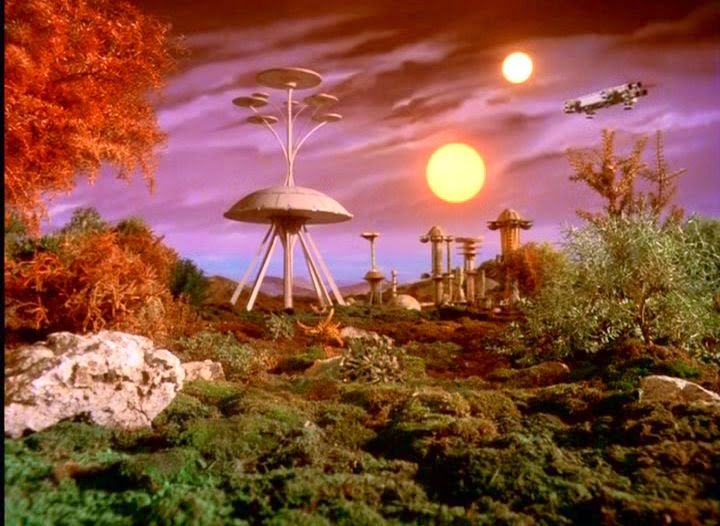 Week after week, our impressive views of Earth's high-tech turn-of-the-century moonbase were one-upped, essentially, by mind-blowing alien landscapes and worlds,  as featured in episodes such as "Guardian of Piri," "Missing Link," "War Games," "The Last Enemy" and so on.

It would be impossible to write this post without commenting just a little on the Eagle, one of the most beloved spaceship designs of cult-televisions. These craft are perfectly in keeping with Moonbase Alpha: as remarkable embodiment of "near future" technology. No flying saucers or stream-lined nacelles in this world.  Rather, the utilitarian Eagles consist of interconnected modules, retro-rockets, landing pads and nose-cones.  All these facets are recognizable as dramatic extrapolations from the then-current Apollo program.  Again, Space:1999 had one foot in the future, and one in the present.

This is how Brian Johnson described the creation of the Eagles, in an interview with me almost a decade ago (on the advent of Space:1999's release on DVD):