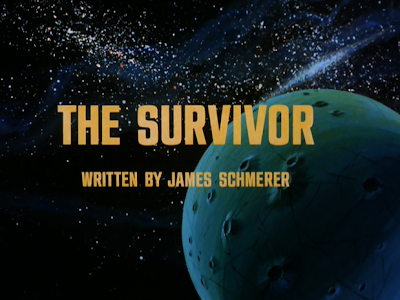 Stardate 5143.3: The Enterprise is near the Romulan Neutral Zone when it assists a damaged one-man vessel.  One crew person is recovered from the ship: the long-missing philanthropist and “living legend,” Carter Winston.  Winston has been missing for five years, and presumed dead, but his fiancé Anne serves aboard the Enterprise as a security officer.  She is thrilled to learn he is still alive.

Not long after Carter Winston boards the Enterprise, however, he breaks up with Anne, and sabotages the ship.

In truth, he is an alien known as a Vendorian, a shape-shifter who can “re-arrange his molecular structure” and who practices “deceit as a way of life.”  This particular Vendorian is also a Romulan spy, but by taking on Carter Winston’s form, he has also begun to take on some of the philanthropist’s emotions and personality… 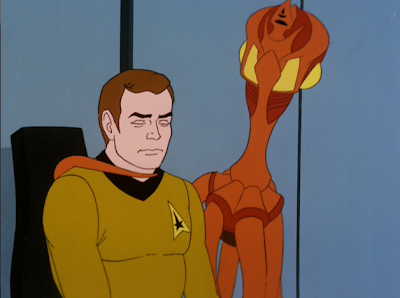 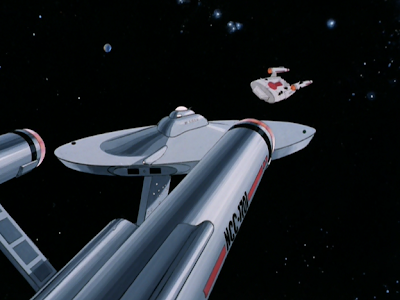 This episode of Star Trek: The Animated Series (1973 – 1974) is so good, so mature in terms of its storyline and characterizations that you almost forget it is a cartoon.   Indeed, this installment looks, feels and plays like “real” Star Trek.

In particular, “The Survivor” asks the viewer to reckon with the grown-up idea that “form isn’t terribly important” when it comes to love.  Today, our culture is still learning in this idea, in terms of the type of partnerships it finds acceptable, but as usual, Star Trek – in episodes such as “The Survivor” and “Metamorphosis” -- proves itself ahead of the curve.  Here, Anne (voiced by Nichelle Nichols) realizes that something of the man she loves survives in the Vendorian, and decides that she can love him despite his alien origin and nature. 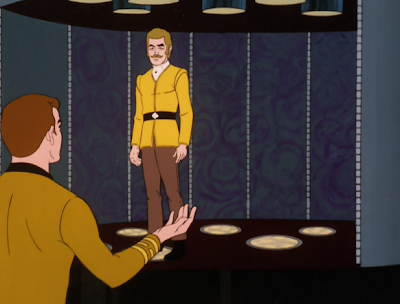 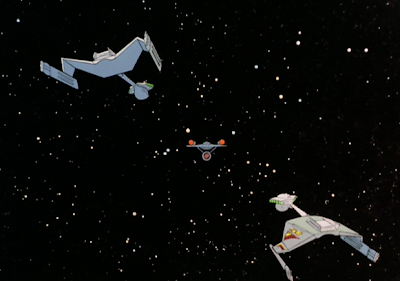 The alien also arrives at an interesting conclusion about his life.  On his world, he says, he was a “non-producer” and “useless.”  He undertook espionage work for the Romulans so he could do “something of value.”  After experiencing human emotions towards Anne – after knowing what it means to actually live as a human -- he realizes that producing or doing something of value may not be as important as honoring love, and feelings.  Again, that’s an incredibly Star Trek-kian message. 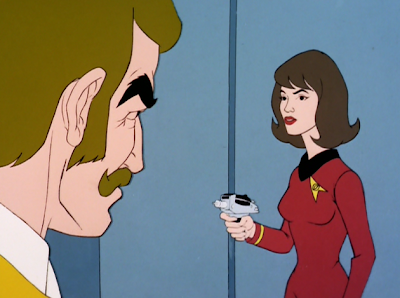 I should also add, this episode follows up brilliantly on “The Lorelei Signal” by featuring a female security guard as a central character.  Science fiction television, in particular, has often been slow to allow its female characters to operate outside the traditional “caretaker” role.   But Star Trek: The Animated Series blazes trails in this regard, noting that women can function, and function well in dangerous assignments.  One could make the argument that this episode is really about Anne: about her conflict between duty and personal life, and her decision to love a man who embodies all she misses so deeply in Carter.

“The Survivor” is such a strong episode in terms of its themes and characters that the sequence involving the Romulans and their attempt to capture the Enterprise hardly seems entirely necessary.  One wonders why the Romulans would violate a peace treaty and use a Vendorian when it is so easy to prove his involvement.


Beyond these minor problems, “The Survivor” proves how ably Star Trek: The Animated Series dramatizes adult stories about important qualities of life.  In this episode, an alien hiding in human form finds that humanity isn’t a disguise, but a way of being.  It’s a really good, really original show, especially after last week’s unnecessary tribble re-hash.
at September 05, 2019