When I was a kid, the only way to play with replicas of your favorite starship (besides Dinky die cast metal ships...) was to build a model kit.

As far back as 1966, the year the series premiered on NBC, AMT (later AMT/ERTL) committed to producing a highly-detailed line of vessels and in one case, a figurine, from Gene Roddenberry's classic adventure. Fortunately, my father is a great model builder and he stepped in where his son would only make a mess.

Among my favorite kits from AMT was the Exploration Kit, which featured the equipment trifecta: a Starfleet phaser, tricorder and communicator.

I remember my Dad built this kit for me, let it glue overnight, and left it outside my room for Saturday morning play time. I awoke eager and happy, slung the tricorder over my shoulder, clipped on the communicator, gripped my phaser and "beamed" down to the wooded trails near my house for a new adventure. This was after an episode of Star Trek: The Animated Series had aired on CBS that morning.

In 1980, during the winter Olympics at Lake Placid, I grew ill for a long period of time -- we didn't know it then, but my sickness was actually carbon monoxide poisoning resulting from a malfunctioning furnace in our old house -- and I passed the time (with a terrible, unending headache...) with a model of the starship U.S.S. Enterprise that my father built for me.

I was ten years old at the time, and still able to escape into adventures with that starship. In particular, I remember flying it in orbit around the globe I had stationed on my desk in my room.

Over the years, AMT released a number of kits from the original series, including a Romulan Bird of Prey (replete with Romulan logo on the bottom...), a Klingon D-7 battle-cruiser (as featured in the third season shows...), and even K-7, the space station featured in "The Trouble with Tribbles." 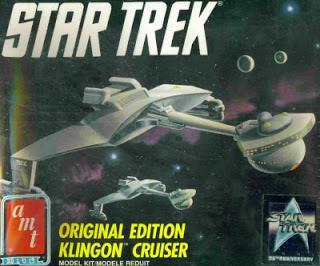 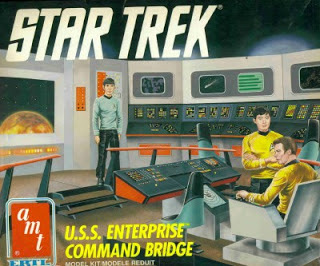 There was also a Mr. Spock figurine, one that depicted the logical first officer encountering a three headed dragon on a planet's surface. I had all of these kits, and my favorite - the "interplanetary" UFO. Now, this vessel was not actually from the series itself, just a random alien ship to encounter, but I loved that fact. It was a way to create a new adventure, to have the Enterprise "meet" a new alien, neither Klingon nor Romulan. I played these models out.

Other kits included the shuttlecraft, Galileo 7, and a diorama of the Enterprise bridge. I remember my father meticulously painting the chairs, banister, deck and characters of the latter. The set came with Captain Kirk (seated, for his command chair), Mr. Sulu and Mr. Spock. I always wondered why no Scotty, Uhura or Chekov. The bridge seemed like a "house with all the children gone," with just three officers on deck.

In the year 1979, Star Trek: The Motion Picture arrived in theaters, and AMT released a deluxe kit of the new version of NCC-1701, replete with 'rainbow" decals for "warp speed" effect. This model was larger than the series' editions, incredibly detailed and absolutely gorgeous. It was wired with lights, and made quite the impressive statement. 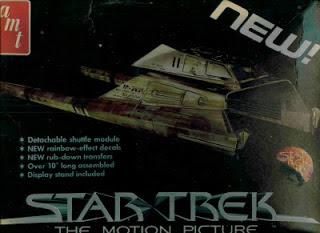 At the same time, another Spock figurine was released (this time he was gripping a tricorder, not a phaser, and gazing at alien fauna, not a monster..), and two other ships: the Klingon K'Tinga cruiser (trashed by V'Ger in the film...) and the Vulcan shuttle. I loved the Vulcan shuttle because it could split into two vehicles for docking: the warp sled and the crew compartment.

Over the years, there were many new editions of these classic models. The first significant change in the Enterprise itself came in 1989, for Star Trek V: The Final Frontier, when the model kit was modified to include the shuttlecraft Kirk and party used to raid Nimbus III. Remember "Emergency Landing Plan B?" I thought this was a particularly cool addition to the kit. I was in college when the movie came out (and I dutifully saw it six times in the theater...), and I built the model myself. I still have that tiny shuttle in my home office here.

By the time of Voyager in 1995, I was a happily married adult and AMT/ERTL no longer had the license to Star Trek.

It migrated to Monogram at that time, and an era was over. Still, for almost thirty years, AMT and AMT/ERTL were responsible for creating some really beautiful Trek kits. And as a kid, I loved playing with them, and going -- along with Kirk and Company -- where no man - where no kid - had gone before.
at September 03, 2019