Captain Jean-Luc Picard (Patrick Stewart) is over-worked and over-stressed, preparing to vocalize an important greeting to the powerful -- and perfectionist -- insect race known as the Jarada.

One mispronounced syllable in his oratory could spark an interstellar incident. Indeed, such a mishap has occurred in the past.

Counselor Deanna Troi (Marina Sirtis) suggests that the Captain should relax for a while, to relieve the pressure. Picard acquiesces and visits the holodeck to participate in a holo-novel based on the 1940s private detective, Dixon Hill.  There, he can participate in a Dixon Hill “mystery.”

After a brief visit to the holodeck, Captain Picard returns to tell his command crew about the vivid experience. Lt. Commander Data (Brent Spiner), Dr. Beverly Crusher (Gates McFadden) and ship’s historian Whalen (David Selburg) go into the adventure/mystery too, all appropriately dressed to the time period.

A scan from the approaching Jarada, however, causes a malfunction on the holodeck, trapping the Captain and the others inside, and terminating the safety protocols. Now, their lives are actually in danger from a 1940’s ganger Cyrus Redblock (Lawrence Tierney).

Captain Picard must outmaneuver this nemesis, escape from the holodeck, and deliver a pitch-perfect oratory in time for the looming rendezvous. 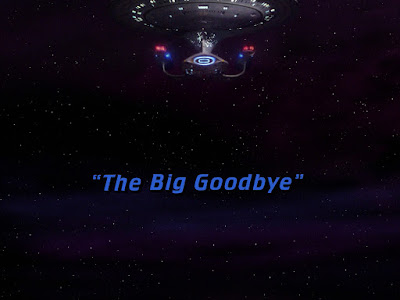 No complaints from me this week.

“The Big Goodbye” is an unequivocally strong and successful episode of Star Trek: The Next Generation (1987 – 1994). The episode won a Peabody Award in 1987, and an Emmy for Best Costume Design as well.

More importantly, for our purposes, “The Big Goodbye” is funny and charming, and in its finale, it actually proves touching and thought-provoking.  The subplot featured also begins a theme or in-universe “thread” that is carried all the way through the franchise, into Star Trek: Voyager (1995 – 2001). That thread, of course, involves the nature of “photonic” life forms, or holograms.

Are they programs, or are they sentient? Do they have souls? Here, we see the first exploration of that notion.

But before “The Big Goodbye” reaches that point, the performers and writer, Tracy Torme, have a ball playing up “the fish out of water” dynamic that made the recent Star Trek: IV: The Voyage Home (1986) such a hit at the box office. There, as you recall, Kirk and his crew had trouble adjusting to 1980’s San Francisco, and the results were often hilarious as they attempted to “blend in.”

Here, The Next Generation cast not only gets to dress up in film noir gear, but play the humor straight-faced, as the characters fail to understand all the nuances of this 20th century era. 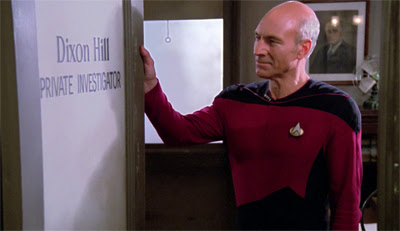 Some of the funniest and most romantic moments in the episode involve the often-underutilized Dr. Crusher. Here, she gets to sample chewing-gum (!), and ask – naively -- when Picard is hauled into the police station, why everyone isn’t being interrogated. She wants in on the fun.

Another great moment involving her character sees Captain Picard and Crusher first meeting in the Dixon Hill universe, and in romantic close-up framing to boot. Here, Jean-Luc notes that Crusher wears the clothes of the era “well.”

And indeed she does. 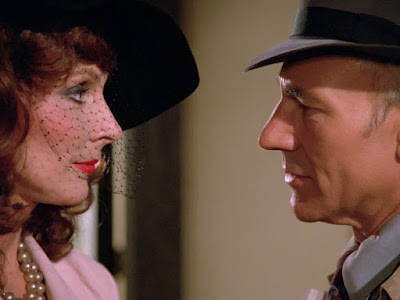 This is the kind of genuine, compelling character chemistry that the series often lacked in its earliest days. Also a lot of fun in “The Big Goodbye” are the jokes about Data hailing from “South America” (due to his unusual complexion), and Worf having difficulty pronouncing the word “automobile.”

There’s even some self-reflexive humor here involving television.  Data notes that the format of television, for instance, has an expiration date in our near future.

“The Big Goodbye” succeeds, however, not merely because it is funny, but because it ultimately proves to be a meaningful story about mortality, and what it means. One of the holograms in the Dixon Hill story, a police detective named Lt. McNary (Gary Armagnac) learns the truth about his identity, and confronts Picard about it. He learns, basically, that he is living inside a simulation and that his memories of and emotions for his family are not real.  Hauntingly, he asks if he will continue to exist, when Picard and the others depart from the holodeck.

The lieutenant’s plight is the “seed” or kernel of a great, developing Star Trek concept. As the episodes of The Next Generation continue, we see Riker (Jonathan Frakes) fall in love with a hologram, Minuet, in “11001001.”  We also see a hologram outgrow his programming and built-in character (as a villain!) to become a curious, sentient being in “Elementary, Dear Data” and so forth. And then, in the time of Voyager, the EMH (Emergency Medical Hologram) played by Robert Picardo is a central character, one who learns to become more than the sum of his programming. By the end of that series, the case is made for the rights of holograms as sentient, individual beings.

And that idea is planted right here, in the 12th episode of Star Trek: The Next Generation. 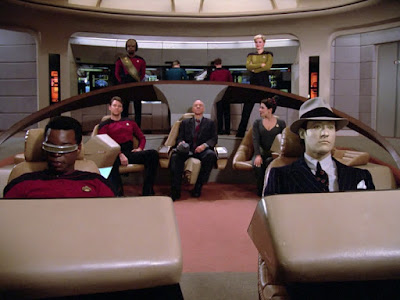 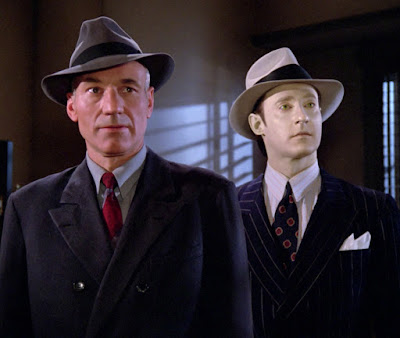 “The Big Goodbye” is indeed a fun episode of Star Trek, and a successful one too, despite some of its limitations. We never see the Jarada, for instance, for budgetary reasons. One wonders if they were the beginning of the concept for the Borg, however.

Similarly, it seem a shame to have Wesley at the forefront of the holodeck repairs on the Enterprise. Again, he’s a teenager who has never been to Starfleet Academy. The Enterprise, we know from episodes such as “Hollow Pursuits,” possesses whole engineering teams qualified to handle problems like the one that crops up here. 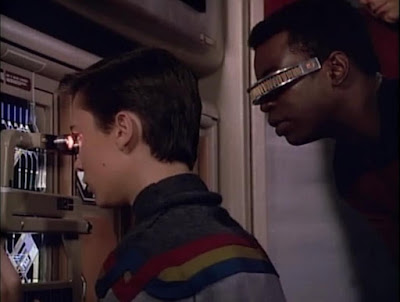 Lastly, one might argue that “The Big Goodbye” is too good, too successful.  The series keeps trying to recreate this vibe of romance and comedy in future “holodeck” installments with titles like “A Fistful of Datas” or “Ship in a Bottle.”  The holodeck, as a dramatic device, is best utilized only occasionally.

These are minor quibbles however. “The Big Goodbye” tells a story of great humor, and romantic chemistry, and then culminates with a meaningful thought about the nature of future technology.  This episode represents Star Trek at its finest, and is the best installment of Early Next Generation.