The Evil Touch: "The Upper Hand" 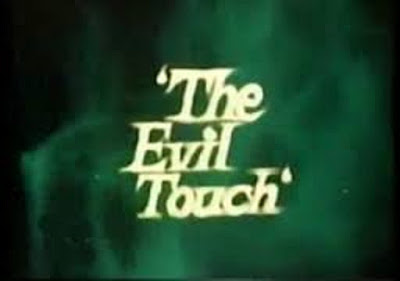 In "The Upper Hand," Roger Carlyle (Peter Gwynne), husband of health food guru Louise Carlyle (June Salter), arranges his spouse's murder. After a return home from a trip, he tells her to check out some equipment (a fruit press) in the basement, but neglects to tell her that the stairs have been removed.

After Louise falls to her death in this apparent accident, and the members of the "Youthful Forever Club" mourn, Roger's maid, Jenny (Julie Harris) begins to black mail him.

She takes Louise's fur coat and jewelry, and he can't stop her, lest the maid reveal the truth about what really occurred in the house. At the same time, the police begin to nose around the Carlyle home for more information about Louise's death.

As Roger and Jenny play their game of cat and mouse, Roger realizes it can only end if Jenny suffers a fatal accident too. He sets up a trap for the maid outside, with hedge clippers, unaware that the police are on the premises... 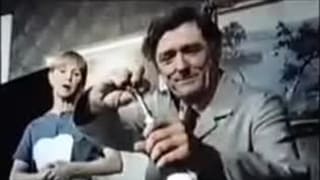 The Evil Touch (1973-1974) is back to its Alfred Hitchcock Presents-type mode in "The Upper Hand," with a story of conniving would-be murderers attempting to outmaneuver one another for personal gain. The tale is compelling, if not original. So far in this horror anthology series, we have already seen the murder-of-a-wife story in "The Lake," and a murder for money in "A Game of Hearts."  So "The Upper Hand," while entertaining, is not new territory for the series.

Perhaps the most intriguing part of the tale involves context. Louise Carlyle, the health food guru, is treated as a figure for laughs early in the story. She is killed while going to see a fruit press, and her husband sneaks junk food in the yard, because he is desperate to eat something other than health food and drink something other than carrot juice. In the episode's first scene, set in a car, Louise asks, specifically, about the nature and quality of Roger's bowel movements. Thus Louise is portrayed as an obsessive and obnoxious nag.  Today, in our culture, nutrition tends to be much more respected, and not treated with such contempt or humor, so this episode feels very 1970's in concept.  What was once viewed as oddball is now considered a legitimate part of the national conversation.

One quality of "The Upper Hand" that does work well is the visual approach. When Roger feels that he is being watched after the death of his wife, the camera adopts a high angle as he enters the house, making him look small and endangered. Another shot, near the end of the tale, features a murder weapon (the aforementioned hedge clippers) in the foreground of the composition, looming abnormally large.  The Evil Touch may not have had much to work with in terms of a budget for special effects, locations, or design, but the series is often shot in a way that makes the most of those limited resources.  This is a reason why I am reviewing the series here on the blog: to hopefully call attention to it for those who haven't seen it.  The stories are typically well-visualized, if not always original or fresh.  There's a raw quality to stories even as mundane as this one, that make them worth watching at least once.