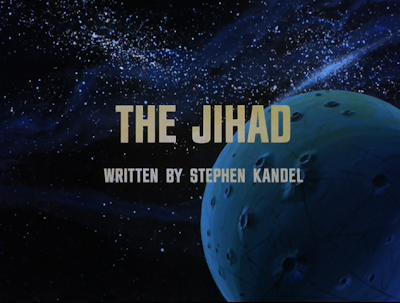 The U.S.S. Enterprise diverts to a small planetoid to meet with a feline alien race called the Vedala, who are believed to be the oldest space-farers in the galaxy.

The Vedalan representative reports that an important religious artifact -- “The Soul of Alar” -- has been stolen from a warrior race known as the Skorr.  In recent generations, the Skorr have grown more docile and peaceful, but the theft of this holy relic could plunge the entire galaxy into a holy war of unparalleled dimensions.

Captain Kirk (William Shatner) and Mr. Spock (Leonard Nimoy) are selected along with several other aliens -- including a huntress, a warrior, and a lock-pick, to recover the Soul of Alar on a geologically-unstable planet suffering “gravitic shifts” and volcanic tumults.  Already, three teams have failed to recover the relic, and this may be the final opportunity to save the galaxy.

As the search for the Soul of Alar progresses in chaotic terrain, Captain Kirk becomes convinced that there is a saboteur in his group…and he thinks he knows who it is… 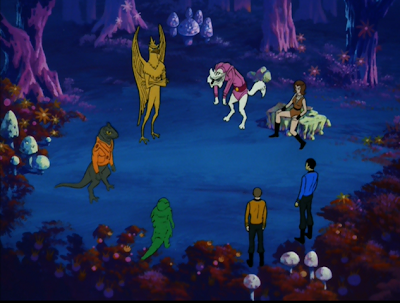 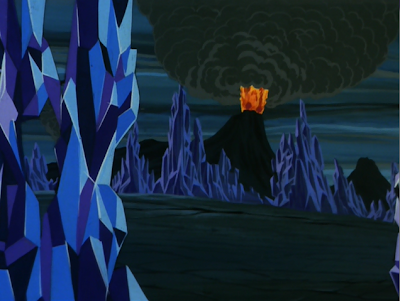 “The Jihad” by Stephen Kandel is another legitimately great episode of Star Trek: The Animated Series in part because-- like “The Slaver Weapon” -- it dispenses with the typical Trek format and heads off in a new and exciting direction.

Specifically, this episode finds Kirk and Spock leading a diverse alien task force on a distant world without the resources of the Federation to back them up, and also introduces many memorable races, most notably the inscrutable Vedala and the proud Skorr.

The final episode of Season One, “The Jihad” also takes a surprisingly adult tack in terms of its characters.  Lara, the huntress, for instance, several times expresses a physical/sexual attraction towards Kirk, and even suggests that they spend a little time alone (ostensibly to sleep together).  This isn’t exactly typical Saturday morning fare, but it is delightful.  There's even a joke made at Kirk's expense involving his previous (green-skinned) lovers. 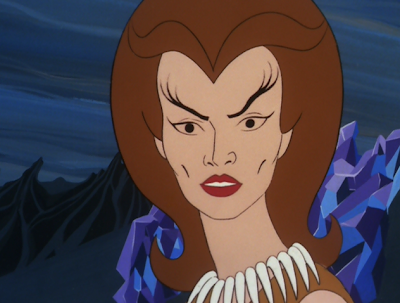 Also, the relic thief is ultimately revealed to be T’char, a member of the Skorr race who fears that his people have, in peace, forsaken their heritage and tradition.  “We will no longer live like worms crawling on the ground…we will conquer!” He declares, wishing his people to be more than “slaves to the illusion of peace.” 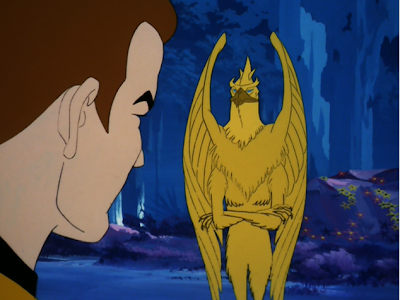 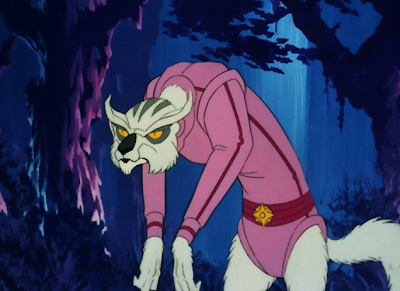 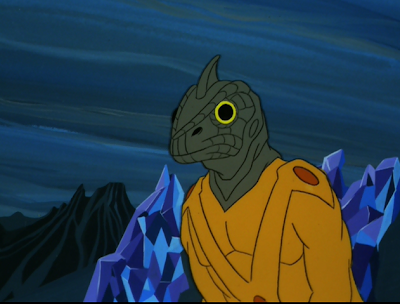 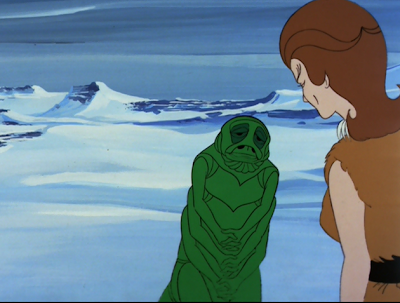 T’char’s campaign to maintain his people’s cherished heritage is actually very closely echoed in Star Trek VI: the Undiscovered Country (1991), a film which finds Klingons conspiring with Starfleet officers to break the peace, in order to preserve the tradition of Klingon/human antagonism.  It thus seems that for every moment of progress in history, there is always someone who is arguing the opposite course: a return to convention and tradition, even if that tradition means death, destruction and war. 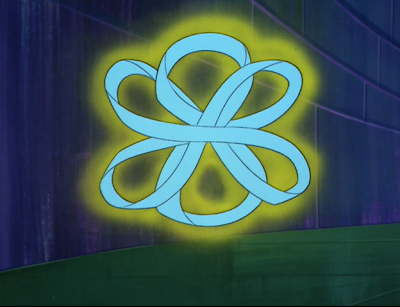 “The Jihad” also treads into some social commentary about religion.

The Soul of Alar is considered so prized a relic that its loss could cause a civilized people to forsake all their progress, and all their civilization, and plunge the quadrant into thoughtless war.  And yet that relic is just a thing.

In today’s world, alas, there are clearly religious people who feel the same way.  All across the globe, certain sites and certain land are considered holy, so much so that people are willing to kill and die to own it.  But again, what we're talking about here is soil and grass, stone and water.  Is it worth ending life over?

Thus, in the tradition of many great Star Trek installments, "The Jihad" suggests the essential irrationality and even immorality of religious thinking; that it is okay to take life in the name of God.  That possessing a piece of land is a superior value to "loving your neighbor."