The U.S.S Enterprise beams over two propulsion experts from the starship Fearless: Kosinski (Stanley Kamel) and his assistant from Tau Alpha C, the Traveler (Eric Menyuk).

These visitors have been assigned the task of testing different intermix formulas and different ways of entering warp speed.

The only problem is that Chief Engineer Argyle (Biff Yeager) and Commander Riker (Jonathan Frakes) have suspicions about Kosinki’s methods and results. His equations and explanations appear to be nonsense.

On the first warp speed test, however, the Enterprise surpasses warp ten and travels through two galaxies; some two million light years in all. Unfortunately, it would take over 300 years to get home after this “phenomenal surge of power.”

On an attempt to get back under Kosinski’s stewardship, the Enterprise travels even further, to a mysterious “place that is uncharted and unknown” where the “world of the physical universe and ideas are intermixed.”

Only Acting Ensign Wesley Crusher (Wil Wheaton) realizes the truth, that the alien assistant, the Traveler, has been manipulating time and energy to make these great leaps in velocity. The Traveler did not intend to strand the Enterprise, and must attempt to bring them all home safely. Unfortunately, he is very weak, and may not survive the journey.

The Traveler also reveals to Captain Picard (Patrick Stewart) that gifted individuals such as Wesley are the reason that he travels the galaxy. He compares Wesley to Mozart, only in the “intricacies of time, energy and propulsion,” not music. 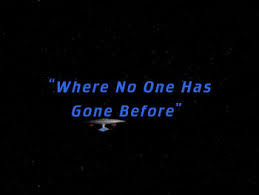 “Where No One Has Gone Before,” by Diane Duane, and Michael Reaves may just qualify as Star Trek: The Next Generation’s (1987 – 1994) first (mostly) good episode.

The story is certainly classic Star Trek in nature: one of pushing boundaries, exploring the final frontier, and mankind learning something new about himself and the nature of existence.

In the final case, that knowledge is, as Wesley notes in Main Engineering that “space and time and thought aren’t the separate things that they appear to be.”

Although one might wish that it were an adult, fully-trained and highly-capable Starfleet officer making this important recognition, at least there is an explanation in this episode for Wesley’s precocious and genius nature.

He’s a Mozart of Engineering, basically. He’s gifted and talented. 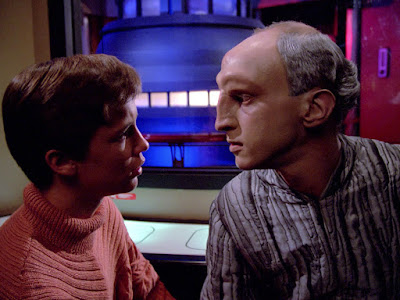 If that is indeed the case, as the Traveler suggests, than there is no place Wesley belongs more than the starship Enterprise, the flagship of the Federation and a vehicle for galactic exploration.

On the one hand, this idea of being “gifted” makes Wesley’s expertise (in stories such as “The Naked Now”) easier to accept.

On the other hand, Star Trek works best when it is not about superheroes, but normal human beings facing difficult challenges. On Star Trek: The Next Generation, we have a blind man with superior vision, a psychologist who can read emotional states of others, a super-human android, and now a genius “Mozart.” character.

Much of the episode’s drama arises from the Enterprise’s predicament at the end of the universe, trapped in a realm where thoughts manifest as reality. Some of the episode’s best moments arise from this situation. Worf remembers his pet Targ with affection. Tasha relives a frightening moment on her failed colony, and Picard nearly steps off a turbo lift into infinity. 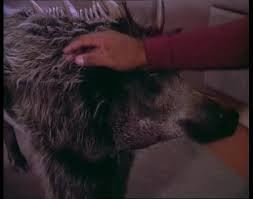 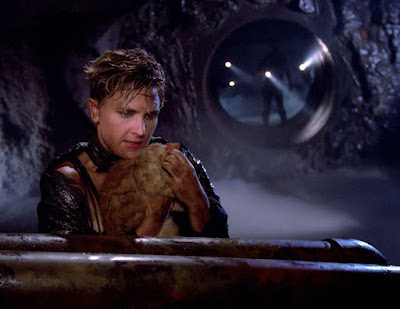 All these little moments add, in quick visual ways, to our understanding of the series' main characters. We see Worf smile at the sight of a childhood pet, allowing us to understand he is not just a dour, humorless alien.

And though Tasha talks about her upbringing and the "rape gangs" in other stories, this episode shows us a visualization of what that dreadful life looks like.

My favorite scene, however, is the one in which Picard encounters his long-deceased mother, and she asks him about their location in space. Is this the end of the universe, or is it the beginning of it? 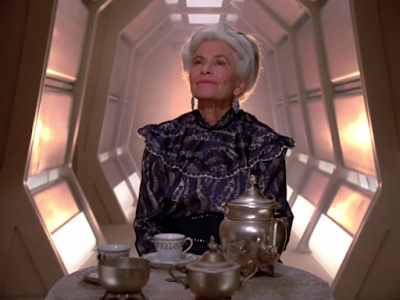 The scene with Picard’s mother succeeds on multiple levels.

First, we have Picard’s surprise to see his mother, and the tenderness he feels for during the encounter, which could not occur in normal space.

Secondly, we also have the mother’s love for her son, and her apparent (deeper) knowledge of his current predicament.

Patrick Stewart is particularly strong in this scene, having many emotions to portray in a short amount of time, from suspicion and sadness, to joy and regret. The most powerful moment occurs when Picard is contacted/distracted by Riker, and Picard realizes his mother (and her answers) are once more out of reach, forever, despite her comment that they are always with one another. 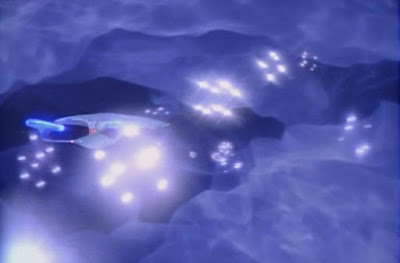 The Traveler returns in future episode of Star Trek: The Next Generation, including “Remember Me” in the fourth season, though here he appears to be dying from his travels. In his first tale, the Traveler has some wonderfully “Trekkian” moments in “Where No One Has Gone Before” that make the character memorable.

For instance, he notes that he travels because of curiosity (a trait he shares with humans), and he even shows compassion for Kosinski, in the climax.

Kosinski is a self-important loud-mouth, and yet, we sense, someone also deeply insecure about himself and his abilities. In that climactic moment, the Travelers says that he “needs” Kosinski’s help, and it is a moment of mercy and humanity which suggests that all of us, even the most flawed, need respect, love and a feeling of belonging.

Despite all the strong character moments and fascinating plotting, this episode lapses into some cheesiness at points. At one point, Captain Picard gets on the intercom and tells his crew to think good thoughts for the Traveler. This edict then requires Counselor Troi to comment on the surfeit of good feeling she is experiencing. It’s all very sweet, but a bit schmaltzy too. 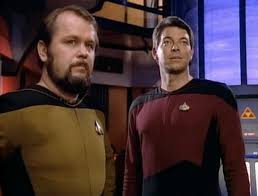 Finally, it’s another round of musical chairs with Enterprise chief engineers this week. In “Where No One Has Gone Before” we meet Biff Yeager’s Argyle, a character who would return in “Datalore,” as our replacement for McDougal (“The Naked Now.”)

Intriguingly, some of Riker’s dialogue in this episode suggests that many of the chief engineer’s duties have been folded into the role of executive or first officer. This shift in duties may account for the fact that the ship seems to have almost a half-dozen chief engineers or so (McDougal, Argyle, Logan, Leland T. Lynch), at least until Geordi assumes the role on a permanent basis in season two.
at September 03, 2019