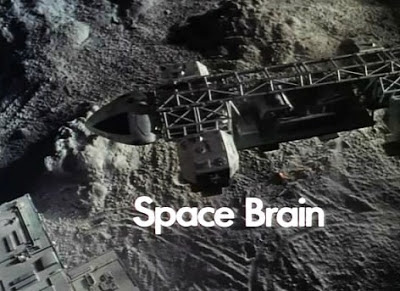 Yet despite such a silly-sounding (and appearing…) menace “Space Brain” by Christopher Penfold is still pretty great. This is so because the episode intimates an alien (and ultimately impenetrable…) order to the universe, and more-so, an alien hand influencing Alpha’s journey…and perhaps not for the better.

In fact, I was so taken with the sub-text and “under”-story aspects of “Space Brain” that my first officially licensed Space: 1999 novel, The Forsaken (Powys Media; 2003), might be interpreted as a direct sequel to this episode’s events, one that seeks to address some of the mysteries presented in the televised story. 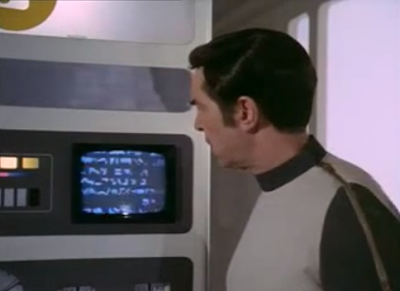 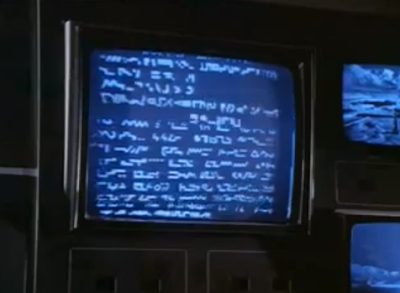 In “Space Brain” Moonbase Alpha’s routine is unexpectedly disrupted by the sudden transmission on every vid-screen of streaming alien hieroglyphs. Commander Koenig (Martin Landau) sends out an Eagle to investigate the transmission’s point of origin, but quickly loses contact with the craft.

In short order, a second ship is sent out, but one astronaut, Kelly (Shane Rimmer) returns from a spacewalk as a changed man.  He is now the “programmed” vessel for a vast entity in space, one on a collision course with the Moon.

Meanwhile, a small but incredibly-heavy meteorite crashes near Alpha.  Concerned about the impending collision with the larger obstacle, Koenig orders an Eagle filled with nuclear charges launched.  It is tagged to detonate at the center of the space-going entity.

As the threat progresses, Dr. Helena Russell (Barbara Bain) and Professor Victor Bergman (Barry Morse) seek to understand the threat better, and Bergman soon realizes that the meteorite is actually the crushed remains of the first eagle craft, destroyed by alien antibodies.

At roughly the same time, Helena understands that Kelly is acting as an intermediary, relaying messages from Alpha’s Main Computer to the entity in space, attempting to avoid the collision.

After undergoing a dangerous mental symbiosis with Kelly, Koenig accepts that the entity -- the so-called “space brain” -- is a peaceful organism, and one that turns at the “center of a whole galaxy, maybe hundreds of galaxies.”

But disaster looms when the eagle armed with the nuclear charges can’t be recalled, and the Space Brain begins to emit deadly antibodies so as to crush the Moon in the very way it crushed the first eagle spacecraft… 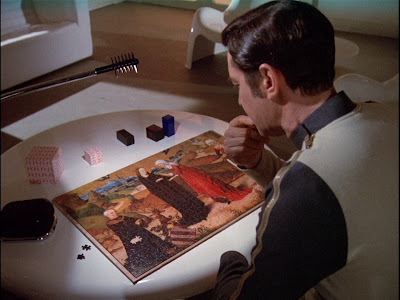 One of the arguments I universally make in support of Space: 1999 as a highly-visual science fiction initiative is that it functions (like Prometheus [2012], for example) on largely symbolic terrain, and its stories -- often criticized as being somehow confusing -- are crystal clear once the symbols are noted, studied and then thoughtfully interpreted.

“Space Brain” is no exception, and in terms of both visuals and musical choices, this episode proves rather impressive, despite the onslaught of killer soap suds.

For instance, “Space Brain” opens with various scenes of Moonbase Alpha personnel relaxing off-duty, solving puzzles (and trying to beat a puzzle record).  One of the first such shots depicts Alpha’s commander, Koenig, completing a puzzle in his office.

The puzzle itself depicts a painting by Jacque Daret (1404 – 1470), created circa 1435.  Called “The Visitation,” this work of art reveals Mary (with Jesus still in utero) visiting another pregnant woman, Elizabeth.  Art critics have interpreted Deret’s work to symbolize Mary’s role as intermediary between God and Man.

This work of art, then, reveals, in a sense, Kelly’s role in “Space Brain” as the go-between for Alpha and the entity in space.  In both circumstances, there is indeed a “visitation” and a human being is transformed by what she/he carries within.  The shot of the painting also reveals what Koenig only learns later: that the space brain, like Mary’s God, is a benevolent one.  On a much more basic level, all the “puzzle-solving” suggests the modus operandi of the teleplay: Koenig, Bergman, and Helena must each put together a piece of the space entity’s puzzle, from the indecipherable hieroglyphs, to Kelly’s odd physical condition, to the true (and horrific…) nature of the meteor. 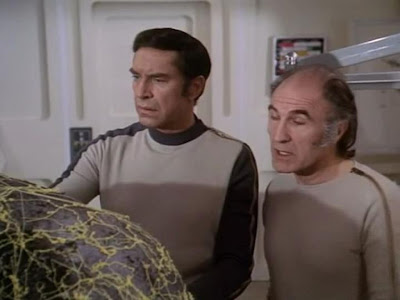 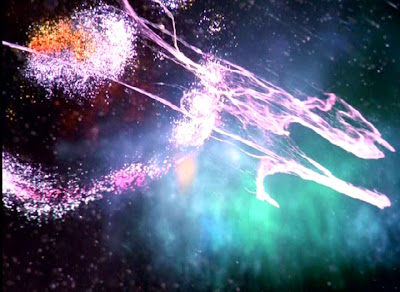 Late in the episode, the action is scored to Gustav Holst’s Planets’ suite, namely the movement titled “The Bringer of War.”  In terms of practicality, this music was likely seeded in to lighten the load on composer Barry Gray.  There’s a real world, production reason for its use.

And yet in terms of appropriateness and interpretation, Holst’s composition also fits in well with “Space Brain’s” themes. Specifically, Holst’s work is a seven part suite, and each part describes the “character” of that planet, and that planet’s influence on the psyche of humans.  Consider then that “war” ascends in Koenig’s mind as he prepares a pre-emptive strike with the eagle carrying nuclear charges, and only later realizes the errors of his ways.  The “Mars” composition is also scored to literal war, as Alpha falls under siege, nearly crushed by the killer antibodies of the space brain.

Put the two artistic visions and ideas held together -- peaceful interaction or Visitation between God and man, and then all-out war --- essentially present the two main perspectives depicted in “Space Brain.” The entity wants peaceful contact. The Alphans prepare for war.  The entity opens with communication and an intermediary. Human-kind faces a puzzle (and a crisis) with plans for destruction.  The book end works of art in “Space Brain” -- Daret’s and Holst’s -- convey much of the narrative’s deeper meaning.  Ignore the imagery and the soundtrack, and you’re not getting the entire picture.

Also, I often laud Space:1999 in terms of another quality for which it is widely disliked: it’s refusal to explain every aspect of its narrative and spoon-feed the audience easy answers. 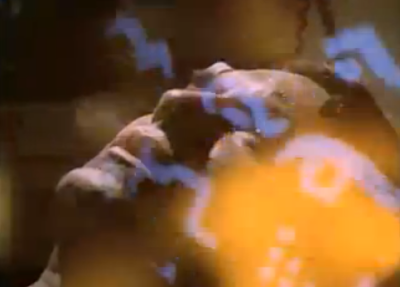 “Space Brain” never satisfactorily explains, for instance, why the nuclear-charged Eagle remote-control guidance system should short-out, rendering the collision with the space brain impossible to avoid.  Koenig himself dismisses – in explicit dialogue -- the idea that the space brain is behind the act.  By inference, this could mean, quite simply, that a third, unseen hand, is at work in this episode.  And that hand desires the space brain destroyed for some reason.  Thus it is using Alpha as its vessel for that very purpose.

Again, we must go back to the painting, and the idea of Visitation.  Is Moonbase Alpha being used or visited by another force, only as a bullet to the brain, for some unknown purpose?

That’s the plot-line of my book, The Forsaken.

But clearly, Alpha’s destruction of the space brain at the conclusion of this episode must boast terrifying and cosmic ramifications.  The dialogue explains how thousands of worlds depended on the space brain.  Accordingly, I speculate that the entity was a kind of regulating factor, ensuring the stability of stars and other environments.  Thus in its absence, everything becomes unstable, unpredictable…chaotic.  If you’ve read my book, you realize that’s my explanation for the wild, out-of-control, action-oriented events of Space:1999’s second season.  The galaxy has descended into chaos, and all bets are off.

Like I said, that’s my interpretation, but it need not be anyone else’s.  What I love about “Space Brain” is that it leaves open these little intriguing mysteries, and the viewers can fill them in, interpreting the clues in a way that they see fit, and that seems to fit the facts.  I’ve done so, as I note above, but other viewers are also welcome to interpret the symbols in a different fashion.  I much prefer these open-ended, stimulating mysteries to “techno-babble” resolutions we get in latter-day space operas. 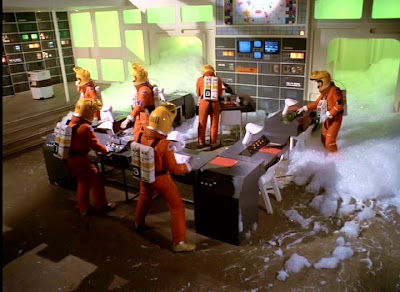 The biggest stumbling block, of course, for “Space Brain” is the visual depiction of the alien antibodies.  The foam or soap-suds don’t look like organic antibodies, but rather just like a washing machine has gone dangerously out-of-control.

I realize that this visualization will be a deal breaker for some viewers, and I accept that fact, but it’s truly a shame because there’s a lot going on in “Space Brain” beneath the bloody foam attack in the last act.  Open-minded s.f. viewers forgive the giant ice-cream cone-shaped planet killer in Star Trek’s “the Doomsday Machine” and the panto-Myrka in Doctor Who’s “Warriors of the Deep, so I would ask (again) that Space:1999 be given the same consideration.

Going back to the possibilities inherent in “Space Brain,” I once pitched to Powys Media a novel titled “Ordination” in which a race of high priests to the Space Brain arrived on Alpha and attempted to induct Maya into their number, for nefarious purposes…the destruction of a rogue space entity like the one seen in this episode...
at September 11, 2019