Buck Rogers: "A Blast for Buck"

A red alert rocks the Earth Directorate Headquarters in New Chicago, and Buck (Gil Gerard), Wilma (Erin Gray), Dr. Huer (Tim O'Connor) and Twiki (Mel Blanc/Felix Silla) investigate the crisis. A strange object (shaped like a yo-yo) materializes in Dr. Huer's office. It is followed by a transmission from space: an enigmatic riddle about the "a man out of Old Earth's past."

Fearing an all-out invasion of Earth, Buck submits to a mind-probe procedure to see which of his former nemeses may be responsible for this new threat to Earth. 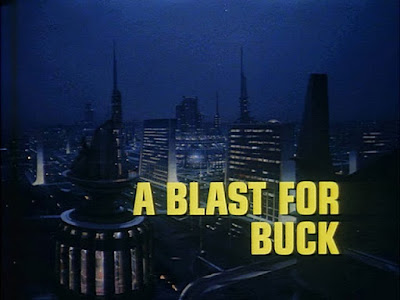 A little context: once upon a time, a season of television was not 15 episodes, or 6 episodes. It was 25 or 30. That's a tremendous amount of programming to produce in a relatively short amount of time, and oftentimes series fell behind in the production schedule, and so had to make up that time with...a clips show.  This is, in fact, how "The Cage" was (brilliantly) re-purposed into "The Menagerie," on the original Star Trek.  So clip shows do not always have to be terrible.  Sometimes, they are genuinely inventive.

As far as clips shows go, "A Blast for Buck" is not the worst ever produced. That honor would have to go to the dreadful and highly-embarrassing second season climax of Star Trek: The Next Generation, called "Shades of Grey," which found Cmdr. Riker poisoned by an alien plant. He could only survive the poisoning by reliving dangerous moments from his past.

"Shades of Grey" was horrific, and for reasons having nothing to do with the actual narrative. 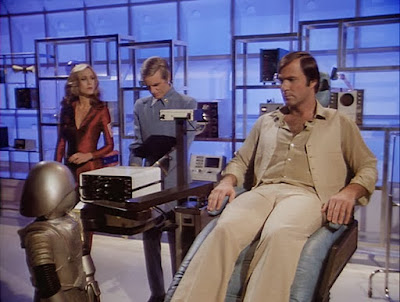 "A Blast for Buck" isn't good, for certain, yet it doesn't reach that zenith of true awfulness, as does "Shades of Grey," perhaps owing to the breezy, fun nature of this 1970's series overall.  This episode is essentially a lark, one that ends with no real threat, but rather a (misguided) holiday greeting from Gary Coleman's Fox, president of Genesia. The story features danger, but isn't life or death for Buck in the final analysis.  The threat in "Shades of Grey" is hokey, and over-presented, and the irony-free, somber performances there by Marina Sirtis and Diana Muldaur make the ones in this BR episode look like Academy Awards material.

For those keeping track, in the course of a "Blast for Buck," Buck remembers incidents from "Vegas in Space," "Unchained Woman," "Planet of the Amazon Women," and "Cosmic Whiz Kid." Wilma undergoes the mind probe procedure too and recalls events and people from "Return of the Fighting 69th." Twiki puts on the probes as well (!) and remembers "Cruise Ship to the Stars."  Finally, Buck is back to remembering "Planet of Slave Girls," "The Plot to Kill a City." 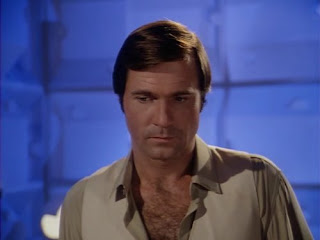 One intriguing thing about "A Blast for Buck" is that the story's mechanism for setting up the clips, Directorate memory probes, becomes a key aspect of future stories, such as the second season installment "Testimony of a Traitor."  In a series that is not always strong in terms of continuity, it is interesting that something good -- or at least useful to future installments -- comes out of a mediocre clip show

Also, in terms of continuity, this episode features some nice reveals about what happened following Buck's previous adventures. For instance, the viewer learns that Hugo the android is still wandering the surface of Zeta Minor ("Unchained Woman.").

Similarly, the audience discovers that Kaleel, the cult-leader of Vistula ("Planet of the Slave Girls") escaped from custody and is now wandering the planet's deserts as a "harmless lunatic."

Also, some villains remain on the loose, including Velosi, Roderick Zale, and Kellogg, which makes one wonder why the Directorate didn't keep them imprisoned.  But it's fun to learn a little more about stories that were, essentially, conceived and executed as stand-alones. As goofy as a clips show may be, this particular episode successfully ties the universe of first season Buck Rogers together, and lets the audience know that it is a consistent place, one where all the stories are connected, at least in the memory of the lead characters. The villains of the week get to live on here, and get these post-scripts.

Not too much more to be said about "A Blast for Buck." The producers for Buck Rogers needed 48 minutes to air, and came up with a fun, relatively harmless way to vet a clips show.

We can all be relieved, I suppose, that clip shows no longer appear on TV on a regular basis.