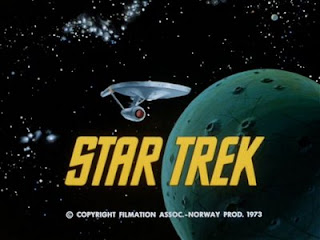 The U.S.S. Enterprise ferries Commodore Robert April, the first captain of the starship, and his wife, Sarah, to the planet Babel, where they will be honored for their many years of service to the Federation.  In fact, Robert is now nearing the Starfleet’s “mandatory retirement age” of 75, and laments the fact that his journey is nearing its end.

Captain Kirk (William Shatner) diverts the Enterprise’s course, however, when sensors detect an alien space vessel traveling at Warp 36 and heading straight into the Beta Niobe supernova.  The Enterprise uses a tractor beam to grab the racing vessel, but only ends up being pulled into the nova itself.

Miraculously, the Enterprise and the other starship survive to emerge in another universe, one where the stars are black, and space is white. As Mr. Spock (Leonard Nimoy) soon learns, however, time is also moving backwards, meaning that the crew will soon become too young to manage the controls of the starship. 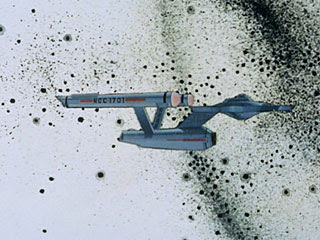 At first blush, “The Counter-Clock Incident” is another one of those very gimmicky Star Trek: The Animated Series episodes; one that seems to exist primarily because the concept is highly visual, not because it makes good story (or scientific…) sense. Here, the Enterprise crew ages in reverse, becoming young children in the process, and yes, we’ve seen this kind of tale before.  “The Terratin Incident” featured the crew shrinking while “Mudd’s Passion” involved a love potion, and so on.

I wonder, does the age requirement also apply to Vulcans, or only to humans? 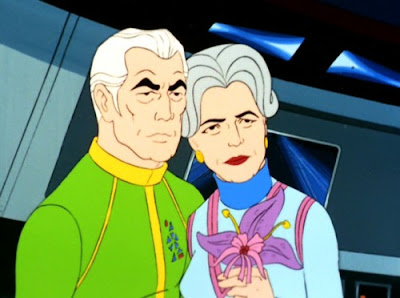 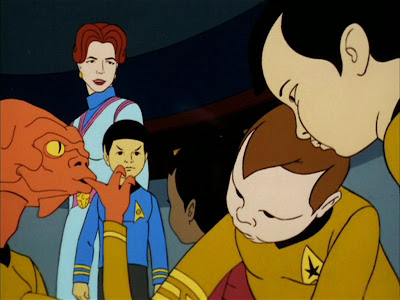 Secondly, “The Counter-Clock Incident” practically overdoses on original series continuity, and frankly, that’s impressive. Here, we learn of the building of the Enterprise at the San Francisco shipyards, and get mentions of Babel (“Journey to Babel”) and of the super-novas at both Minara (“The Empath”) and Beta Niobe (“All Our Yesterdays.”) A Capellan flower also makes an appearance, and Capella was visited in the Star Trek episode “Friday’s Child.”  Considering that this episode was aired in 1974, before our culture had overdosed on sequels and such, it’s rather remarkable to consider the internal continuity.  Clearly, someone was paying close attention to the details of the mythos.

Still, the whole person “aging backward” trope in “Counter-Clock Incident” is one that has appeared frequently in cult-television history, and is one which I actively dislike.  This concept doesn’t possess even a borderline plausibility.  How is a baby-sized mammal (an elder) to give birth to a full-sized body (a youngster), purely from a physical standpoint?  Series such as Buck Rogers in the 25th Century (“The Golden Man”), Mork and Mindy (in terms of Mearth), and Star Trek: Voyager (“The Innocents”) have utilized this illogical idea too, and it never quite seems plausible, in my opinion.  Is the idea that as an old person, or baby, you are just spontaneously born from “death?”  If so, how do you get the genes from your parents? 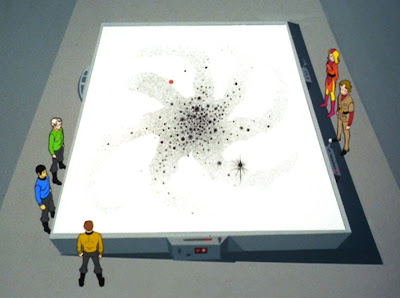 By the same token, “The Counter-Clock Incident” uses the same deus-ex-machina ending as “The Terratin Incident” and Star Trek: The Next Generation episodes such as “Lonely Among Us” and “Unnatural Selection.”  The sick or “affected” individuals go through the transporter device and are restored to normality.  As I noted a few weeks ago, the transporter is really Star Trek’s miracle medicine.  It can be used to fix anything, and renders Dr. McCoy a dunsel.

Despite the illogical story I do feel like “The Counter-Clock Incident” is one of those “feel good” episodes of Star Trek (not unlike The Voyage Home [1986], one where the happy, re-assuring emotions and pro-social value in some way trump science or even believability.  The head may be unimpressed, but the heart flutters.