Star Trek Week 2019: "How Sharper Than A Serpent's Tooth" 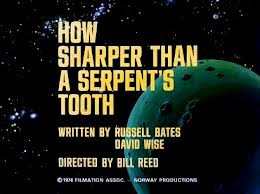 
The U.S.S. Enterprise tracks the origins of a mysterious alien space probe which recently scanned Earth and headed out into deep space.  The ship encounters on its path a giant space vessel surrounded by an "immense energy field."

The incredibly-advanced ship, which can transform into a giant serpent, is the home of an alien called Kukulkan.  As ship's navigator Ensign Walking Bear notes, Kukulkan is also the name of a God from Aztec and Mayan legends: a winged being who came down from the sky and brought "knowledge" with him.  Unfortunately, this "God" is also a vengeful one, and demands that the Enterprise crew worship him... 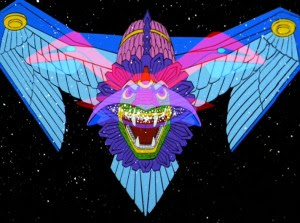 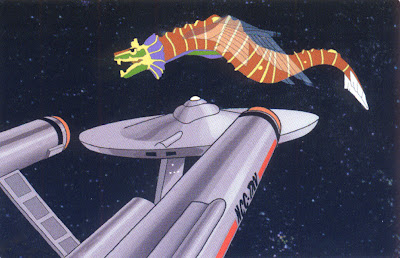 Written by Russell Bates and David Wise, "How Sharper Than a Serpent's Tooth" takes its title from Shakespeare's King Lear.  The rest of the quote goes "How sharper than a serpent's tooth it is to have a thankless child."  Therefore, this episode's title takes Kukulkan's perspective, and  refers to humanity as his "ungrateful" children.

This is an important aspect, actually, of Star Trek's creative equation.  On more than one occasion in the franchise, mankind is described as being a "child-like" species, one taking its first steps into a larger universe.

And simultaneously, in episodes such as "Who Mourns for Adonis Adonais" -- a clear antecedent to this animated entry -- man is seen as ungrateful, but ultimately necessarily so.  None of us can remain children forever, and any parent figure, whether Apollo or Kukulkan, who asks us to do so is asking for something that can't be given.  "We've grown up now," Kirk tells Kukulkan here.  "We don't need you anymore."

Those words are a knife in any parent's heart, to be certain, but also an expression of the fact that the task of parenting has been accomplished in sterling fashion.  The goal of all parents is -- or should be -- to raise self-sufficient, self-directed beings, ones capable of thriving and growing independently.  Still, those words must hurt, and I like that Kirk very much acknowledges that hurt in the coda of this story by referencing the line from Shakespeare. 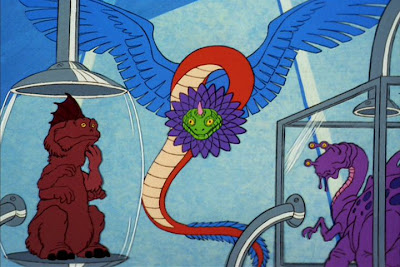 Although some viewers may perceive "How Sharper Than a Serpent's Tooth" as a rehash of other tales, I've always enjoyed this episode of Star Trek: The Animated Series, in part because I like the idea of God as an old, lonely being, a parental figure who doesn't know, in the end, when it is time to let go.  This makes the God in this case rather sympathetic.

Secondly, I like the new character, Ensign Walking Bear character, and his contributions to the story. I suspect that Walking Bear is the first Native American crew member we meet on the Enterprise, though the DC comics of the 1980s also featured a Native American named Bearclaw, if memory serves.  And of course, Chakotay was a major character on Voyager in the 1990s. 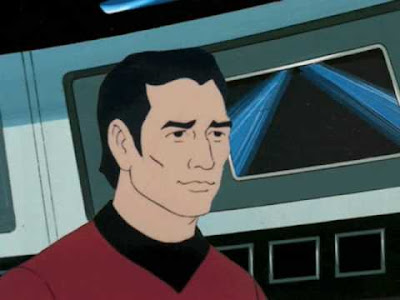 From a visual standpoint, this episode of the second season is also, surely, a budget-buster.  Kukulkan not only boasts an alien zoo (replete with a horta...), but a spaceship interior which can re-form into a giant interactive puzzle built from the architectural flourishes of various Earth cultures.


Next week: the final episode of Star Trek: The Animated Series: "The Counter Clock Incident."
at September 06, 2019