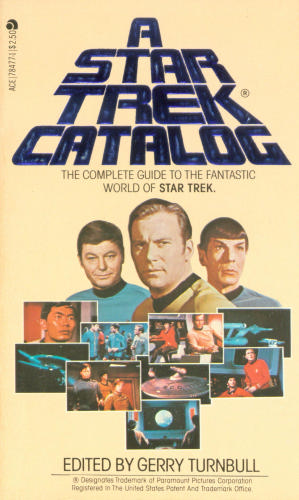 When I was in the fourth grade, I bought at the school book fair a book titled A Star Trek Catalog, edited by Gerry Turnball, and it changed my young life.

In the pages of this book were the titles and synopses of all Star Trek episodes, as well as episodes of the Animated Series, and there was also a listing of fan-clubs, and even merchandise, meaning toys.   The book featured an interview with Gene Roddenberry, post-Star Wars (1977), and closed with the promise that Star Trek would someday return to our screens.

And of course it did.

But I loved this book (and then a year later, Allan Asherman's The Star Trek Compendium) because, well-before the Internet, A Star Trek Catalog assembled the important data on Star Trek in one place.  I remember memorizing the episode titles and descriptions and using them for reference during series reruns on WPIX in New York.  I began keeping a tally of which episodes I had seen, and which I hadn't.

I don’t know for certain, but I have the feeling that, at age 9, A Star Trek Catalog was my first experience with a TV-reference book.  I later read The Making of Star Trek, David Gerrold’s brilliant The World of Star Trek, and the equally great Gary Gerani book, Fantastic Television.

But at first, it was A Star Trek Catalog that whet my appetite to learn more about a science fiction TV series. 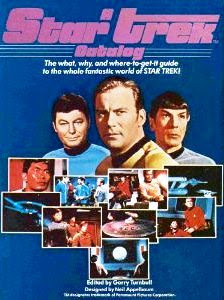 I kept my original copy of A Star Trek Catalog for decades, though it was supplanted by the titles above, and others.  I finally threw away the book when the binding broke, and I was reading it in three separate sections.  But a few years ago, I found a copy at a yard sale in great condition, and I’m glad to have it back on my shelf.

It’s probably not a book that is mentioned often as a great Trek reference book, and I understand that.  But A Star Trek Catalog was there at exactly the right time for me, and it is like a dear old friend…