Beyond Westworld: "The Lion"

In "The Lion," John Moore (Jim McMullan) is rooting for his friends at Lionstar Motors to succeed in an important test drive of an experimental new car with a "gasahol" engine  The so-called Lion could thus revolutionize travel.
Unfortunately, there is a terrible (apparent) accident during the test drive, and driver Corey Burns (Michael Cole) is injured, and left paralyzed, much to the chagrin of his future wife and the heir to the Lionstar Company (Christine Belford).
Enraged by the injuries to his friends, John investigates and learns that Quaid's (James Wainright) robots are somehow involved at Lionstar Motors.
Apparently, Quaid controls several oil rich countries in the Middle East, and now wants to control a fuel-efficient car too.
When Corey gets back in the car to drive the Lion, the robots plan to finish him off.
But John Moore drives defensively to save his friend... 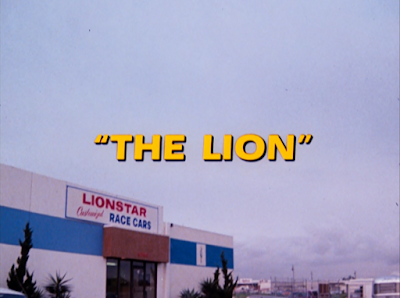 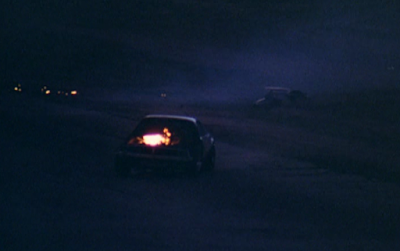 The first of the two unaired Beyond Westworld is just as terrible as one might expect, given the quality of the episodes that were broadcast in 1980.
Once more we have an utterly ridiculous premise that finds Quaid thinking small time instead of big time, attempting to influence the outcome of a test car race.  Again, this is a man who can build exact robot duplicates of heads of state, airline pilots, celebrities, and so forth.  Imagine the havoc he could wreak on a global stage.

Instead, this is a repeat of  "My Brother's Keeper," wherein he tries to control a company or corporation.
The episode reaches ridiculous eights after one character reveals in a briefing that Quaid is already in control of several small countries in the Middle East, controlling their oil.  Now that sounds like a big deal to me; a much bigger deal than a family-owned car company and its struggles with a special fuel efficient engine. I would have loved to seen an episode involving that premise.
And indeed, it seems like John and Pam (Connie Sellecca) might want to devote their time to helping those foreign countries fight back against Quaid, rather than worrying about Lionstar's attempt to bring the experimental engine market.
Another ridiculous moment comes later. We watch as Quaid performs surgery on a robot. He installs the robot's programming on a mini-cassette.  So yes, the Westworld robots all run on 1980s mini cassette tapes. Pretty amazing.
Or pretty analog.
Fans of cult-TV will be intrigued to note that Russell Johnson -- the Professor on Gilligan's Island (1964-1967) plays Quaid's new flunkie in "The Lion, replacing the character played by Severn Darden in early installments. Also the great Michael Pataki is here, in a nothing role. 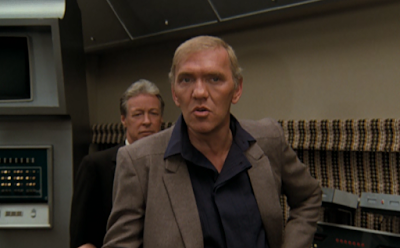 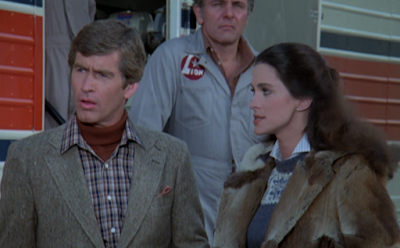 Finally, I don't like being one-sided in my reviews, so I should add that "The Lion" features one very entertaining scene.
Specifically, Quaid wishes to meet with John, and arranges a rendezvous in a trailer.  There, he implores John to join him.  "Imagine what we could accomplish together," he implores.
John refuses to team with him, and Quaid -- actually in a different location -- detonates an explosive at John's location. That means that he isn't really talking to Quaide at all, but a robot duplicate.
The series really, really needed more surprises like this one.
at February 18, 2021