Beyond Westworld: "The Takeover"

In "The Takeover," Dr. Quaid (James Wainright) tests a new chip that can be installed in the human brain, and make people obey his orders.
He tests this new device on a Los Angeles police officer, Captain Nicholson (Monte Markham), and uses his new servant to get close to California's governor, Eric Harper (Robert Alda), who is up for re-election and may one day run for President of the United States.
John Moore (Jim McMullan) and Pam Williams (Connie Sellecca) investigate, and most stop the assassination of Harper at a televised debate in Los Angeles. 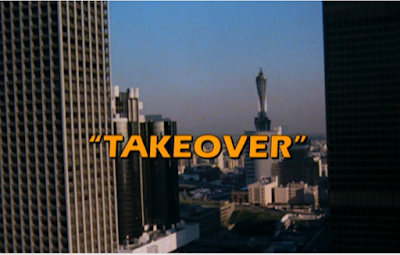 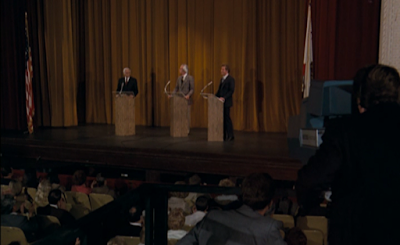 The final episode of Beyond Westworld (1980) attempts to change things up a bit, at least before walking that change back.
This week, a robot neuro-surgeon, played by Star Trek's (1966-1969) George Takei, installs a tiny chip into a human being, making that human a kind of brainwashed agent for Quaid.  Nicholson has no awareness that he is being controlled, or acting strangely, right up until the last minute.
This plot device opens up a lot of possibilities.
Now, John and Pam have to worry not merely about robots, but humans who have seen their will dominated by Quaid because of the implant  Obviously, there are much more overt moral questions involved in killing a human being, than deactivating a robot.
But by the end of the episode, Quaid decides the tiny implant is a failure and to abandon it, thus bringing viewers right back to square one, and the perennial concept of evil lookalike robots.
I do confess at being a bit baffled by this episode's conclusion. 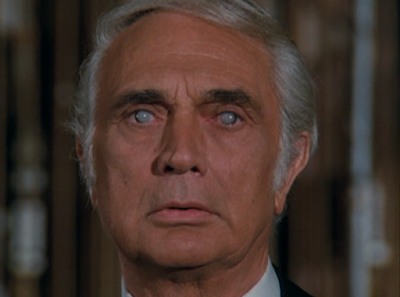 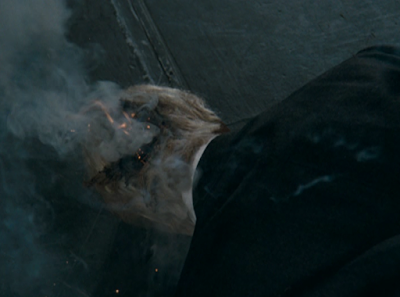 In the episode's finale, Governor Harper is shot in the head (on live TV, at the debate...) and is revealed to be a robot.
So, Quaid sent a controlled human (Nicholson), to kill one of his own robots, one who was already the governor of California, and primed to become a presidential candidate?
All to test the implant?
That seems...ridiculous. I would have kept the governor in place, and let him become President, still acting as my agent.
Still, it is interesting to note that when this episode was made, another former governor of California was also making a run for the highest office of the land: Ronald Reagan.  I wonder if he was a robot too...
Going further down the rabbit hole of this episode's narrative, what does it mean to the citizenry of California, and the United States, to see a sitting governor shot on TV and outed as a robot, for all to see?
Does all the citizenry know about the Delos robots and their escape form Westworld?  It seems like, if not, this would be a huge media incident.
California Governor shot on stage! Revealed to be Delos Robot! More at 11:00!
But again, Beyond Westworld can't be bothered to explore deeply a single interesting concept.  This episode, instead, is an excuse to play cops and robbers.  Moore goes undercover (again), as a police officer.
Despite all the flaws in "Takeover," I did really get a kick out of the cast. This episode features Monte Markham, George Takei, Hari Rhodes, Robert Alda and Martin Kove. It's a veritable "who's who" of second-string 1970s TV actors.
As noted above, "Takeover" is the final episode of Beyond Westworld, and it showcases, perfectly, why the series failed to catch on. The narratives were monumentally uninteresting, and really good story ideas and concepts were poorly handled, or ignored all together.
at February 19, 2021