Planet of the Apes: "The Trap:

There's a long-standing, honorable and familiar tradition in cult television regarding a particular story scenario: 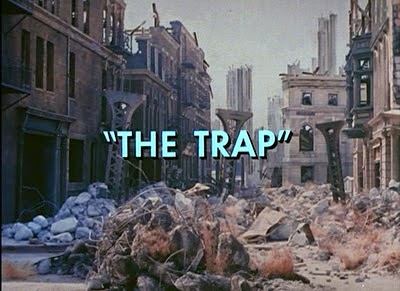 You may have seen this dramatic idea played out, large scale -- human pilot against alien Drac -- in Wolfgang Peterson's epic film, Enemy Mine (1985), for instance. But a similar tale has also been a staple of sci-fi TV programs across the decades

This "My Enemy/My Ally" narrative conceit, as I sometimes term it, proved especially popular during the 1970s and 1980s. Perhaps it was a coded reflection of the Global Cold War between the U.S. and the Soviet Union, a conflict that separated the world into two intractable sides, two ideologies, two superpowers.

Episodes of the "My Enemy/My Ally" variety often suggest that -- once thrown together into a life-threatening scenario -- enemies can find a common bond if only they leave their pre-existing, hostile, cultural beliefs behind. The notion is that understanding and trust are seeds that can grow inside people over time, and even blossom into peaceful co-existence, tolerance and hopefully, real friendship.

In the era of mutually assured destruction, it was powerful for sci-fi television to suggest that -- just by being thrown together into a common danger with our mortal enemies -- we could prevent nuclear annihilation. By personally knowing our enemy, we could make a better choice...for the planet. 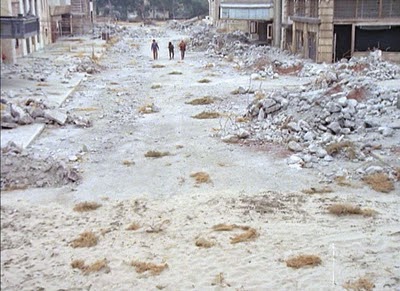 One highly-intriguing variation of the "My Enemy/My Ally" theme involves the controversial issue of race relations in America. By and large, this sub-text was the thematic territory for most episodes of the short-lived, 1974 Planet of the Apes series that aired on Friday nights (on CBS) in the fall of 1974.
Writing about the TV series in his book, Planet of the Apes as American Myth: Race, Politics and Popular Culture (Wesleyan University Press, 1998, page 157), author Eric Greene noted that the TV version of the popular franchise showed: "the victory of "reverse racism" over equality, as the formerly oppressed apes lord it over the degraded humans, who are now apes' servants and, in some cases, slaves. (In this aspect, the Apes show may have anticipated the white cry of reverse racism that would later gain currency...)" 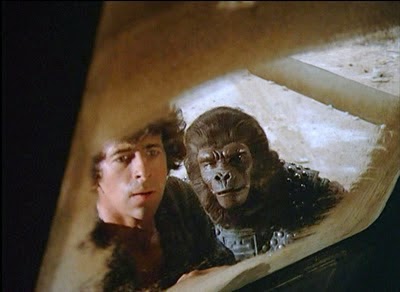 In "The Trap," (original airdate: September 27, 1974) written by Edward J. Lakso and directed by Arnold Laven, our three heroic fugitives make for a village called Numai that has "a reputation for harboring fugitives."

Nearby stands the ruins of San Francisco, and Virdon believes that there may be some operational computers there...some computers that could help them get back to their own time.

Unfortunately, General Urko and his Lieutenant, Zako (Norman Alden) are hot in pursuit. An earthquake rattles the ruined city, and Burke and Urko tumble down a deep hole into the Earth...into a subterranean subway system from years past...from a time when humans ruled the planet.

While Zako and Virdon negotiate above to rescue their trapped comrades, Urko and Burke attempt to forge an uneasy alliance below. Urko, a pro-apes, anti-human bigot repeatedly trades in insulting stereotypes. "I always assume a human is lying. It makes things easier," he notes. "I don't work with humans," he likewise insists.

Finally, he refuses to help Pete build a steel support cross (a metaphor for a well-known religious symbol, perhaps, of peace, reconciliation and forgiveness), because to do so is "human labor" and, well, he doesn't do human labor.

Up above, Zako similarly informs Virdon, "No bargains with humans. You are worth nothing."

As human viewers living in modern America, the audience instantly recognizes Urko's protests for what they are: prejudice. 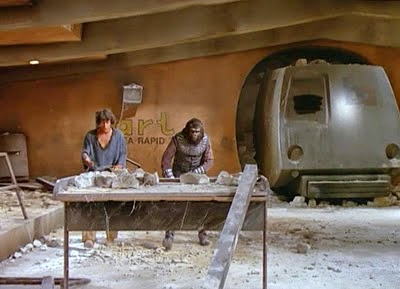 Urko boasts a pre-existing belief that humans are inferior, but his belief is not based on facts or science.

It's just...a strongly-held (and absolutely wrong) personal belief. Burke actually shows Urko "the facts:" a line of posters for organ replacement technology, disposable clothing and mass transit. He even shows the gorilla a human-manufactured solar battery that has operated for centuries. All these artifacts reveal that human beings are intelligent, resourceful creatures, but Urko refuses to believe his lying eyes.

So the crux of "The Trap" involves a very interesting notion; that Urko's (and by extension Ape Culture's)... bigotry results from a deeply-felt sense of historical insecurity.

The apes already know that their culture was built on man's civilization a long time ago and still feel inferior. Rather than face this truth, they deny it. They try to erase it.

When Urko discovers a poster in the subway for the San Francisco Zoo (depicting a primitive gorilla in a cage, eating a banana...) he goes ballistic because his irrational belief about humans has been challenged; his strongly-held racism has gone up against that inconvenience known as "reality." Facts will not sway him.

In gazing specifically at racism (and in making human beings -- all of us -- the victims of entrenched racism), "The Trap" exposes the vast gulf in understanding and sense of extreme anger that often precludes the development of trust between people of different backgrounds, whether ideological or based on skin color.

To both sides in the on-going "racism" debate, the long span of existing history becomes only an opportunity to relive old hurts. Thus, no progress is forged. It's just tit-for-tat. Urko can't let go of a past in which humans, he believes, threatened ape power and superiority.

And Burke, at least tacitly, views the ape's world as "upside down." He wants to go back in time and prevent the ape planet from existing in the first place. He wants to take his planet back. So long as these attitudes remain locked, there can be little progress between opposed personalities/viewpoints. 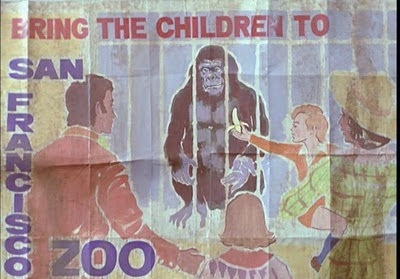 Interestingly, "The Trap" offers a smidgen of hope about entrenched racism...and then skillfully draws back from that hope in time for a very dark ending.

Zako gives his word that he will allow Burke, Virdon and Galen to go free once Urko and Burke have been rescued from the station below. Going up against Urko...the diffident Zako keeps his word. He is a man (er...Ape) of honor.
But then, after the fugitives are gone, Zako sees the point of contention between Urko and Burke: that poster of the San Francisco zoo; that relic of old hatreds. In a tirade of violence, Zako shreds it to pieces...realizing that there is a secret to be protected after all. He feels duped by the fugitives; like they used him. The implication is that he will not -- as he did here -- trust humans any time soon.

What "The Trap" intimates is that real progress can occur between racial "enemies" only when the past is no longer a daily prologue and incitement to anger. That's a tough lesson to learn...especially when people on all sides feel wronged.

But "The Trap" remains valuable because it occurs almost entirely in a location -- the post-holocaust city -- where out-of-control human hatreds finally turned on themselves and destroyed virtually everything.

That's the final destination of sustained ideological and racial hatred, isn't it? Annihilation. For everyone. (And we know, from Beneath the Planet of the Apes that's the destiny this franchise envisions for beings of the planet Earth).
So, in this dark "My Enemy/My Ally"-styled story from the Darwinian Planet of the Apes, audiences detect how deep-seated prejudice survives. And how learning -- and therefore forgiveness - is possible...but may be outright refused, even in the face of reality. And in the face of cold, rational facts too.
at February 23, 2021