Beyond Westworld: "Sound of Terror"

In the final aired episode of Beyond Westworld, "Sound of Terror," Quaid (James Wainright) uses his robots to steal two canisters of uranium and build a nuclear bomb.
He intends to give the weapon to a North African warlord, so he can become president of his country. Then, that country will be able to offer safe haven to Quaid.
John Moore (Jim McMullan), and Pam (Connie Sellecca) trace the stolen uranium back to a nuclear power plant where a famous pop music act, Power and Ruth, performed recently at an anti-nuke protest.  They fear that one of Quaid's robots has infiltrated the act.
Moore goes undercover with Power and Ruth's band, pretending to be their new PR agent, while secretly trying to determine who might be the robot in hiding.
Pam and Moore discover that Power (Rene Auberjonois) and his wife, Ruth (Ronee Blakeley) are estranged. He desires more fame, fortune, and fans.  She wants a home and children.
The robot is outed as a member of a band, and John must destroy the machine -- who has become a living bomb -- while the band's plane is in flight. 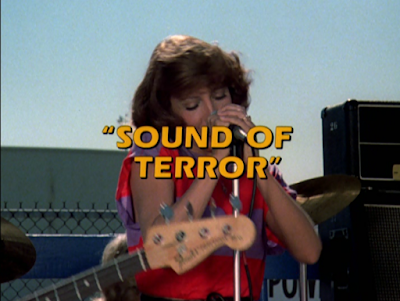 The third episode of Beyond Westworld focuses on a key issue of 1980: nuclear power, and anti-nuke demonstrations. Here, Quaid uses protesters to steal nuclear materials, essentially using their own agenda of peace against them.
Also, the whole "Power and Ruth" act seems like a fictional corollary for the then-popular act, The Captain and Tenille. 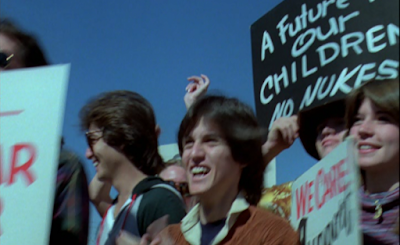 Once more in "Sound of Terror," a totally unmotivated close-up reveals the identity of one robot, early on, and is then followed almost immediately the by-now familiar robot P.O.V. shot.
I call this approach anti-suspense.  The editing and shot choice telegraph the identity of the robot, so no one will be too surprised, I suppose. I guess the series had to be family friendly, so that the robots wouldn't really scare people.
But as a consequence, these episodes are not compelling at all.
Later in "Sound of Terror," another robot is unearthed, wearing heart-shaped sun-glasses, a fashion choice which sort of undercuts his menace.
And the scene in which Moore opens a plane door while it is in the air is also undercut by the explosive decompression effects.  The robot sort of slow-walks out the plane door....backwards. 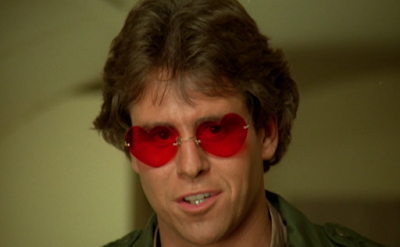 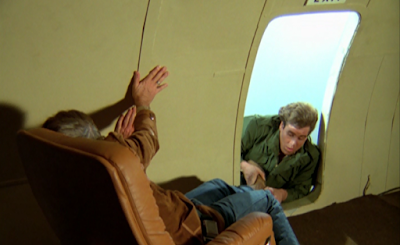 Intriguingly, the robot grabs Moore's boot on the way out, and falls out of the plane in a great stunt that clearly forecasts a similar one in The Living Daylights (1987).  There again, a boot was involved ("he got the boot...).
Again, I just want to point out that this could have been a much more powerful story with just a few tweaks.
What if Ruth was actually the robot?  What if her drive to be a mother, and have a home...was programmed?  What if she discovered she was a machine, incapable of being a mother?  What if the only thing she could give life was the nuclear device in her chest? 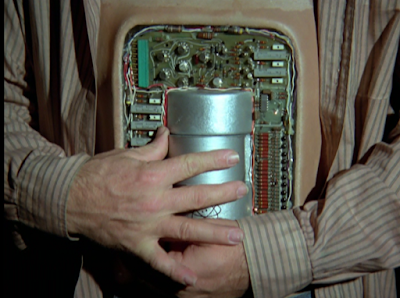 That would have been an affecting, amazing story.
But instead we get this dull story, another runaround that ends with lame fisticuffs and another robot easily destroyed.
at February 18, 2021