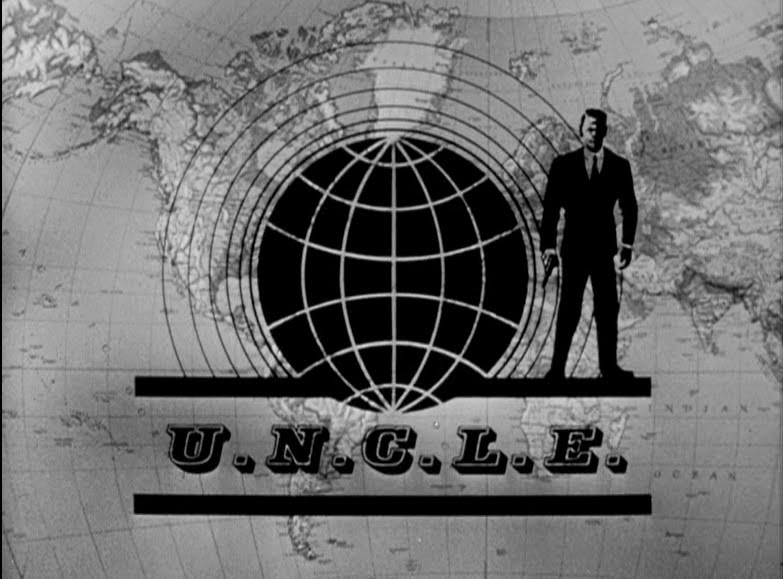 After THRUSH agents invade U.N.C.L.E. (United Network Command for Law and Enforcement) headquarters in New York City, agent Napoleon Solo (Robert Vaughn) of Section 2 stops them in their tracks.  Their mission was to assassinate the organization’s leader, Alexander Waverly (Leo G. Carroll) before he could act on vital new intelligence information.
That intel, however, reveals a problem. A visiting African premier, Sekue Ashuman (William Marshall) will be assassinated in the factory of a wealthy industrialist the following day.  THRUSH hopes his death will de-stabilize the region and foster chaos.  Complicit with THRUSH is the American industrialist, Andrew Vulcan (Fritz Weaver).
Solo recruits a housewife and Vulcan’s former girlfriend, Elaine May Bender (Patricia Crowley) to romance Vulcan and learn more about his plans. She will pose as a wealthy widow and attend a party thrown by Vulcan in the premier’s honor. Elaine is reluctant at first to go on this assignment, but soon she is so overtaken with the excitement and glamor of the job that she laments the need to return home to normal life.
Meanwhile, THRUSH agents are on to Solo, and plan to execute him. They booby trap his car, and send it careening into a lake… 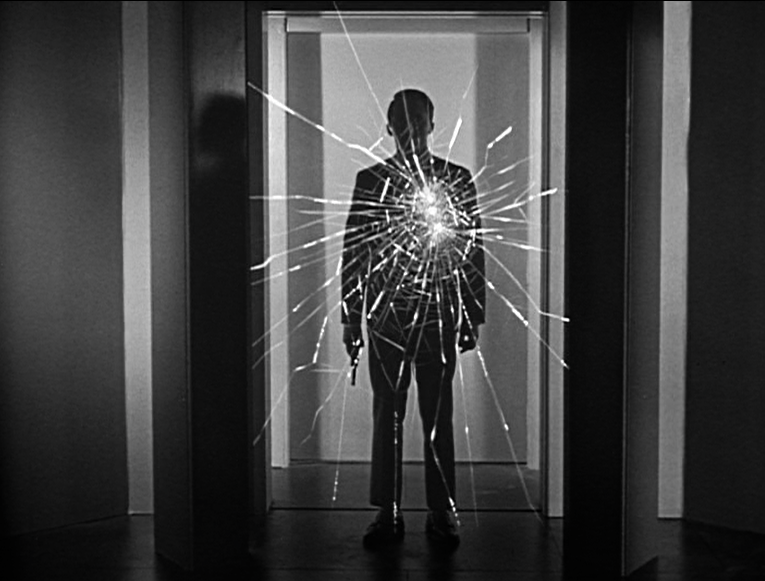 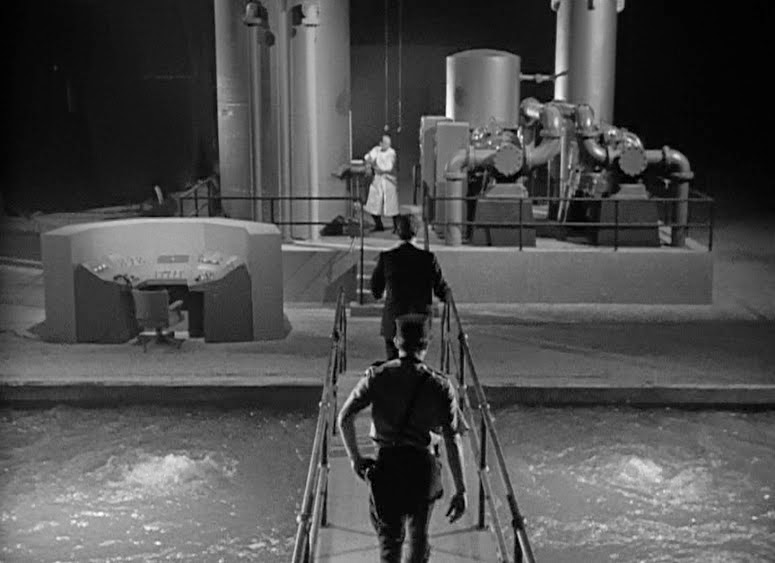 The first episode of The Man from U.N.C.L.E. (1964 – 1968) opens with a rush of action and excitement, as U.N.C.L.E. HQ falls under siege by enemy agents.
Using explosives and firearms, these agents penetrate several levels of the organization’s defense, but hit a roadblock in the form of Vaughn’s Solo, who gets a splendid introduction. 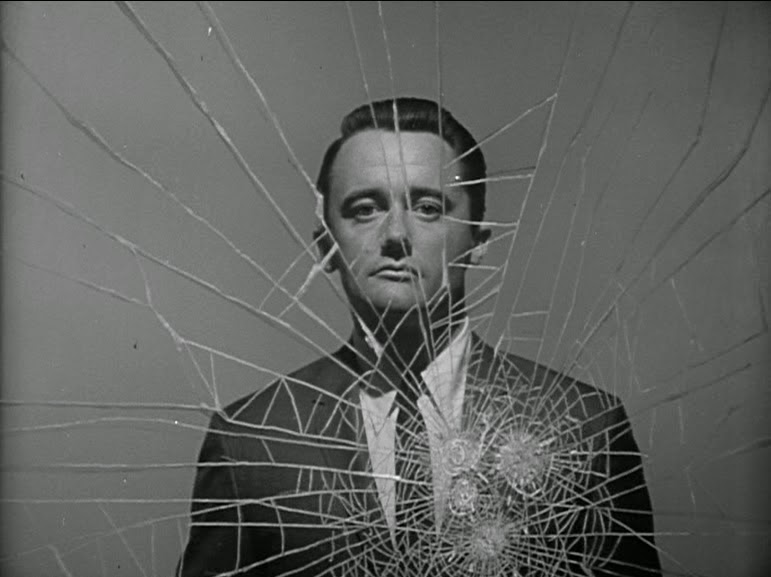 In particular, we see Solo’s dashing, impeccably dressed figure and visage behind a screen of broken, spider-webbed glass.
He emerges from behind that barrier, moves with purpose and velocity, and kills the killers.  It’s not exactly the gun barrel opening of the Bond 007 films, but it’s a wonderfully visual, and an effective intro for the character.
The set-piece -- also in the tradition of Bond pre-title sequences, actually -- has precious little to do with the rest of the episode, which focuses on a house-wife turned secret agent, Elaine (Crowley), and her efforts to get an ex-boyfriend-turned-THRUSH operative, Vulcan, to spill the beans about his nefarious plans to assassinate a visiting dignitary.
This plot-line is handled extremely well, from Elaine’s recruitment to her assignment to her understandable reluctance to return to a normal family life after being a secret agent.  Elaine is the story’s anchor, or grounding, the every person who is suddenly thrust into a word of espionage, danger and romance.  She's our entrance point into a fantastic world.
“The Vulcan Affair” also includes some nice twists and turns regarding the assassination attempt, and the exact loyalties of Marshall’s character.  Before the episode is over, both Solo and Elaine stand betrayed, and end up tied to a steaming hot pipe in close proximity to a deadly reactor. Again, a comparison to Bond is worthwhile.  In "The Vulcan Affair" we get a deadly trap for our heroes, and a view of a villain's fantastic (and dangerous) lair. 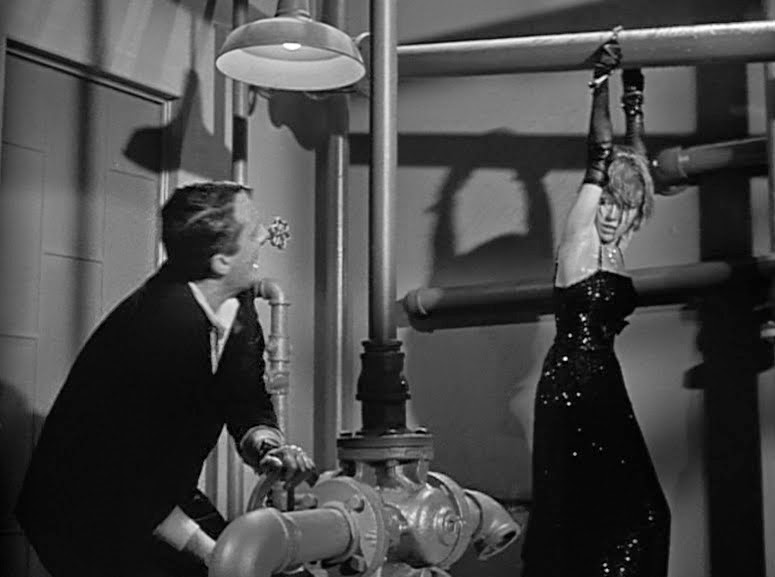 Also, there’s a wonderful moment near the end of “The Vulcan Affair” in which Elaine and Solo acknowledge an attraction for one another (borne, perhaps by the danger they share in Vulcan’s factory).
Both of them sort of linger for a moment, as if to contemplate these unspoken feelings, and the possibilities, should they act on them. But Solo sends Elaine back to her family quickly, and settles for a flirtation with a stewardess. 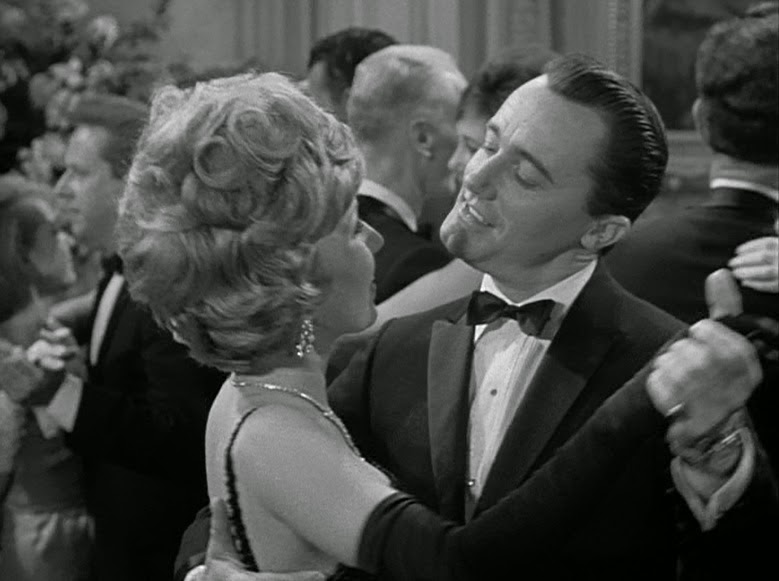 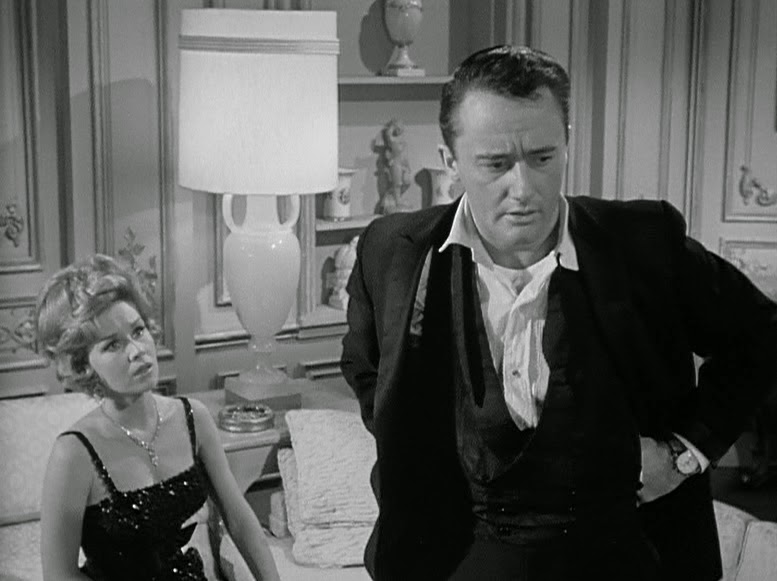 Still, there’s a powerful moment where you can see Solo’s conflict on his face. There’s a second -- just a second -- where he clearly imagines what could be. The fact that he doesn’t act on that possibility, perhaps, delineates him from 007 (and the format of TV from the big screen).
Quite simply, the a network series of the 1960s simply couldn’t have its protagonist having a liaison with a married woman.
I’ve long been a huge fan of Robert Vaughn, and to me, he will always be Napoleon Solo, the debonair, fast-talking, fast-thinking spy. He actually resembles Sean Connery here quite a bit (which was no doubt the point), and yet Vaughn projects an identity all his own too.
Solo is a great, resourceful thinker, and we see in “The Vulcan Affair” how he constantly “handles” Elaine to keep her on task, and keep his mission on track.  There’s a lightness, on the surface, to Solo, but just beneath the surface is a dedicated, even grim operative who puts -- forever and always -- assignment first.
The guest stars in the episode are impressive as well, but especially Patricia Crowley. She creates a character who is easy to like, and whom we sympathize with strongly.  She never comes across as weak or helpless.  Instead, Elaine notes her fear, and does her best to cope with it.
Long-time fans of the series will note that Ilya Kuryakin (David McCallum) is given almost no screen time at all here, and could hardly even be described as a supporting character. This balance would change, of course, as Ilya became the breakaway character on the show.
Also, “The Vulcan Affair” features the first reading of the famous catchphrase of the series, “Open Channel D.” Though here, it is modified a bit as “Channel D is open.”
I hadn’t seen The Man from U.N.C.L.E. in quite a long time, and watching “The Vulcan Affair” it reminds me how well the episodes are assembled. This inaugural show is pacey, thrilling, and strongly focused on the choices that the characters make.
at February 09, 2021