Planet of the Apes: "The Legacy"

In “The Legacy,” refugees Virdon (Ron Harper), Burke (James Naughton) and Galen (Roddy McDowall) travel to the ruins of a 20th century city and discover a government think-tank there.
The hologram of a long-dead scientist informs the visitors that in buildings around the world are seeded discs containing crucial scientific information that can save the human race.
One such vault is in this very city.
Unfortunately, the ancient computer needs to be recharged, a task that becomes of primary importance to Virdon in his quest to return home to his family and the 20th century.  He and the others separate, in hopes of procuring supplies which can help them build a re-charger.
But Virdon is promptly captured by General Urko (Mark Lenard) and Dr. Zaius (Booth Colman) and held in a 20th century building that resembles a castle.
There, Zaius hopes to use a captured human female, Arn (Zina Bethune) and child, Kraik (Jackie Earle Haley) to gain Virdon’s confidence, believing that humans are “extremely vulnerable in family situations.” 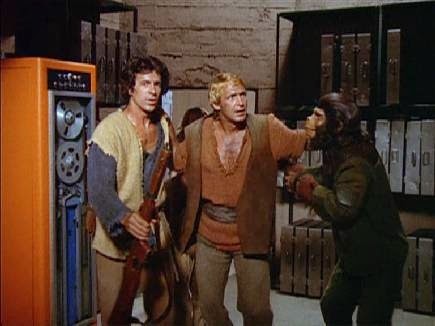 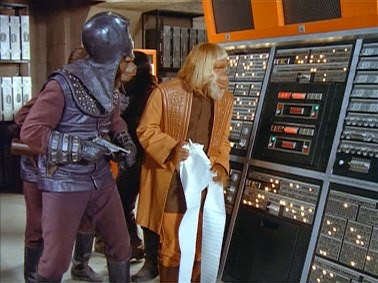 “Could man have ever known so much and done so little with it?” Galen asks his human friends in “The Legacy,” and that’s a good question.

It’s an interrogative that gets right at the undercurrent of social commentary that runs through the 1974 series, and reminds viewers that man, after a fashion, is responsible  -- in this universe at least -- for his own destruction.
Unfortunately, the idea is not presented as clearly or as cleanly as it might be on Planet of the Apes because of some of the staging/background information/costuming choices we get here. 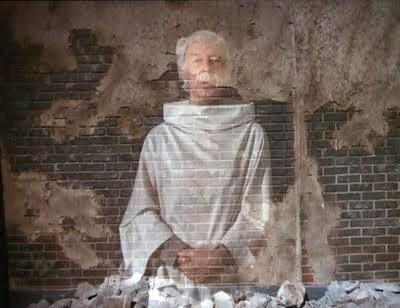 For example, the hologram of the human scientist (Jon Lormer) appears at one point, and we see a wise old human in a futuristic kind of lab-coat or outfit.  How are we to square this gent’s futuristic appearance with the fact that the human race killed itself, essentially, in a nuclear war?
How did humanity become advanced and destroy itself, in other words?  I don't believe that Virdon and Burke wore clothes like this in their everyday lives, so the implication is that this human existed long after they disappeared.

So why does the city look so...mid-20th century?
The Planet of the Apes TV series never quite explains these contradictions. The apes must rise because humanity falls. And humanity falls because of the species’ own, flawed, warring nature.  But this guy looks pretty peaceful and serene.
Overlooking this problem in internal historical consistency, “The Legacy” is still likely one of the stronger episodes of the short-lived series in part because it at least attempts to move forward the overall story-arc about the fall of man, and the mechanism by which Virdon hopes to return home and warn the species.
The episode’s title “The Legacy” also works dramatically in a number of intriguing ways. One of mankind’s legacies is the destroyed city itself, a place that was once a paradise but is now in ruins.

To put a fine point on the matter: Destruction is humanity's legacy.
The vaults filled with scientific knowledge also represent man’s legacy.  They symbolize his ability to look to the future even when all seems lost in the present. Virdon is understandably giddy about excavating this particular legacy.  He waxes poetic about the idea of a “lot of long-forgotten ideas that would make this a nicer world.”

In part, this is because Virdon is an optimist.  Even after everything, he would rather see the good in mankind than the evil.
Similarly, we might think of the a legacy in terms of Zaius’s dialogue about humanity being vulnerable in family situations.
Virdon is a family man through and through, and that legacy of family leads him to accept Kraik and Arn as family members, at least after a fashion.  But the idea of family proves not to be the deadly weakness that Zaius hopes, but rather the strength by which the humans survive and endure.

Eventually, this human family comes together, and escapes the trap Zaius has set.  Perhaps our legacy is that in bad times, we stick together, and accept others into our "tribe." 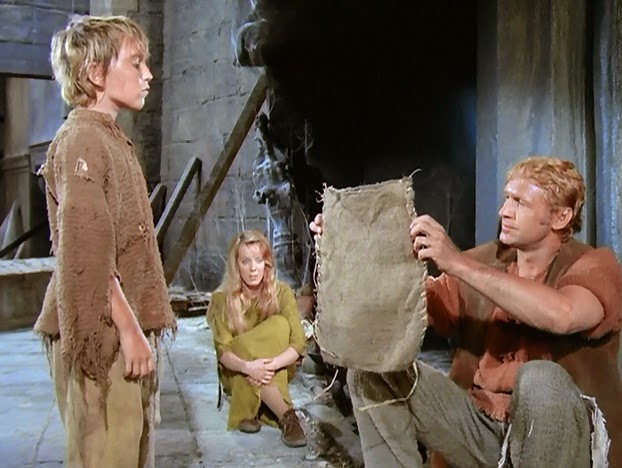 Finally, Virdon makes specific mention of a legacy in regards to the human custom of the hand-shake.  He notes that people don’t really know why they do it….they just do it.  The original purpose for the hand shake (involving the drawing of a sword...) is long since inoperative by the 20th century, and by Virdon's time. Yet the tradition endures.
This raises another significant question about mankind.  Is he simply a mindless being who does things by rote, because they are familiar to him?  Does this account for his propensity to make war?
Or does man lean on tradition and convention because they honor who he hopes to be as a species?  It is true that he makes war, but he also clings to family.
The idea of legacy, threaded throughout the episode, makes this installment a fairly-layered and compelling one.
Unfortunately, the story arc about the knowledge vaults introduced in “The Legacy” is never continued in the short-lived series.  It would have been great to see the astronauts go in search of and perhaps find another vault, one possessing different secrets.  This is a series with such a rich backdrop, and such rich potential.  And yet most of the stories fail to mine the possibilities.
at February 23, 2021