Planet of the Apes: "Up Above the World So High"

In “Up Above the World So High,” Galen (Roddy McDowall) spies a human flying a high glider.  Unfortunately, the pilot has also been detected by a curious gorilla patrol.
The fugitives make contact with the human pilot, Leuric (Frank Aletter), who has not quite perfected his hang glider.  He is suspicious that they want to steal his invention.
Shortly afterwards, an ape scientist, Carsia (Joanna Barnes), also makes contact with Leuric, and gives him the materials he needs to build a functional glider.
She has a dastardly plan. She intends to use 20th century fragmentation bombs to destroy the ape council of Central City, a decapitation strike and coup that will create a new ape order.
Now, the fugitives must make sure that flying is seen as an impossibility, an act which requires Galen to be the first ape pilot in history. 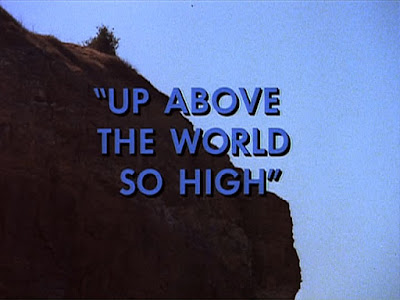 “Up Above the World So High” is the second Planet of the Apes (1974) episode in two weeks that features the threat of weapons of mass destruction, and an upturning of the social order.
In “The Liberator,” a human sought to use toxic gas to kill the ape overlords and free his people. Here, a human pilot’s creation of a glider has dark consequences. A chimpanzee insurgent wants to use the glider as a delivery system to destroy the Ape Council; using fragmentation bombs – another relic of the twentieth century and man’s self-destructive nature. 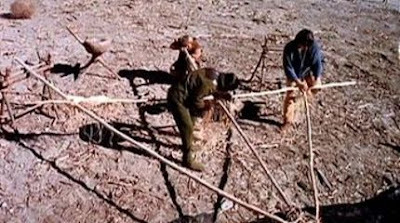 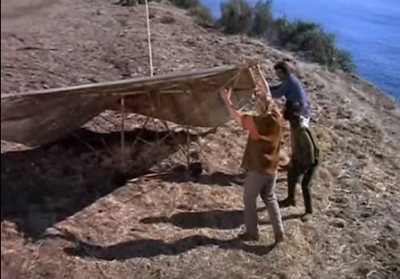 Perhaps these two stories appear at the end of the run because the earlier stories seem, well, inconsequential. The stakes tend to be “freedom,” or “escape.” In “Up Above the World So High” and “The Liberator,” the stakes are raised. The possibility of social disorder is high. If Galen, Virdon and Burke fail, people -- apes and humans -- will die.
This story is also an unusual inversion of the typical formula. Usually, Virdon and Burke embrace enlightenment and progress. They show the world of the future how to fish more efficiently (“Tomorrow’s Tide”), cure Malaria (“The Cure,”) and undertake blood transfusions successfully (“The Surgeon.”) In all these stories, enlightenment wins out over ignorance.  In this final tale, however, they sabotage flight intentionally, keeping that advance from the Dark Age world, so that it cannot be abused by power hungry people such as Carsia. Perhaps flight is too much, too fast, given the divisions and ignorance of this future world.
Still, I can’t believe that Carsia won’t try again, with or without the help of Leuric. I find her a fascinating character, both in terms of her intelligence and ambition. I wonder if, at some point, Wanda, the brilliant chimp we met in "The Interrogation" was intended to return in this episode. 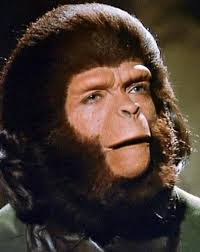 One bizarre aspect or theory about the Planet of the Apes series that I find intriguing is this: Burke, and Virdon, essentially, prove the fears of Urko and Zaius.
Just months after these future astronauts arrive near Central City, ape culture faces threats from nerve gas and fragmentation bombs, both products of man's self-destructive nature. Early on in the series, we heard Zaius and Urko lamenting how the astronauts promise to bring threatening ideas with them. Of course, it’s just a coincidence in terms of timing, but that’s precisely what occurs, it seems.
So far as execution is concerned, “Up Above the World So High” leaves much to be desired, particularly in its final act.
While still in the sites of the apes, Galen, Leuric and the others are seen paddling away in the ocean.  Are we to believe that the apes didn’t go search for bodies? Or follow up to see if they survived?  OR recover the remains of the aircraft?  Here, our heroes (and the secret of flight, incidentally), make the lamest, most obvious escape imaginable.
And sadly, that’s our very last view of the series’ heroes. One can’t help but feel that the 1974 series represents a missed opportunity on a colossal scale. Some individual episodes are good, indeed, but there is no urgency or dynamism to the program.  It often feels small potatoes somehow.
at February 26, 2021