Land of the Lost: "Hot-Air Artist" 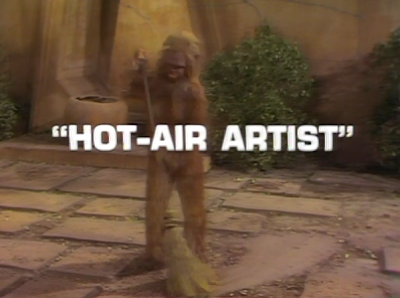 Every time I write something upbeat and positive about Land of the Lost’s third season, I’m rewarded with a dreadful follow-up show like this one, “Hot-Air Artist.”
Last week, I found “Flying Dutchman” atmospheric and creepy, and generally well-vetted, and here we get a story that follows precisely the same beats, only with a different guest star of the week.
In “Hot-Air Artist,” a balloonist and adventurer, the self-important Colonel Roscoe Post (David Healey) arrives in the Land of the Lost through a hurricane-like vortex, and offers to take the Marshalls home on his journey, but only if they can help him repair his gondola and balloon. This mirrors Captain Van Der Mere’s offer in last week’s episode, with the Marshall’s trading a negotiation with Malak (and a return of stolen items) for passage home. 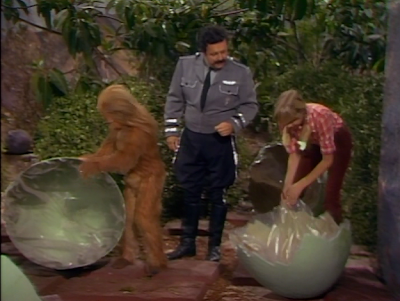 But Post’s offer of escape, like the Dutchman’s, is not genuine. As the Dutchman secretly coveted Holly for companionship, Post here plans to escape from the Land of the Lost only with Chaka, whom he sees as a “missing link” and a kind of cash cow. He plans to exhibit the tiny Paku all over the world…at steep prices, and he even tricks Chaka into believing they will visit Pakuni cities together.
As in “Flying Dutchman,” Jack perceives the threat at literally the last instant and arranges a rescue before the guest villain of the week can depart the Land of the Lost with an unwanted traveler. Here, Chaka jumps from the gondola in flight and escapes. Meanwhile, Post merrily flees the prehistoric terrain.
So, all the narrative points of “Hot-Air Artist” align exactly with those in “Flying Dutchman,” making the the episode an absolute rerun, only with a balloon replacing a man-of-war, the blustery, self-important Post replacing Captain Van Der Mere, and Chaka replacing Holly. It’s creative bankruptcy at its worst, and I would hasten to add that kids are quick to pick up on such things. 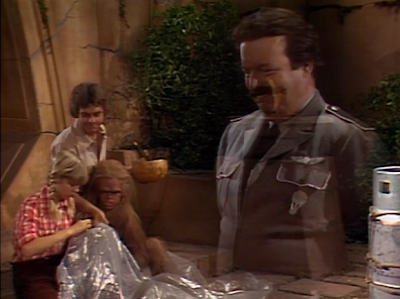 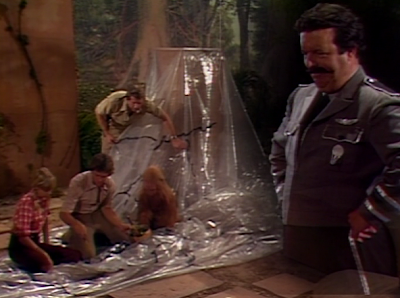 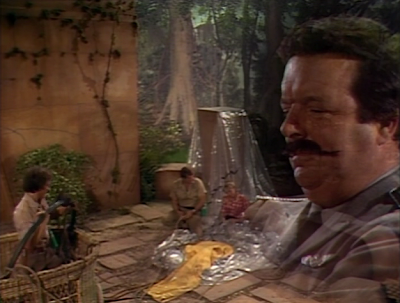 One tenet of Land of the Lost originally was that it would never talk down to its (resourceful) audience of children, instead fostering imagination with challenging tales of time loops, closed pocket universes and the like.  I would argue that “Flying Dutchman,” despite some continuity problems, lives up to that ideal since it concerns world mythology, but that “Hot-Air Artist,” in recycling the same story just one week later, fails to do so.
Speaking of continuity problems, “Hot-Air Artist” has some weird touches. For instance, we see Sleestaks in the Library of Skulls tapping on human skulls as though they are drums. How did this particular ritual get started?  And where did the human skulls from?
On the other hand, it’s nice that Chaka takes a moment in the episode to remember “Stone Soup,” A Rick Marshall creation from early in the season’s run.
Finally, one just has to take a deep breath and acknowledge that visitors are arriving in the Land of the Lost willy-nilly now, with no pre-text of reason or rationality. We learned in the first two seasons that the Land maintains a constant sense of balance, and that for someone to enter Altrusia, someone must also leave…at the same time. Yet in two weeks here, we’ve had two visitors -- by sea and by air -- with no explanation whatsoever. At this point it seems that no one is even trying to be true to the series’ stated history.
Dramatically-speaking, the original rule was smart writing. It meant that the Marshalls had very little chance of escape, unless they were able to balance the mechanisms of Altrusia.  Under this new rule, people come and go all the time – Dutch Sea Captains, Hot Air Artists from the 1920s, and even Cowboys and Indians (“Medicine Man”) and so it is tough to believe that given so many visitors and so many opportunities for escape the Marshalls always end up stuck.
Call it the “Gilligan’s Island” effect.
at February 06, 2021