Land of the Lost: "Timestop" 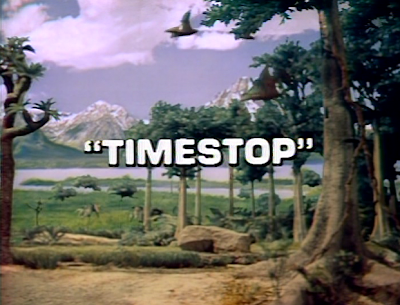 Perhaps no other episode of Land of the Lost, Season Three better epitomizes the good and the bad of this span in series history than does “Timestop.”
On one hand, the episode is boosted by a fantastic premise: the exploration of the “closed” portions of the mysterious old temple where the Marshalls have taken up residence since High Bluff was buried in "Aftershock."
On the other hand, this episode badly mangles its story of a “time regulator,” so much so that one wants to scream at the television in frustration.
In “Timestop” another tremor in the land of the lost cracks open a previously-closed dark passageway in the old temple, and into the nearby mountain itself.  Holly (Kathy Coleman) and Will (Wesley Eure) go to investigate the new opening, and find a strange cavern.  In that cavern is a crystal that looks and acts like a compass, one adorned with ancient Altrusian writing.
The Marshalls ask Enik (Walker Edmiston) about the relic, and he confirms that it is the key to the “Time Regulator.”  The key can run time forward or backward for the user, and Enik very much wants to return to his time in the distant past to prevent the Sleestak evolutionary slide into primitive barbarism.  Instead of allowing Enik to use the Altrusian relic, however, the Marshalls decide that they can use it to get home.
To fully deploy the key, however, the Marshalls must use a pylon located near some geyser beds, one that regulates time.  When Chaka is trapped by Torchy near the geyser, however, the Marshalls must use the relic to save their Pakuni friend from trouble.  After doing so, they discover that Torchy has fused shut the Time Regulator Pylon and therefore the key can never be utilized again. 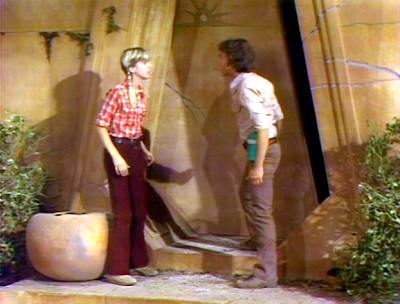 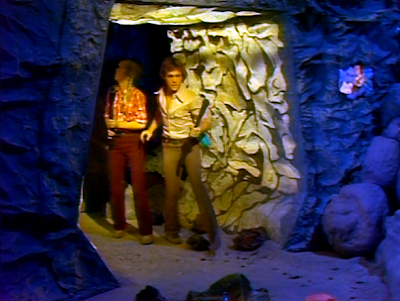 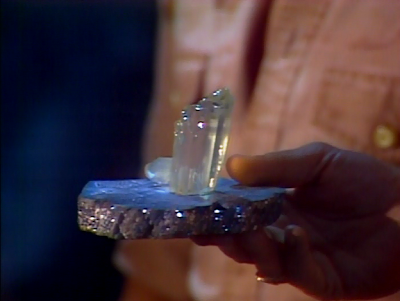 In defense of “Timestop,” I must acknowledge that I am very gratified that the series finally takes time to focus on the Old Temple, and explore one of the dark, unexcavated doorways that have been visible on camera, but never mentioned, nor charted.  I always love Land of the Lost when the series involves the discovery of new elements of Sleestak society, or of Altrusia’s strange, ancient landmarks and mechanisms.  So the premise here is indeed a great one, and the first act of the installment is dominated by mystery and excitement.  It's a really, really good start.
But then the key to the time regulator is introduced and the episode goes downhill swiftly because, frankly, the Marshalls act selfishly, and without sufficient thought about how Enik’s actions might impact them. 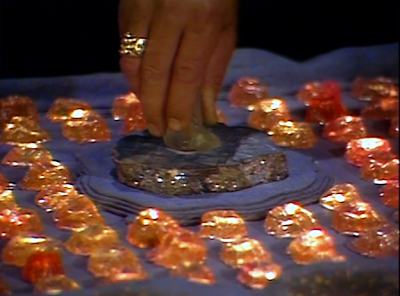 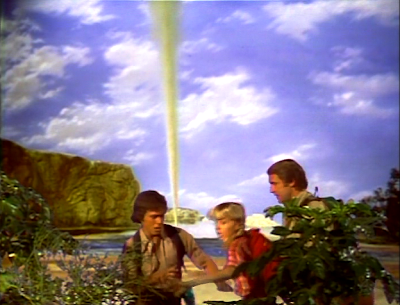 Bear with me as I explain.  The Marshalls want to use the time regulator to prevent themselves from falling into the land of the lost in the first place.  However, if they agreed to Enik’s plan, this would also be the outcome, and the strategy would have the added bonus of saving an entire species from degradation.
If Enik went back in time and prevented the downfall of Altrusia, it is very likely that the portal opening to Earth would be monitored by his people, and that the Marshalls would not fall through in the first place.  Hence, the Marshalls would get what they want.
Contrarily, if the Marshalls did happen to fall through the portal, they would find an advanced, peaceful race dwelling in Altrusia, not a wild jungle and the devolved, dangerous Sleestak.  The advanced Altrusians -- with no reason to fear or hate the Marshalls -- could readily manipulate their own technology to send the Marshalls back home.
So it makes absolutely no sense for the Marshalls not to go with Enik’s plan, as it would essentially free them from captivity in the land of the lost, or at least make their lives there much easier.  A clever writer might have allowed the Marshalls to trust their friend, and for Enik to take the Time Regulator back in time to make his attempt to save the Sleestak.  He could have failed, and nothing might have changed.  And indeed, that outcome would have kept the Marshalls in the land of the lost for future episodes.
Instead, the Marshalls show an inability to trust, and are forced to waste the time regulator on saving Chaka from Torchy and an Old Faithful-like geyser.  But, of course, they still are not thinking logically, even in this instance. They could very well let Chaka die in their timeline, and give the regulator to Enik, so that he would change the past.  By changing that past, Chaka’s “present” (including his untimely demise) would also be altered.  In other words, the Marshalls could escape, the Sleestak could thrive, and Chaka could live.  Why the heck doesn't a smart guy like Uncle Jack (Ron Harper) realize this?
This is the same problem that plagued (and in some sense ruined) Star Trek: Generations (1994).  In that film, as you’ll recall, Captain Picard (Patrick Stewart) used the Nexus to go back only to the moment before Soran (Malcolm McDowell) launched a missile at a nearby star.  Instead, Picard could have gone back to the moment Soran first boarded the Enterprise, to apprehend him there.  He could have gone back to any other point in time, essentially, and had a much better chance of successfully altering the present.  Instead, Picard went back only to the point of highest danger, and the most recent point in the time line.  This faulty thinking made no sense there, and it makes no sense here in Land of the Lost.
Next week: “Ancient Guardian.”
at February 20, 2021