Mr. Schubert’s (Victor Buono) failed plans to rule the world have sent the mad genius into bankruptcy.
Now, however, he has a plan to escape financial disaster: he will unleash his giant jellyfish -- “a slathering carnivore” -- upon the seaside community of Baron’s Landing.
Worse, C.W. (Alan Fudge) is in charge of an international swimming contest at the same beach. Under the alias of King Neptune, Schubert plans to create havoc for the global swimmers.
Mark Harris (Patrick Duffy) and Dr. Merrill (Belinda Montgomery) investigate the menace in the water, and seek to learn the identity of King Neptune. 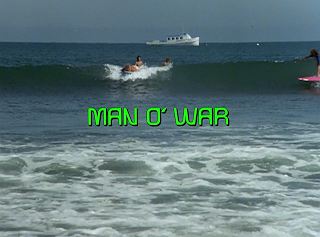 “Man O’War” is the worst episode of Man from Atlantis (1977) so far, in part because it is the installment that most clearly and overtly mimics the campy tone of the Adam West Batman (1966-1968) series.
Here, a giant jellyfish -- depicted via a prop that is obviously a large balloon – wreaks havoc on a swimming contest. Meanwhile characters must deliver cringe-worthy lines of dialogue like “Jelly fish have absolutely no sense of responsibility.”
Similarly, Schubert even makes a Jaws (1975) joke. When his assistant notes that they should send out a great white shark instead of a jellyfish to menace Baron’s Landing, Schubert replies “it’s been done.” 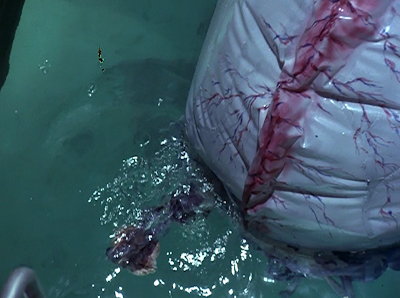 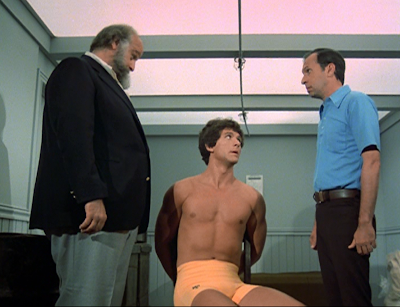 Once more, a Man from Atlantis episode raises a lot of questions in terms of internal logic and consistency.
How is it that no one in the Institute, or even the larger Federal Government, is keeping an eye on Schubert’s activities, or at least his whereabouts?
This is a man, after all, who a few weeks earlier catastrophically accelerated global climate change with his microwave device, and caused millions of dollars of damage. This is a man who caused power shortages around the world, two weeks later.
He’s not a guy who, it would seems, could operate under the radar.
worse, the episode’s finale is also of Ed Wood-like proportions. Mark is “attacked” by the jelly fish, and it is abundantly clear that poor Patrick Duffy is struggling against an inert, lifeless foe.  He gives the scene his all, as he does throughout the series, but the stories and the execution of those stories continue to stymie his efforts.  The effects let him down. 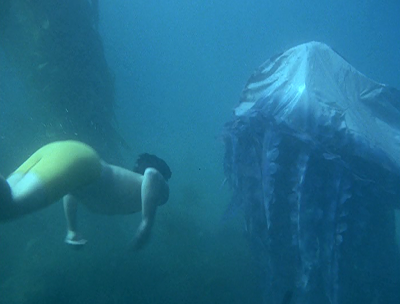 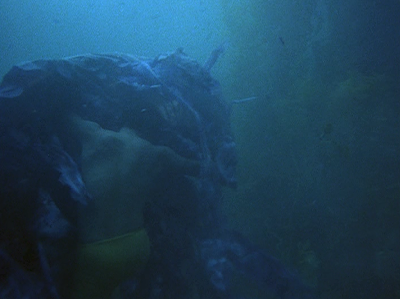 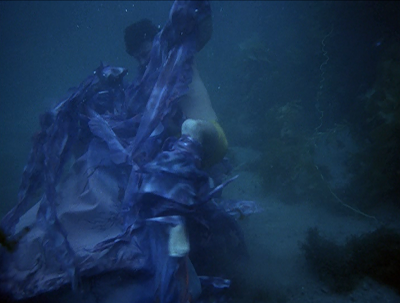 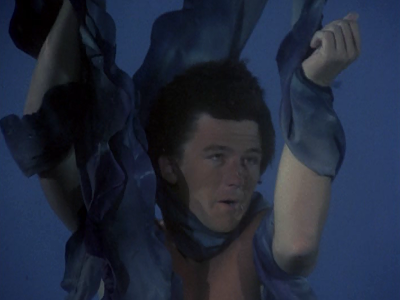 I do like that peace is forged, in the episode’s conclusion, by Mark’s ability to communicate with the giant jelly-fish.
Again, this strikes me as very Spock-like. Many times in Star Trek history, Spock used his native ability to mind meld to communicate peaceful intentions to alien beings (“The Devil in the Dark,” is a prime example).  Mark can communicate with sea life, and he uses that ability to re-direct the jelly fish towards benevolence in this installment.
at February 04, 2021